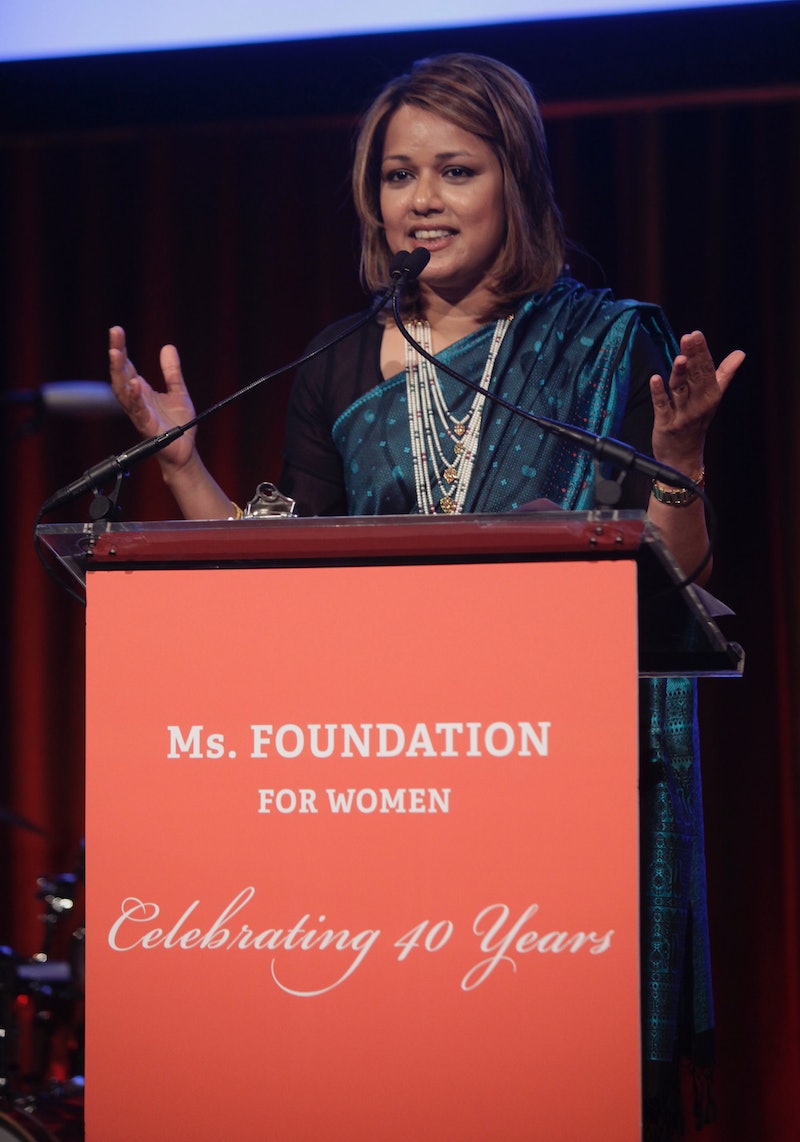 Ecofeminism is not exactly a household name — yet. Premised on the belief that how cultures treat the environment is inextricable from the oppression of women, ecofeminism is a growing movement. Recently, Bustle talked to the activist Anika Rahman about how environmental justice and global feminism are inseparable to her, and how she views her environmental advocacy and her fight for reproductive rights as parts of the same thread.

Since the early 1990s, Rahman has been hard at work advocating for reproductive rights. She was the founding director of the International Legal Program for the Center for Reproductive Rights, a nonprofit that advocates for safe and legal access to birth control and abortions worldwide. During the past few decades following the launch of the Center for Reproductive Rights, Rahman has continued to focus on championing global reproductive rights as the CEO of the nonprofit Ms. Foundation for Women. Even more recently, she's worked as the vice president of development at the Rainforest Alliance, which does international nonprofit work focused on preserving biodiversity.

While talking on the phone with Bustle, Rahman shared how feminism that drew her to environmentalism. To her, concerns about harming the planet and systemically abusing women are strongly intertwined.

"If you want to create an unjust and unsustainable world you will attack the environment and abuse women, girls and LGBTQI communities," Rahman says over the phone, "This is a rather dystopian view of the world, to divorce the people from the planet. I believe the only way for humans to flourish as equals across gender is to work with the planet and taking care of the health and well-being of both."

There is a rich history of spiritual connections drawn between women and the earth. For example, the North American Indigenous Algonquin tribe believed in the Nokomis, also known as The Sacred Mother Earth or the The Grandmother, a goddess who floated in the wind swelling with pregnancy until she grew as large as the earth, soon birthing all living creatures.

There are also real-life parallels between oppressing women and mistreating the environment, which Rahman brings up when she talks about the problems women face when it comes to agriculture.

"Millennials actually have grown up in the time where we've had a better awareness of environmental and sustainability issues than previous generations."

"Women compose 40 percent of the workforce in agriculture, yet women own less than 20 percent of the land," she says. "If women had the same access as men, women farmers, we could reduce global hunger by 12 to 17 percent, which would be roughly reducing hunger for 100 million people."

There are other overlaps between treatment of women and treatment of the environmental, as well, according to Rahman. "There's a deep philosophical reality, the conditions in which natural disasters occur and how women are disproportionately affected, the rising number of women refugees," she says. "Then, you understand the link between these issues."

In the course of our conversation, Rahman does note a positive generational shift in the growing recognition of ecofeminism among millennials as a philosophy that is not only valid among activists, but critical for holistic problem solving.

"If you really believe in the connection between the planet and the people, then you know that our fates are interlinked across nations."

"Millennials actually have grown up in the time where we've had a better awareness of environmental and sustainability issues than previous generations," she says. "I think that's heartening. To other people who have more conditional notions of both women's rights and climate change, I think it's less obvious."

Pursing her career on a global level, both for viable women's health care and biodiversity, has also deeply informed Rahman's philosophies of the entanglement between the issues.

"I was drawn to [environmental work] because in nearly half the countries in the world, women don't have equal access or the right to own land," Rahman says. "Women cannot legally own land, that's pretty astonishing and shows our ability to control and restrict economic resources."

Moreover, in focusing on ecofeminism, Rahman says she has realized how interconnected the problems of one country are to the whole world — in terms of the environment and its women. "No nation is an island, even an island nation," she says. "If you really believe in the connection between the planet and the people, then you know that our fates are interlinked across nations."