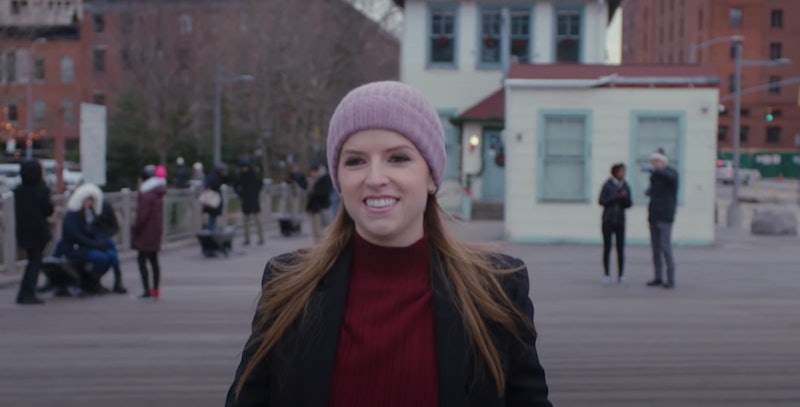 With everyone still stuck at home, practicing social distancing, why not live vicariously through Anna Kendrick's trials and tribulations of falling in love in New York City? The first trailer for Anna Kendrick's HBO Max series, Love Lives promises the ultimate rom com series, chronicling her character, Darby, as she attempts to find true love and build a career over the course of several years in New York.

"I just want to be the kind of woman who knows what she wants, and isn't afraid to go after it," Darby says to her best friend Sara, played by Zoe Chao, in the middle of a "life panic" about both her love and work lives. "You deserve to be loved for the little "derp-de-derp" that you are," her friend responds. However, her other bestie, Mallory — played by Sasha Compere — has a different perspective, which seems to imply that Love Life won't just be about Darby finding happiness through romantic love. "Why do you need a boyfriend right now?" her friend asks. "This isn't Jane Austen times, I'm sorry!"

Of course, there are still plenty of classic, charming rom-com tropes to be found, including Darby's awkward run-ins with her ex, a quirky job curating a museum tour of "historically significant butts" and the phrase "d*ck wagon" making a cameo in a motivational speech. Add in Kendrick's ability to make a story about throwing up at her boyfriend's father's wake sound charming, and Love Life proves that the Oscar winner is the rom-com heroine we've been waiting for this whole time.

In addition to chronicling Darby's journey towards confidence and independence, Love Life will also follow Darby over the years from her "first love" with her childhood sweetheart to finding "lasting love" with guest stars like High Fidelity's Kingsley Ben-Adir. According to Deadline, each episode of Love Life will tell the story of a different relationship in Darby's life, to make up a season-long chronicle of her romantic life.

However, once Darby's story is wrapped up at the end of the first season, Love Life will turn into an anthology season, with a brand new actor playing the protagonist of every season. Kendrick's season will be one of the new original series' available to stream as soon as HBO Max officially launches on May 27, alongside On the Record, a documentary series about the #MeToo movement in the music industry, Legendary, a competition show focused on the ballroom scene and brand new Looney Tunes and Sesame Street shows.

One buzz-worthy TV event that won't launch with the streaming service, however, is the highly-anticipated Friends reunion special, which was recently postponed due to concerns over the coronavirus pandemic. However, all ten seasons of the iconic sitcom will be available to stream starting on the launch day — and the unfolding love stories of Rachel and Ross and Monica and Chandler should make the perfect counterpoint to Darby's up and down Love Life.