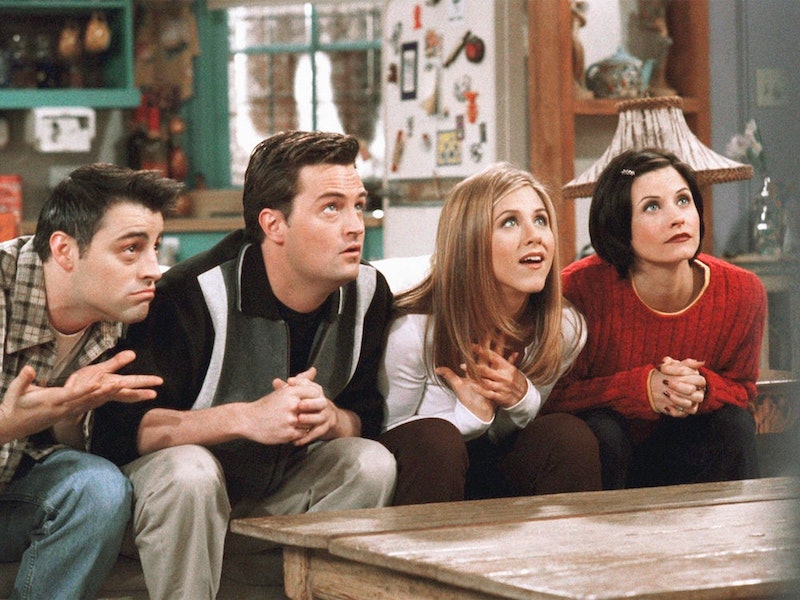 Celebratory Thanksgiving trifles are in order: the Friends reunion special is officially happening. HBO Max confirmed on Friday that Jennifer Aniston, Courteney Cox, Lisa Kudrow, Matt LeBlanc, Matthew Perry, and David Schwimmer are set to reunite for the currently untitled, unscripted special for the streaming service. Friends creators Marta Kauffman and David Crane will return to pen the special, which will launch sometime in May. Along with the special, all 10 seasons of the sitcom will be available on HBO Max’s library of content.

“Guess you could call this the one where they all got back together — we are reuniting with David, Jennifer, Courteney, Matt, Lisa, and Matthew for an HBO Max special that will be programmed alongside the entire Friends library,” HBO Max president Kevin Reilly said in a statement obtained by Bustle. “I became aware of Friends when it was in the very early stages of development and then had the opportunity to work on the series many years later and have delighted in seeing it catch on with viewers generation after generation.”

The statement continued, “It taps into an era when friends – and audiences – gathered together in real time and we think this reunion special will capture that spirit, uniting original and new fans.”

The confirmation comes after reunion rumors initially swirled last November amid the show’s 25th anniversary. Set to serve as executive producers on the special, Aniston, Cox, Kudrow, Perry, LeBlanc, and Schwimmer collectively confirmed the news on Instagram on Friday with the same photoshoot. They all captioned their posts, "It's happening."

The unscripted special comes as a good compromise for fans who have long lobbied for a reunion. In an interview with Rolling Stone last September, Kauffman shut down all possibilities of a scripted reboot and cited inevitable disappointment. “There are several reasons. One, the show is about a time in your life when your friends are your family,” she said. “It’s not that time anymore. All we’d be doing is putting those six actors back together, but the heart of the show would be gone. Two, I don’t know what good it does us. The show is doing just fine, people love it. [A reunion] could only disappoint.”

While an onscreen reunion has been nonexistent, the cast’s frequent reunions documented on social media have long pacified fans. Last October, Aniston made her Instagram debut and temporarily crashed the social media platform with her selfie alongside her Friends co-stars. She captioned the viral post, “And now we’re Instagram FRIENDS too. HI INSTAGRAM.”