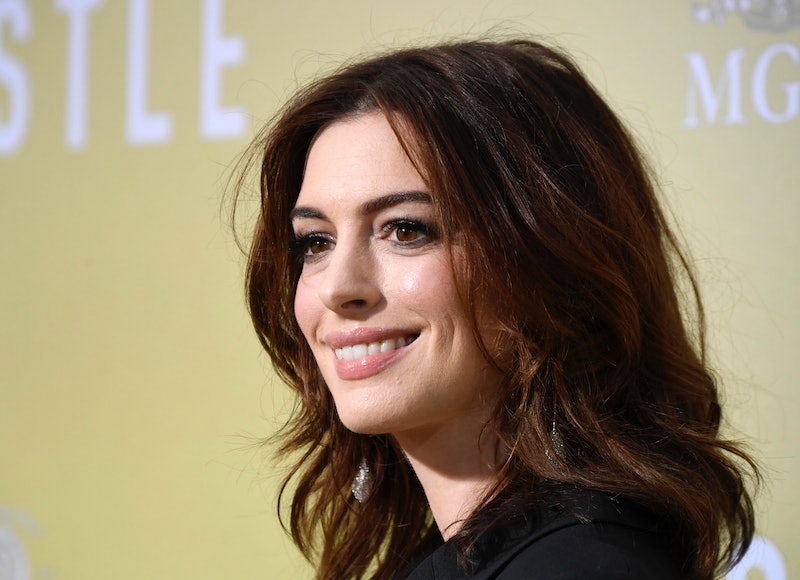 It's been about three years since she and her husband welcomed their first child, and now it looks like they'll soon be a family of four. On July 24, Anne Hathaway announced her second pregnancy with an incredibly sweet Instagram post. She clarified in the caption that neither of her pregnancies were particularly easy, though, and sent love to anyone out there who may be struggling to conceive.

In the black-and-white photo Hathaway shared to make her announcement, her bump is on full display underneath a billowy white tank top. She looks super casual and super happy, and is probably pretty relieved to be able to share her good news with the world.

"It’s not for a movie..." she joked in the caption, just in case anyone out there may have assumed otherwise. "⁣⁣#2⁣⁣. All kidding aside, for everyone going through infertility and conception hell, please know it was not a straight line to either of my pregnancies," she added. "Sending you extra love."

Hathaway announced her first pregnancy via Instagram as well, after she spotted paparazzi taking photos of her on the beach while. She was wearing a bikini and her bump was visible, but she'd yet to tell the public that she was expecting.

"Happy 2016 to my beautiful Instafriends!" she opened in the post. "So, posting a bikini pic is a little out of character for me, but just now while I was at the beach I noticed I was being photographed," the star explained. "I figure if this kind of photo is going to be out in the world it should at least be an image that makes me happy (and be one that was taken with my consent. And with a filter :) Wishing you love, light and blessings for the year ahead!"

Back in November 2012, Hathaway opened up to Vogue about how excited she was to become a mother one day. At the time, she and her husband, Adam Shulman, had only been married a little more than a month, but she totally had babies on the brain already.

"Oh, my God. I want to be a mother, and I anticipate loving my children quite fiercely," she told the outlet. "I think about it all the time, though it's a silly thing to think about because the kind of mother I'll be depends on the kind of children I have. I can't wait to meet them."

Hathaway has yet to reveal whether she'll be having a boy or girl, but she probably won't be sharing many pics of her second child once its born. During an interview with Jezebel in April 2017, she admitted that the one time she posted a shot of her son, Jonathan Rosebanks, she regretted it almost immediately — and it was only of the back of his head.

"I felt like I had broken some kind of a seal in inviting people into my life," she told the outlet. "And even though I felt as though I had done it in as protective a way as I could, even though it was a moment I was incredibly proud of, I don’t know that I’ll ever do it again."

Nothing wrong with that at all. If she does end up deciding to share pics of her kids with the world one day, though, her fans will no doubt embrace them both with open arms. Congrats to her and Shulman on baby number two!