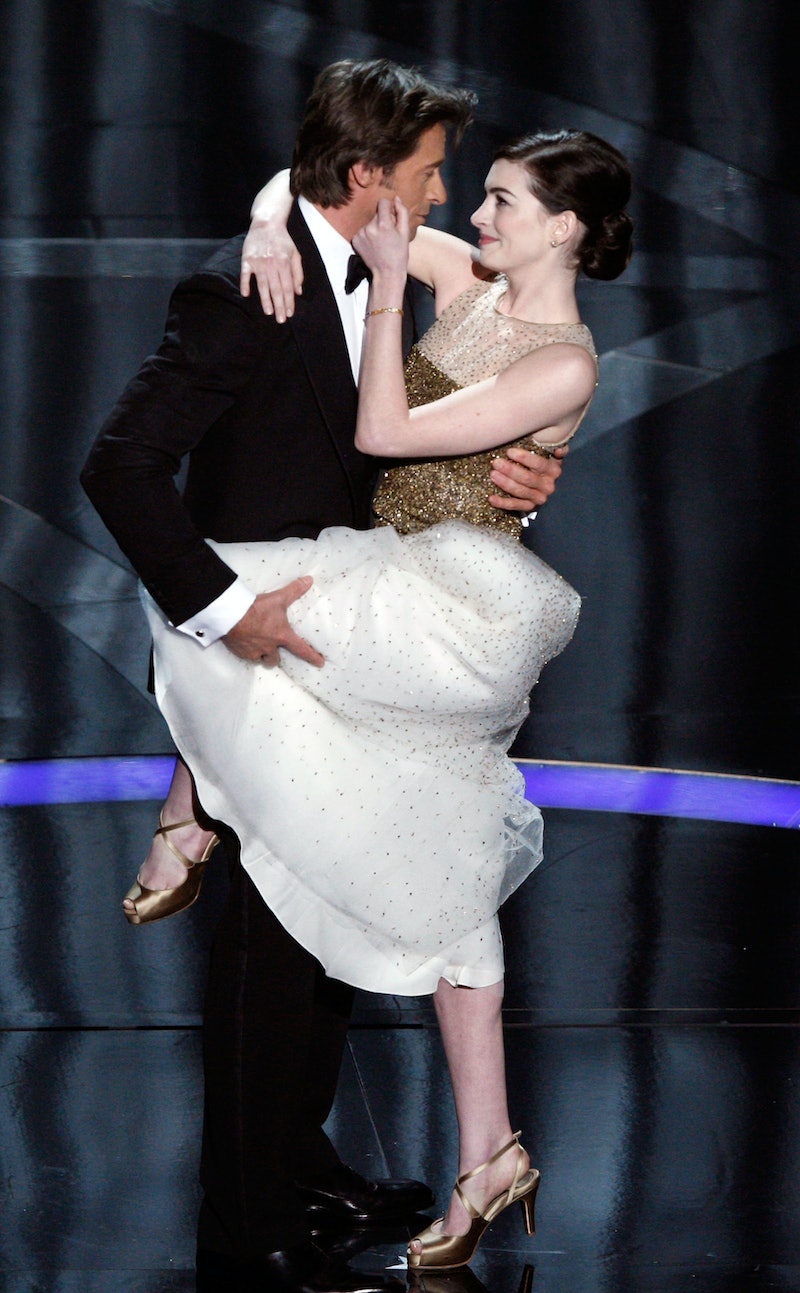 What happens when two former Oscar hosts sit down for a chat? They compare and contrast their gigs, of course. In Variety's "Actors on Actors" interview series, Anne Hathaway compared her Oscars host debut to Hugh Jackman's — and jokingly blamed the Bad Education star for convincing her it would be a fun and easy job. While Jackman's time as the show's emcee is looked back on fondly by viewers and Hollywood insiders alike, Hathaway and James Franco's ceremony in 2011 is widely regarded as the worst Oscars ever.

To be fair to Hathaway, she approached the gig with enthusiasm and was completely left hanging by her low energy co-host, Franco. Still, the Modern Love actor couldn't resist poking fun at herself during her chat with Jackman. "Hugh, there's something we've never talked about, and I think we need to clear the air," she said. "You set me up badly when you asked me to appear at the Oscars that you hosted, because you made it seem easy, and it's really, really not."

Hathaway and Jackman met at the 2009 Oscars when the Australian actor was the host and Hathaway was a presenter, per Variety. She also appeared in Jackman's musical opening monologue, which paved the way for her turn as a host a few years later. Now, a decade later, Hathaway told Jackman that his "chill" attitude during rehearsals and ability to have fun with the job made her want to emulate his performance. Sadly, her own hosting experience left a lot to be desired.

"You know how sometimes your optimism tips into delusion and you're just like, 'If I'm just really, really nice to everybody, everything's going to work out,'" she said, looking back on her pre-show confidence, adding, "It did not work in that case, but I’m so happy that 50% of the people on this conversation did a really good job hosting the Oscars."

Looking back, Hathaway did her best to carry the show by adding energy to a lifeless ceremony, even though she still seems to feel bad about the end result. After the disastrous 2011 Oscars, Hathaway even stepped out of the Hollywood spotlight for a while. Thankfully, she's back now, and she seems to be far more comfortable talking about that night.

In February of 2019, she even shared a throwback photo on Instagram of her time as host with Franco as a gentle reminder to the Academy that the worst Oscars had already happened. "No matter what happens with today’s show, just remember, it’s already been worse. Happy Oscars!" she captioned the photo.

Her post came shortly after she opened up to People about how all of her hosting fears came true. And the worst part is her first instinct was to decline the gig, but Franco convinced her to join him as the evening's co-host. "When all the dust settled, I was just like, ‘You gotta be kidding me. Your first instinct is usually the right one,'" she explained. "And all the reasons why I turned it down came true. All of them."

Despite her worst fears being realized, Hathaway and her career survived the 2011 Oscars. And the fact that she can joke about at now only proves that she's a total star.