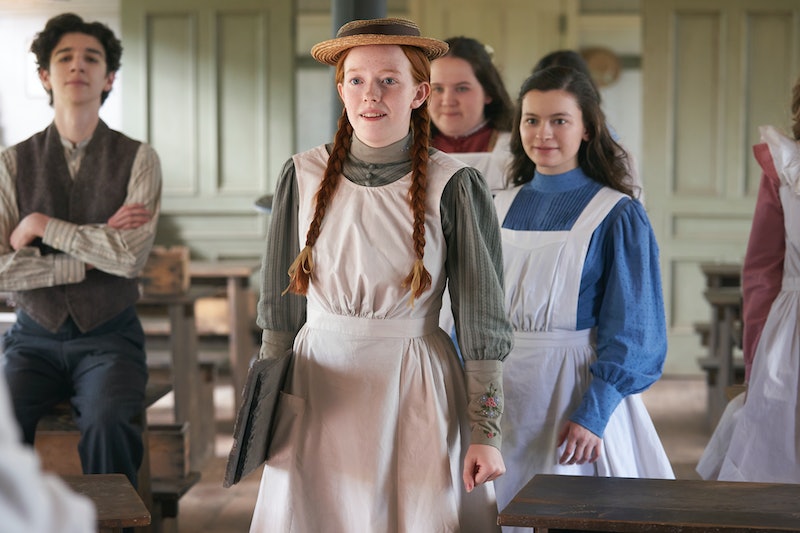 It's the end of the road for Anne with an E, but that hasn't stopped fans from trying to save it. In November, CBC and Netflix canceled the TV adaptation of Lucy Maud Montgomery's novel Anne of Green Gables, which told the story of Anne Shirley in a bold and modern new way. Though the Anne with an E cancelation sounds pretty final, the fan campaigning continues, with many now hoping that Disney+ or another streaming platform will scoop it up.

No official reason was given for the cancelation, but CBC/Netflix put out a joint statement in November thanking producers Moira Walley-Beckett and Miranda de Pencier for their work, saying that they hope the third and final season "brings a satisfying conclusion to Anne's journey."

The #RenewAnnewithanE hashtag began shortly after on Twitter, and quickly began trending with over one million tweets. ("I don't have the words," Anne's actor Amybeth McNulty tweeted out in response to the overflow of support.) Fans also launched a Change.org petition, a Facebook ad, and are now talking about setting up a billboard in Toronto. (Yes, really.) The hashtag itself has been going strong since November, and you can click on literally any tweet from the official Netflix Twitter account and see a message demanding Anne with an E's renewal underneath.

Anne with an E might possibly have the most passionate fandom out there, but this campaign is likely all for naught, according to the producers. "We heard your voices loud and clear (as did CBC and Netflix) from all around the world and we are so grateful for the generous outpouring of passionate enthusiasm for our show," Pencier wrote on Instagram on Dec. 6. "There is just no way to revive Anne with an E anywhere at this point. It will not happen."

Added Walley-Beckett in her own post: "Please know that we fought, too. We tried to change their minds. We tried to find a new home. We tried for a finale movie... We tried our best. But it's impossible to argue with words like Economics, Algorithms, Demographics ... and we didn't find a taker anywhere else." (Most recently, fans have been talking to Disney+ reps and have gotten feedback that Disney is considering picking up Anne with an E, but nothing has been officially confirmed by the company — and it's not clear if Netflix would even allow the jump.)

The general public has never really been privy to Netflix's strategy around cancelations, but Nellie Andreeva at Deadline speculated that it has a lot to do with strict clauses. "I hear there is a standard clause in the deals for Netflix series from outside studios that prevents the shows from airing elsewhere for a significant period of time, said to be two to three years, making a continuation on another network/platform virtually impossible," wrote Andreeva.

An industry insider told Andreeva that at the core of Netflix's business is "churn," and that the goal is always to get more people to sign up, which means consistently offering a ton of new shows rather than a few longer, continuing ones. The only series that get longer runs are the ones that clearly hit more mainstream demographics, like the nostalgic Stranger Things or Fuller House.

It's often the women-led and directed projects, like Anne with an E, that unfortunately suffer the most under this model, as many well-produced and thoughtful shows are overlooked by a wider demographic (read: men) simply because they speak to a specific female experience. (Comparably, the film Little Women is also reportedly being snubbed by male critics and viewers.) Anne with an E joins other canceled shows like Tuca & Bertie, Trinkets, The OA, and One Day at a Time — all fantastic shows by and about women.

Ultimately, it's understandable why fans of Anne with an E are so passionate about the show: though it was surprisingly dark and gritty in its first season, it began to really find its legs in Season 2 by introducing several new characters and modern plot lines that still beg for more exploration. (Recently, the film Little Women was criticized for not modernizing the tale with a more diverse cast, and the answer to that is that Anne with an E already has what viewers are looking for.)

By Season 2, Anne with an E actually addresses the societal and technological changes of the late 19th century by introducing feminist topics, two main black characters, and issues surrounding LGBTQ+ identity, and Season 3 appears to introduce a indigenous Canadian girl. Walley-Beckett expands far past the borders of Montgomery's creation to interrogate how homophobia, sexism, colonialism, and racism would realistically touch the little town of Avonlea. Though sometimes the storytelling veers into white savior territory with Anne and Gilbert — who never display a shred of prejudice for anyone — the effort to tell a more grounded, historical tale while still keeping to the optimistic spirit of the original is sincere.

In the end, Walley-Beckett's changes make it a richer and more expansive show that further drives home the need to love and accept those who are different than us. It's too bad Netflix didn't see that as worth renewing.

More like this
The ‘Love, Victor’ Showrunner Gave Fans Hope For A Possible Spinoff
By Brad Witter
Legacies Showrunner Said There Is Still Hope For More Vampire Diaries
By Gretchen Smail
'Stranger Things' Fans Are Begging For Steve To Live For The Funniest Reasons
By Grace Wehniainen
'Stranger Things' Season 4 Volume 2 Trailer Teases New Episodes Coming July 1
By Grace Wehniainen and Gabrielle Bondi
Get Even More From Bustle — Sign Up For The Newsletter