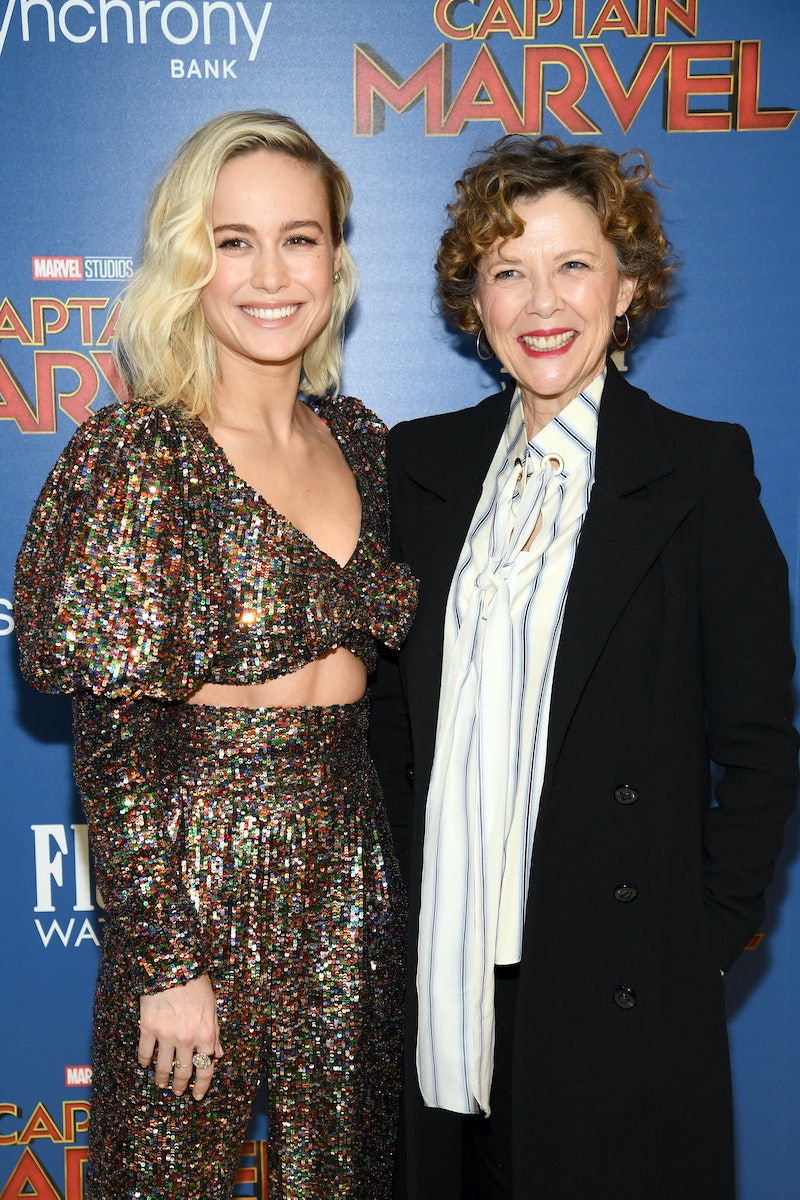 Women supporting women is a major theme in Captain Marvel, which is why it might surprise some fans to know that Annette Bening's Marvel role was originally written for a man. Spoilers ahead for Captain Marvel. Yes, Marvel's first female superhero's mentor was almost just another guy instead of Bening's Dr. Wendy Lawson, a scientist who is actually a Kree alien name Mar-Vell.

To be fair to the writers of the film, Mar-Vell is a male character in the original comics comics, so they were just following the source material. Or, they were until they made the big gender change to the character — a change that even the Captain Marvel screenwriters admit came to them a little late in the making of the film. Better late than never, right?d

In a recent interview with Entertainment Weekly, Captain Marvel co-directors and co-writers, Anna Boden and Ryan Fleck, who penned the script with Geneva Robertson-Dworet, revealed they had originally intended for Mar-Vell to be a man. In fact, they were looking for a male actor to play the part when they had a change of heart.

It was Boden who felt that giving Captain Marvel a female mentor just made more sense, even if it was a departure from the original comic. Mar-Vell's first comic book appearance came in 1967 and ever since, he's played a big part of Carol Danvers' origin story. According to EW, though, Danvers was originally cast as Mar-Vell's love interest before gaining her powers after a Kree explosion in the comics. While the new film luckily threw out that whole love interest storyline, it does have her gain her powers through an explosion in proximity to Mar-Vell.

Boden told EW that she "dreamt up" the idea to combine the roles of Mar-Vell and the Supreme Intelligence, the white-haired green-eyed Nirvana-loving version of Bening that Captain Marvel sees in the film. The Supreme Intelligence represents the person the viewer, in this case Captain Marvel, admires most. Bening felt like a good choice to play both roles since she's an actor Boden and Fleck admire, too.

“She’s got the great mentor quality that we were looking for in that character," Fleck told EW of Bening, "but she can also be really tough, and that was really necessary for both aspects. She can be regal, which was perfect for the Supreme Intelligence, and she can also just be casual and cool and laid back, which was necessary for Lawson.”

In Boden and Fleck's opinion, it was also necessary that Captain Marvel had a strong group of women surrounding her. Not just in the now-female Mar-Vell, but also in her bestie Maria Rambeau (Lashana Lynch) and Maria's young daughter Monica (Akira Akbar), who was the first female Captain Marvel in the comics, according to io9. (And yes, The Hollywood Reporter hinted that Monica might return in Endgame as a new Avenger, seeing as how there is a 24-year time jump between Captain Marvel and the next Avengers film.)

Most importantly, it's an intergenerational and diverse group of women that provide not only Carol Danvers, but other young women, new heroes to look up to. As Boden told io9 on Monday (March 11), part of Captain Marvel's greatness comes from these bonds she forms with others.

"We have this character who is so physically powerful and so strong. But that’s not, that is not really what defines her," Boden said. "What makes her who she is is this journey of self-discovery towards her humanity and embracing all of the messiness of that—the emotion and the compassion and the vulnerability. That’s what ends up giving her her true power."

Here's to seeing Carol Danvers, with help from her girl squad, showing off her true power in Avengers 4.