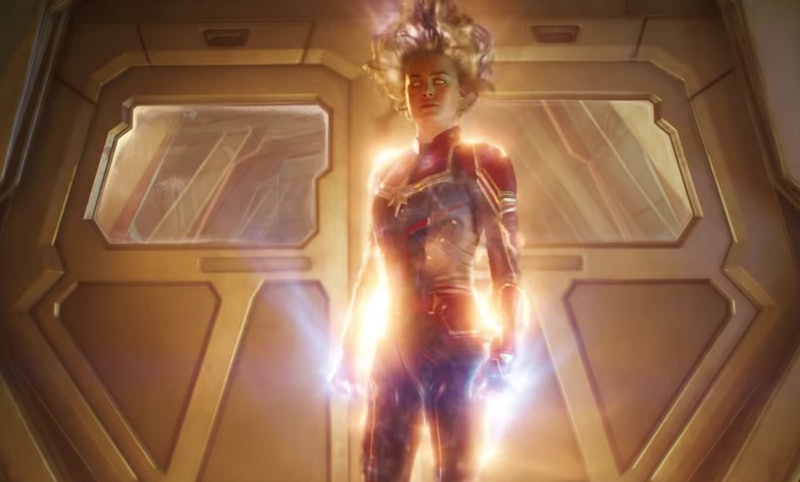 When it hits theaters on Mar. 8, Captain Marvel will finally introduce Carol Danvers (Brie Larson) into the Marvel Cinematic Universe, as well as re-introduce a few familiar characters, such as Nick Fury (Samuel L. Jackson) and Phil Coulson (Clark Gregg). But Carol isn't the only Captain Marvel the comics have seen. In the early days of the superhero, a Kree character named Mar-Vell, with the alias Dr. Walter Lawson, becomes known as Captain Marvel.

It was rumored that Jude Law was actually playing Mar-Vell in the movie, and the IMDB page for the film once credited him as such. But another theory emerged speculating that Law is actually playing a different Kree commander called Yon-Rogg. Screen Rant noted that a movie tie-in prequel novel that came out in mid-February confirms that casting, and the IMDB credit has changed as well. For a long time, Law's casting was kept suspiciously vague.

Regardless of who plays Mar-Vell or his alien rival in the new Captain Marvel movie, Walter Lawson will likely have a big part in the '90s-set movie. At the beginning of the trailer for Captain Marvel, you hear Nick Fury confirming of Carol, "You're a Kree? A race of noble warriors?" She corrects him, calling her people "heroes." In the comics, the whole reason why Carol Danvers became half-Kree in the first place was because, when she was working in the Air Force, her DNA mixed with Mar-Vell's in an explosion.

While Carol Danvers first appeared in a 1968 Marvel comic, Marvel Super-Heroes Vol. 1 #13, Mar-Vell, made his debut in the same comic series' twelfth issue in Dec. 1967. In that first appearance, Mar-Vell, who was then also called Captain Marvel — yes it's confusing — lands on earth with his Kree crew. Yon-Rogg, Mar-Vell's rival, takes command of the Kree crew and leaves Mar-Vell on earth while the Kree return to space.

The first Marvel comics series that featured Captain Marvel — the full Kree one, Mar-Vell — ran from 1967 through 1979. After Yon-Rogg deserts Mar-Vell on earth, the latter finds the body of Dr. Walter Lawson. Walter had been killed by a fire beam that Yon-Rogg had aimed at Mar-Vell on the space ship, per Marvel's Wiki, and Mar-Vell takes on Walter's identity. Since the scientist worked at the Cape, Mar-Vell begins going there to learn about the human race, and the Cape happens to be where Carol Danvers works as a security chief.

Carol and Mar-Vell become friends, and the latter often appears as a side character in the first Captain Marvel comics in the late '60s. In the comic Captain Marvel #18, from November 1969, a battle between Yon-Rogg and Mar-Vell results in Carol Danvers getting caught in an explosion that kills Yon-Rogg and transfers super powers to Carol. After that battle, Carol becomes the superhero known as Ms. Marvel in the comics. And only in 2012 does she adopt the title Captain Marvel, after Mar-Vell dies, per Polygon.

Even though Mar-Vell, or Walter Lawson, dies in the 1982 Marvel Graphic Novel line, Death of Captain Marvel, the character continues making appearances for decades after in various other comics that tell stories of the Kree superhero's life, which includes fighting in the Kree-Skrull War, which figures into the Captain Marvel movie.

Major spoilers ahead for Captain Marvel:

Though the Jude Law casting was debunked, Mar-Vell still figures prominently into Captain Marvel. In the movie's universe, she's actually a female Kree, played by Annette Bening. Kree see the Supreme Intelligence as the person they admire most, and though it takes time for her to remember who she is, Carol sees it as Dr. Wendy Lawson, her former commander and undercover Kree, who was developing a light speed engine on Earth. Gender-swapping such a vital character — and mentor to Carol — is a smart, meaningful change to the comics history.