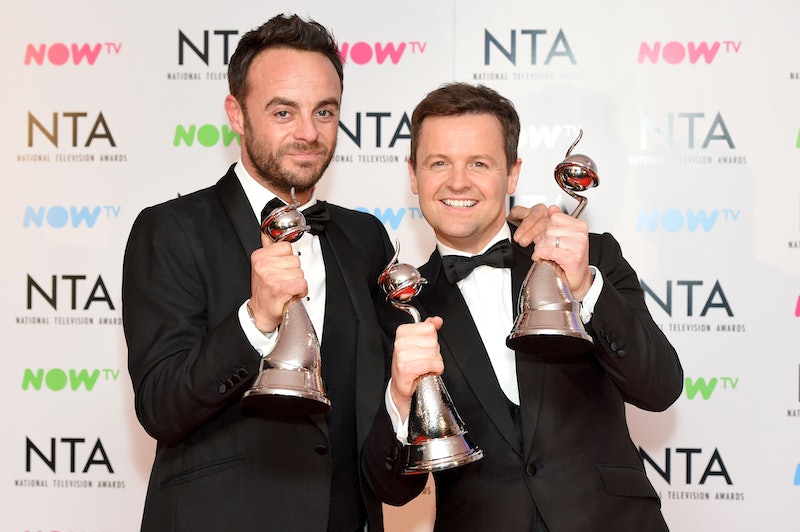 Since way back in 2001, Geordie icons Ant and Dec's National Television Awards streak has remained intact, with the duo maintaining a seemingly unbreakable grip on the award for best TV presenter. This year, however, there's some doubt as to whether the pair will secure another trophy, as Ant was offscreen for most of 2018 in order to focus on his recovery from addiction. But speaking to the Sun, Ant said that Dec deserves the award — because, among other things, he's such a good friend. Is that a tiny tear I see forming in your eye?

"If we do win — and I hope people still vote — then Dec deserves it," Ant told the paper. "He’s worked his socks off this year." He continued, "It’s an accolade to how hard he’s worked in tough circumstances. How good a friend he’s been to me. How much of a professional he is." Worry not, McPartlin and Donnelly diehards! Looks like their decades-long friendship remains very much intact.

Ant won't be too concerned if the award goes elsewhere, however. "It’s not going to be the end of the world if we don’t win. I know more than anyone that life’s more important than an award," he said. "But if we do win, then Dec will have to take most of it and I’ll take a tiny bit for my few shows last year."

The pair's long-awaited onscreen reunion came on Friday, January 18, as filming started on the 2019 series of Britain's Got Talent. En route to set and looking positively delighted, Ant and Dec heralded the occasion by tweeting a selfie, appropriately captioned, "The boys are back in town!" And if there's any doubt as to public feeling regarding Ant's return, the approximately 180,000 likes the tweet's received at time of publication should clear things up.

As the Standard reports, Dec initially took to the stage alone. "We've got a bunch of acts backstage who are eager to get out here and perform for you. The judges are back, the buzzers are back and someone else is back," he told the audience, captured in videos shared on social media. "My co-host for this series, would you please welcome Mr Ant McPartlin!"

Ant appeared onstage to rapturous applause, telling the crowd, "Oh god, I'm really, really emotional now. I've missed you all. As for you [Dec], I’ve missed you! Thank you for a very lovely welcome." He continued, "What a great show to come back to, I’m thrilled. I’m over the moon. Shall we move on before I cry?"

Even judge Simon Cowell had some sweet words to share, saying, "Ant, welcome back. We missed you; it wasn’t the same. I mean even though Dec was brilliant, it still wasn’t the same." He added, "So on behalf of all of us, welcome back, we’re family. [Turns to audience] You are family!"

Let's go ahead and assume this series of Britain's Got Talent will be an extra emotional one, shall we?