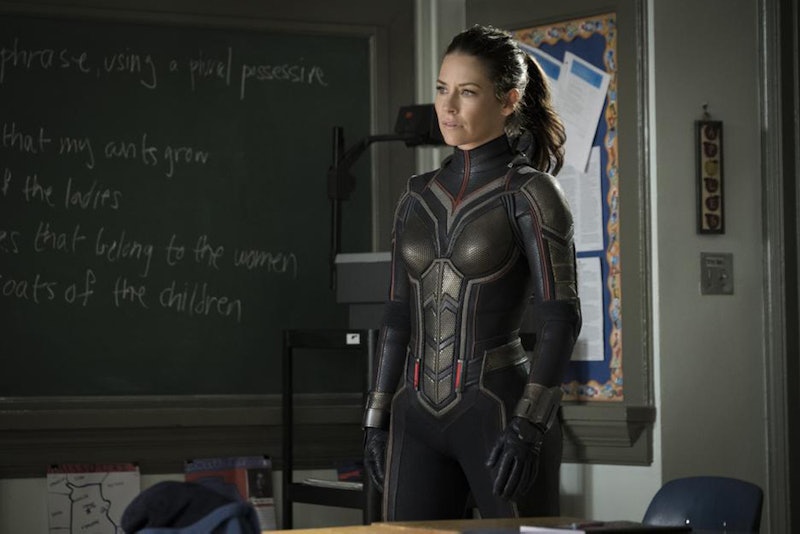 Every superhero needs an origin story, right? That's certainly the narrative we've been given time and time again from Marvel and DC. Yet while origin stories aren't necessarily bad — in fact, they're often necessary steps on a hero's journey — they can get tiresome, and irksome when you just want to get to the action. Just take Hope van Dyne (Evangeline Lilly) of Ant-Man; fans watched her struggle against the patriarchy all movie long only to finally get her Wasp costume in the end credits scene, and so waiting through another movie for her realize her true potential would be frustrating beyond all reason. Thankfully, though, July 6's Ant-Man and the Wasp is not an origin story for Hope as Wasp.

"It’s two years after you last saw Hope van Dyne, a lot has happened that you don’t get to see," Lilly tells reporters on the Ant-Man and the Wasp set in Atlanta last summer. "Instead of seeing her evolved into a superhero, the leap we take with the audience is we all believed by the end of Ant-Man she’s ready to be a superhero, that there doesn't need to necessarily be that origin journey of why and how and learning the skills it requires to a superhero."

"Instead," Lilly continues, "we make that leap of faith of saying you know she’s kickass. So let her just do that and be that, and then let’s explore some of the other emotional throughlines of her life and her story."

Hope was indeed ready to be a superhero at the very start of the first Ant-Man film. She was fully trained, understood her father Hank Pym's (Michael Douglas) technology, and most of all was dedicated to the cause in a way that Scott Lang (Paul Rudd) wasn't. As such, watching this fierce, capable woman getting held back by her father in favor of Scott just because he was a man and unrelated to Hank just plain sucked. Hope's frustration with the situation was apparent throughout the first movie to the point where her giddy relief and utter joy upon being gifted the Wasp suit at the end was palpable.

And in Ant-Man and the Wasp, which picks up after the events of Captain America: Civil War (but not Avengers: Infinity War, so don't get confused), Hope gets to show off her skills. Because there aren't any speed bumps or learning curves for Hope, when she and Scott reunite in Ant-Man and the Wasp, it's truly a superhero team-up — not a superhero operating with a new sidekick.

"We have this new hero that we’ve already learned about in the first one and now we get to play off of each other and you see a partnership developed, which is great," Rudd tells reporters on set.

According to director Peyton Reed, that was the goal from the start. "We decided this movie’s going to be Ant-Man and the Wasp, it’s not Ant-Man with the Wasp," he explains. "It is important to tell those stories separately and invest in each of the characters’ journey and arc in the movie. One of the big things about this is what’s going on with Hope and the fact that she has the mission that is happening entirely separate of Scott. It's vital and it’s not her dad’s mission. It’s her mission."

That mission is attempting to locate and rescue her long-lost mother Janet van Dyne (Michelle Pfeiffer), who Hank always believed was trapped forever in the Quantum Realm after shrinking down too small and not being able to return to normal size. When Scott was able to return from the Quantum Realm in the first movie, that gave Hank and Hope renewed hope that Janet could still be saved 30 years after she disappeared.

"Hank and Hope are working together, but it’s really Hope leading the charge and that was an important thing when we started talking about what was going on, the what and why of this mission, and that there may be certain points in this movie where she sees Scott as a liability," Reed explains. "There are aspects of this movie that are like a two-hander action movie and there’s aspects of it that are like a two-hander romantic comedy and it’s important to get that balance and have her be a fully fleshed out character with motivations."

Of course, now that Hope is a "fully fledged hero in her own right," according to Reed, she has a need for a mentor or role model. "The one person that she would really turn to is not there," Reed says, referring to Hope's mother Janet. "Hank can do something, Scott may be a template of maybe what not to do all the time, but that person who she would ideally want there is not there and that was a really important aspect of the movie."

In that sense and more, Hope and Scott are clearly nothing alike. "Hope van Dyne and Scott Lang are two birds of a very, very different feather," Lilly says with a laugh. "Scott is just incredibly, loveably easy-going and relaxed about things. Even when it seems like things are as dire as they can be, you have this sense that he’s kind of OK inside. Um, Hope is generally not OK inside."

But on the flip side, Rudd explains that Hope is a much more natural Wasp than Scott is as Ant-Man. "I feel like she’s born into it and made for it more than I am," the actor says. "She has the focus and the drive and I think the desire to do it maybe more than me, at least at first."

Finally getting to become the Wasp, something that Hope has been waiting and working for all her life, gives the character a satisfaction that Lilly says she couldn't wait to play. "Essentially an affirmation from her father has come, and it came in the form of this mantle, it came in the form of this suit," the actor explains. "So now that she’s wearing it and she’s exercising those muscles that she has wanted to exercise all her life, she’s in a really different place emotionally when we start the film."

Portraying this newfound happiness in Hope was a thrill for Lilly, and she thinks that audiences will be able to notice the difference in the character instantly. "To the extent that sometimes I get nervous that the world will watch and go, 'Is that even Hope van Dyne?'" Lilly says with a laugh. "But I think that that’s wonderful to show that people do evolve and change and that something as profound as your relationship with your father can have a effect on and a reverberation in every aspect of your life."

And in order to find and save her mother, Hope is going to need an awesome suit. Wasp fans will be psyched to know that Hope's suit is actually an "upgrade" from Scott's, according to Lilly. "He was wearing Hank’s original suit from the 1960s," she says, smiling "What we were able to do with technology and my suit, I have blasters on my wrists. I have my wings."

And, unlike Scott, Hope doesn't need to press any buttons to activate her suit, either. "Essentially there is like a reaction system to what I am thinking," Lilly says. "I just think it and it happens, similar to Iron Man because you never see him press buttons or do anything, things just happen."

Sounds pretty state-of-the-art, right? Unfortunately, the first time the extremely excited Lilly went to try on the Wasp suit, it didn't fit. "It was very anti-climactic," the actor recalls. "It was like, 'Ugh, this doesn’t work. Um, why is my bum flat? I have a really good bum, guys. Come on. Work with me here!' So it was four months of in-and-out of suits and fitting and tweaking and tapering at the right spots and letting out at the right spots and making everything fit like a glove to my body which is very, very difficult."

After the costume team brought on a seamstress who worked with dancers before, though, finally the Wasp suit fit. "Once it was perfect, once the suit came to a place where I put it on and you could feel everyone in the room go, 'Ohh, there she is,' that was f**king cool," Lilly says. "And then it was like they couldn't get it off of me."

That sounds exactly like something Hope would say. After all these years of waiting, both Hope and Lilly deserve their chance to shine as Wasp.