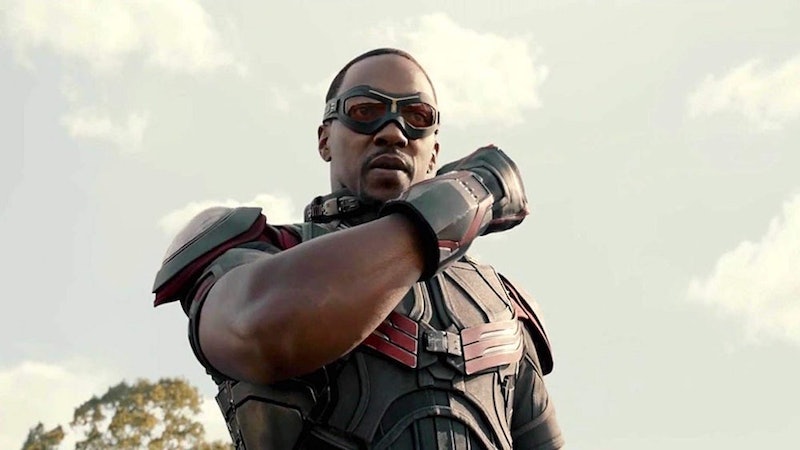 Spoilers for Avengers: Endgame ahead. For those who got a little misty-eyed watching old man Captain America pass the shield to Falcon in the final moments of Avengers: Endgame, don't worry you're not alone. The moment Falcon officially became Captain America was an emotional one for Anthony Mackie, too. Mostly, because the man who's played Sam Wilson for six films has been waiting 15 years for that to happen.

In a new interview with Men's Health, the actor discussed the moment he found out that Falcon would inherit Cap's shield. “They were like, ‘Are you ready for tomorrow? You’re getting your shield,’” he said. “I’m like, ‘Get the f*ck out of here.’ ”

Mackie told the magazine, which crowns him "your new Captain America," that it was the OG Cap, Chris Evans who told him about his promotion. While the Russo brothers knew that Mackie would become the new Captain America three years before Endgame, they wanted to keep things hush-hush. “We don’t want anything to leak, so we keep everything a secret from the actors, especially Mackie,” Russo told the magazine.

Instead, it was Mackie's friend Evans, who has long said he was leaving Marvel after Endgame, who told him that he was the new Captain America. After a day of watching football at Evans' house during the filming of Endgame, the actor shared the script with Mackie, who hadn't been given the full screenplay yet. “Chris gets the look of a six-year-old kid on his face, runs away, and comes back with the script,” Mackie said. “I’m reading it, and it dawns on me what’s happening.”

But, it was actually holding Captain America's shield in his hands that made it official for Mackie. He told Men's Health having Evans pass him the shield “was like winning the Oscar. I was nervous. I was excited. I was stumbling over words.” As for what the vibranium shield felt like in his hands. “It’s unbalanced and it’s heavy," Mackie said. Good to know.

The iconic shield is certainly an upgrade for Mackie who's been Cap's right-hand man since Captain America: The Winter Soldier, a role he got after lobbying Marvel execs. “My line was ‘Yo, I’m the black dude from The Hurt Locker," he told the magazine. "I would love to work with you guys.’”

Apparently, that worked. Finally getting leading superhero status, though, is a far cry from his early experiences in the MCU when fans would often mistake him for Don Cheadle, who plays Iron Man's buddy War Machine. “I’d be like, ‘That’s the other black guy,’ ” Mackie explained with a laugh. “Now, they know exactly who I am.”

While Sam Wilson has been Captain America in the comics since 2014, it's unclear when fans will get to see Mackie in the Cap suit. Next, he'll star in Marvel's Disney+ show Falcon & Winter Soldier as, well, he's not so sure yet. “I’m guessing I’m Fal-Cap, or . . . I don’t know,” he told Men's Health. “I haven’t even seen a script.” So, for now, fans will have to wait to see their new Captain America in action. Hopefully, not as long as it took Mackie to earn the part.