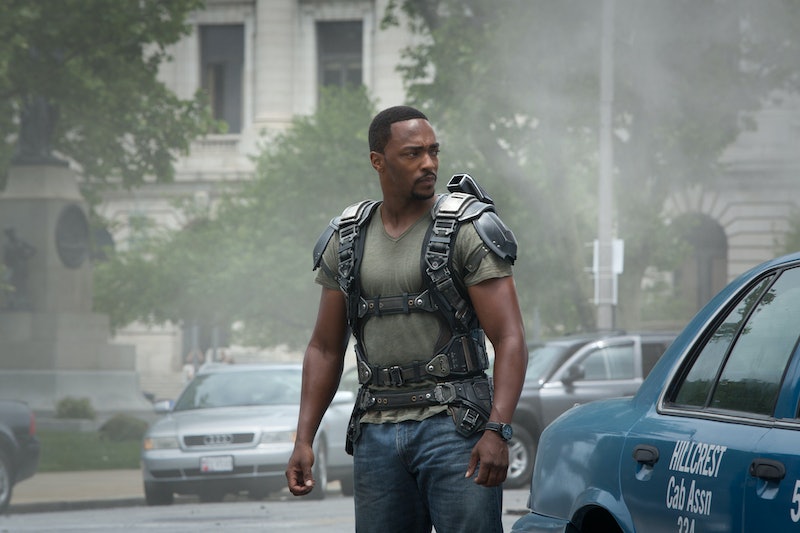 Spoilers ahead for Avengers: Endgame. The end of Avengers: Endgame brought a lot of changes. Tony Stark was killed in the final battle against Thanos, and Steve Rogers traveled back to the past to live a long life with his beloved Peggy Carter. When Steve meets up with his pals Bucky Barnes and Sam Wilson again, it's 2023 and he's super old. He apparently lived his life to the fullest, in secret, and hiding from the adventures of his other self throughout the past decade or so. And his final act upon reuniting with Bucky and Sam is to pass on his shield. Sam the new Captain America in the MCU, which may have come as a surprise to some fans.

The final moments of Endgame are touching for a number of reasons. When we first see older Steve, it's clear from the ring on his finger that he had been happy with a companion. It's interesting though, that only Sam approaches him as he's sitting on that bench by the lake, as if Bucky knows that Steve and Sam need a moment together. Bucky and Steve have a long and deep history that stretches over decades and several MCU movies that hinge on their friendship. Steve went to great lengths to rescue his friend, so perhaps their story is complete. But Sam and Steve still need something to finalize that loyalty to one another. When Steve hands his Vibranium Captain America shield over to Sam, he asks. "How does it feel?" Sam says, "Like it's someone else's." But Steve replies, "It's not," solidifying that it's Sam who now carries the Captain America name.

In our world, meanwhile, Steve choosing to pass the shield onto Sam instead of Bucky might have more to do with the current drive for more diversity on screen, the Marvel NOW! initiative, and the reality of what's behind the rising threats in our own world. Back in October of 2018, actor Frank Grillo, who plays Brock Rumlow a.k.a. Crossbones in Captain America: The Winter Soldier, Captain America: Civil War, and Endgame, said on Larry King Now, "There've been rumors that [the next] Captain America could be African-American. It could be a woman. You know? So they're looking."

On the print side, Marvel Comics' Marvel NOW! publishing initiative looks to challenge the status quo as far as representation in comics. In the years since its launch, Polygon reports, there have been a number of non-white-male superheroes emerge. We've seen Jane Foster become Thor, Muslim Kamala Khan become Ms. Marvel, and now San Wilson become Captain America, among other character changes.

Sam's emergence as Captain America also reflects a more modern day take on what Captain America means and is. While Steve and Bucky grew into their roles as soldiers by fighting Nazis and HYDRA in the 1940s, Sam is more tuned into the present. As Marvel Comics editor Tom Brevoort said, according to The Verge, "While Sam shares many of Steve’s beliefs in a general sense, he’s also a very different person with a very different background. He didn’t grow up in the 1930s, he's a modern-day man in touch with the problems of the 21st Century." For The Wrap, Trey Williams and Ross A. Lincoln write, "Sam also stakes out an openly-activist stance as Cap" in the comics, and challenges himself to be more than just a symbol, but an agent of change.

This is also reflected in the fact that one of Sam's first challenges in his comic story line was fighting the Sons of the Serpent, a white supremacist group that opposes racial integration and immigration of any kind. Is doesn't take a genius to connect those issues to those in our current world, such as the rise and normalization of white supremacy and the refugee crisis all over the world, making Sam the right man for the job.

But all we know for now is that Disney+, the House of Mouse's new streaming service, is going to bring us a new series called Falcon and the Winter Soldier, which will star Anthony Mackie and Sebastian Stan in their MCU roles. It's unclear how Steve's passing of the Captain America torch will play into that series, and if Sam will still go by the name Falcon. One thing that's probable is the 21st century Sam and WWII-era Bucky might have some humorous interactions regarding their different upbringings and eras. But what's certain is that Captain America, just like America herself, is changing, and that Sam Wilson is a meaningful choice to take the MCU into the future.