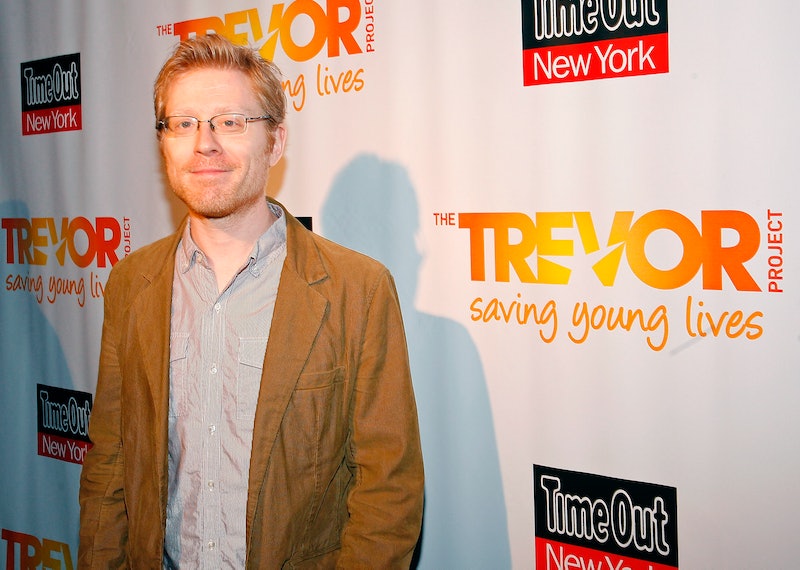 The downfall of Hollywood hotshot Harvey Weinstein inspired women across the globe to speak out about alleged sexual assault and harassment they've faced, and now it's inspired men in Hollywood to come forward, too. In a BuzzFeed News report published Monday, actor Anthony Rapp accused Kevin Spacey of making an alleged unwanted sexual advance when Rapp was a young teenager. Spacey later claimed he doesn't remember the alleged incident and said if it did occur, he owes Rapp "the sincerest apology." However, Rapp's allegations serve as an opportune reminder that unwanted sexual attention and sexual assault affect men as well as women.

Rapp, now 46, alleged Spacey, placed him on a bed and climbed on top of him after a party. "He picked me up like a groom picks up the bride over the threshold," Rapp told BuzzFeed News. "But I don't, like, squirm away initially, because I'm like, 'What's going on?' And then he lays down on top of me."

Rapp was 14 at the time and claimed he knew Spacey, then 26, "was trying to get with me sexually," but the teen was able to "squirm" away.

Spacey issued an apology on Twitter, writing: "I am beyond horrified to hear his story. I honestly do not remember the encounter, it would have been over 30 years ago. But if I did behave as he describes, I owe him the sincerest apology for what would have been deeply inappropriate drunken behavior."

In a series of tweets, Rapp acknowledged that the onslaught of people coming forward about alleged abusers in recent weeks encouraged him to share his story. After dozens of women accused Weinstein (who denies all claims of sexual misconduct) and others accused well-known journalists, politicians, and executives of inappropriate behavior, the fact that boys and men can also be victims of harassment and assault shouldn't be ignored.

About one in 10 rape victims are male, and roughly one in six men experience abusive sexual experiences before they're 18, an estimate the nonprofit 1in6 believes is conservative. "It's critical to remind male survivors that they are not alone, and that help is available for them too," a spokesperson for the Rape, Abuse & Incest National Network (RAINN) tells Bustle.

Of course, this doesn't negate from the fact that sexual assault and rape disproportionately affect women, as 90 percent of rape victims are female. But like any other subject, it's more complicated than simply a "women's issue" or a "men's issue."

Because sexual assault is typically seen as a women's problem, men who experience it face unique barriers in acknowledging the assault and subsequently trying to heal.

For boys and men, sexual abuse and sexual assault completely contradict how they're constantly told they should be. Boys and men aren't supposed to be dominated sexually, especially by other males, and they're never supposed to be victims, or overwhelmed by bad memories and feelings. All of that is 'unmanly,' they've learned — literally an existential threat.

Men are also socialized to have less awareness of their feelings, which can also make it challenging to come forward. "They not only fear telling anyone what happened, for fear that could destroy their masculinity in others' eyes," Dr. Hopper says, "but even when they do share what happened and seek help, they often lack the emotional capacities required to heal the trauma they've experienced, and therapy can take a lot longer."

The same gender biases that contribute to such high numbers of women experiencing sexual assault in their lifetime also sweep male victims under the rug. And if America has learned anything from the Weinstein saga, it's that giving survivors the space to come forward helps end the cycle of alleged abuse.

As Andy Connolly, acting chief executive of SurvivorsUK, puts it: "We want to make sure that as a society we actively try to remove as many of the barriers to speaking out as possible instead of, even unintentionally, reinforcing them."