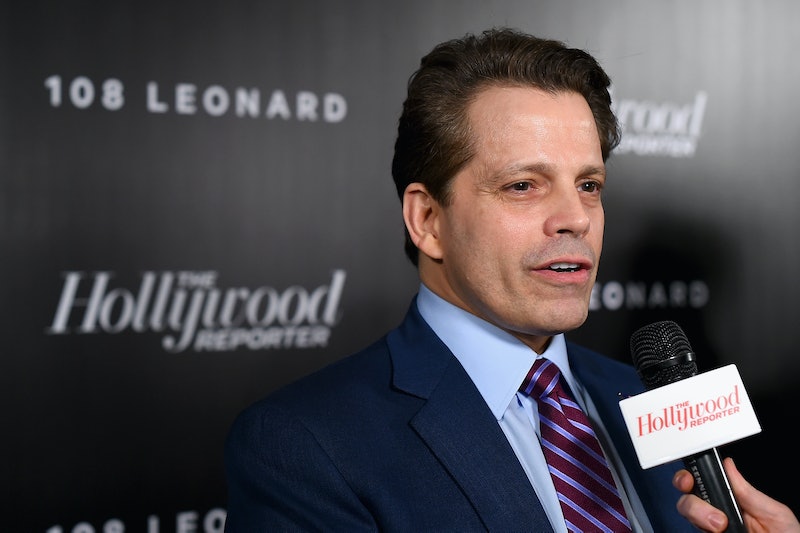 Following his whirlwind tenure as a White House staffer, Anthony Scaramucci recently entered a very different kind of house: the Celebrity Big Brother house. Last July, the entrepreneur infamously served 10 days as the Trump administration's director of communications. But over six months after the storied ousting, you might be wondering: um, what is Anthony Scaramucci's job now?

Whatever he's doing, it's apparently working well for him. According to Money Inc, Scaramucci has an estimated net worth of $200 million. (For comparison, the grand prize for winning an average, summer-long, celebrity-free season of Big Brother is a measly $500,000.) The outlet further reports that Scaramucci was rumored to be earning an annual salary of $179,700 during his brief White House stint, but he's also involved in a number of other ventures — chiefly, the investment firm he founded, SkyBridge Capital, which specializes in "funds of hedge funds products, custom separate account portfolios, hedge fund advisory services and a long-only mutual fund," the official website states. According to CNN, Scaramucci had resigned from Skybridge in January 2017, but announced his return to the firm last April, after its scheduled sale to Chinese conglomerate HNA Group fell through because federal regulators didn't sign off on the deal. He currently serves as a co-managing partner, per the SkyBridge website.

According to Money Inc., Scaramucci receives income from his ownership shares in the firm, and made a reported $12 million prior to leaving to serve at the White House. Throughout his career, he's also invested in a number of outside projects: he opened a high-end restaurant in Midtown Manhattan called the Hunt & Fish Club in 2015, and as Sports Illustrated reported in 2017, he owns a minor stake in the New York Mets.

Furthermore, Scaramucci has made frequent appearances on CNBC and Fox Business Network, as well as published several books. He most recently published 2018's The Blue Collar President: How Trump is Reinventing the Aspirational Working Class, which he summed up to the New York Post as "an entrepreneur writing about an entrepreneur who has now ascended into the presidency."

So, between his investment firm, robust financial portfolio, and detour into reality TV, Scaramucci is seemingly busier now than he was during his short time in the White House. And he may have even set a new record for himself: lasting in the Big Brother house for an even shorter amount of time than he did in the White House.

Scaramucci revealed in a recent Periscope that he is no longer in the Celebrity Big Brother house, but declined to say why he left. Was he evicted early? Did he leave of his own volition? Was his involvement merely a stunt and he never intended to stay for the entirety of the season? Scaramucci explained that he went on the show so that he could connect with blue-collar families, and admitted that while his time in the house was not long, it was a "tremendous amount of fun." With so much going on, it seems that Scaramucci simply had to get back to work.