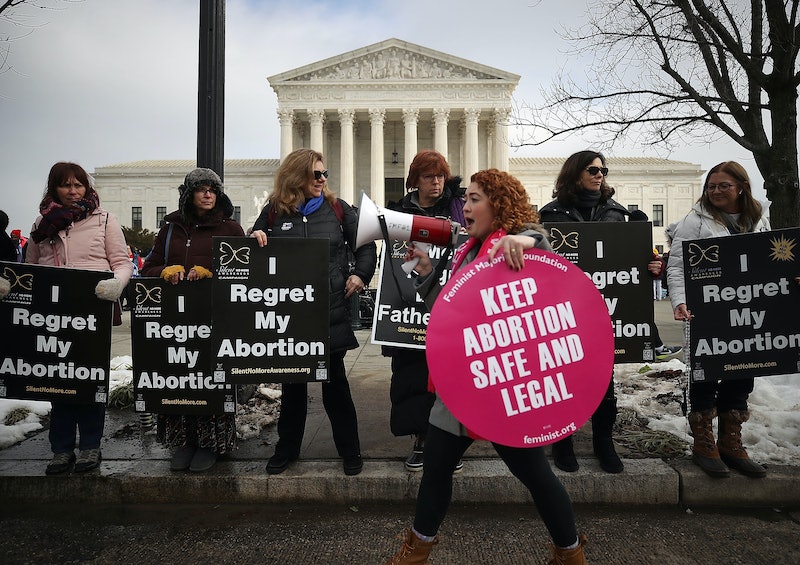 One of the world's most powerful tech companies is taking action to keep misleading anti-abortion ads offline. Google recently released details about an updated policy that'll take effect in June, and it aims to make the motive behind these types of ads more transparent.

On Tuesday, CBS News reported that under Google's health care and medicines policy released in May, advertisers that wish to run ads with keywords related to abortion will have to meet the tech giant's authenticity requirements. For starters, interested advertisers will need to fill out applications clearly declaring whether or not they provide abortion services. Upon submitting this application, Google will verify the advertiser's claim and provide certification.

Based on what the verification results are, the company will give an in-ad disclosure to viewers stating that this advertiser "provides abortions" or "does not provide abortions." As Adweek reporter Shoshana Wodinsky noted on Monday, Google's push for accurate abortion information online could "cut out potentially hundreds of misleading pro-life crisis center ads."

Furthermore, Google stated in its policy post that "concealing or misstating information about the business, product, or service you’re promoting is not allowed and may subject your account to suspension."

News about Google’s updated policy could be a source of relief for those who worry about the misinformation spread by "crisis pregnancy centers." According to CBS News, such centers provide reproductive health care resources like ultrasounds, sonograms, and pregnancy tests, but they actively attempt to dissuade women from getting abortions.

It’s also worth noting that some of these groups don't openly state their opposition toward abortion but use descriptions that may mislead some women into believing they provide the service. In some cases, abortion clinics and crisis pregnancy centers are mistaken for the same thing. In a 2015 statement, however, NARAL President Ilyse Hogue essentially called them polar opposites. She said:

Crisis pregnancy centers offer the exact opposite of [abortion]. These institutions are driven by a desire to limit women's options and to do whatever it takes to keep all women from choosing abortion. They lie, they scare, they humiliate.

In the United States, this kind of systematic approach to online misinformation seems especially pertinent given the current political climate. With a conservative majority in the Supreme Court, NBC News reported that there's nationwide momentum to pass legislation that could ultimately challenge Roe v. Wade, the 1973 Supreme Court decision that declared getting an abortion was a woman's constitutional right.

According to the Planned Parenthood Federation of America and the reproductive health care research center, Guttmacher Institute, at least 41 states have proposed over 250 anti-abortion measures since 2019 started. States like Arkansas, Kentucky, Mississippi, Utah, Ohio, Georgia, and Alabama have all passed bills that severely restrict a woman's right to safe and legal reproductive health care.

With these states passing restrictive bills on abortion that outlaw getting the service as early as six weeks into a pregnancy — and in Alabama's case, a virtual ban on the procedure including no exceptions for rape and incest survivors — rooting out misinformation could become more and more essential.

More like this
Joe Lycett Just Took HIs David Beckham Qatar Protest To A Whole New Level
By Sophie McEvoy
Footballer Jake Daniels Shared His Thoughts On A World Cup Boycott
By Sam Ramsden
Iran Has Issued A Death Sentence Over Mahsa Amini Protests
By Catharina Cheung, Darshita Goyal and Maxine Harrison
Here’s How To Find Your Spotify Wrapped
By Emma Lord and Emma Carey
Get Even More From Bustle — Sign Up For The Newsletter