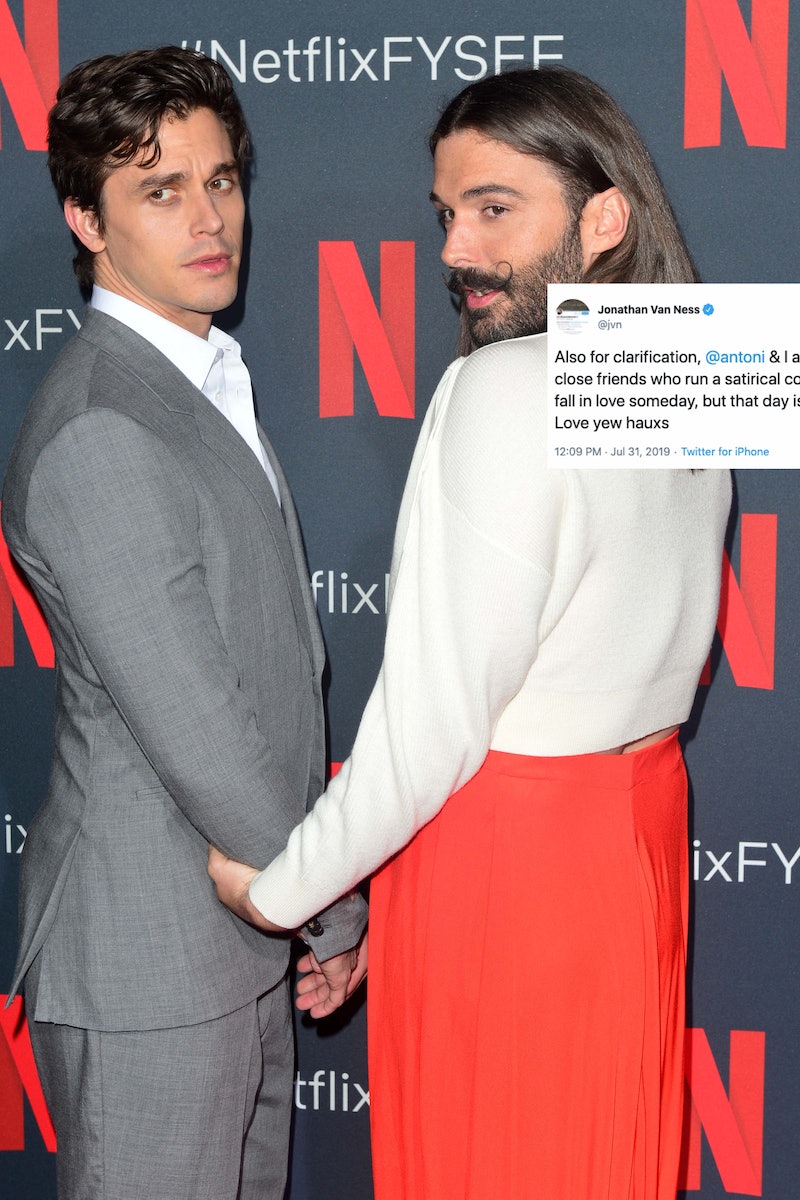 Holding hands. Exchanging loving gazes. Smooching cutely and posting pics of said cute smooches on social media. These are all things that couples do — and, in this case, things that costars do to lightheartedly troll fans into thinking they're a couple. So, sorry, Queer Eye loyalists, but Antoni Porowski and Jonathan Van Ness definitely aren't dating. While you might have thought (and hoped) otherwise, the pair recently commented on the rumors via Twitter, and what they wrote made their relationship status abundantly clear.

Over the past few weeks, Porowski and Van Ness have had tongues wagging and wondering whether or not they've gone from costars to a real-life couple. It all started during the 4th of July long weekend, when Porowski shared a series of pics, the first of which showed him and Van Ness locking lips. "I guess Amurica’s birthday’s our anniversary, babe," he captioned the shot.

OK, so they weren't exactly "locking lips" —  it was more like a polite pucker-up. Porowski's caption made the whole thing kind of confusing, though, and left many fans wondering, "Well, are they or aren't they?"

Over the course of the month, the pair continued to fuel romance rumors with a few more deceivingly intimate Instagram pics. Then, their friend and Queer Eye costar, Karamo Brown, further added to the confusion, thanks to a comment he made on one of those photos which seemingly confirmed their relationship.

On July 31, however, Porowski and Van Ness finally decided to drop the facade with a joint statement they each shared on their respective Twitter accounts. "Also for clarification," Van Ness wrote, "@antoni & I are a couple ... of very close friends who run a satirical couple account and may fall in love someday, but that day is not necessarily today. Love yew hauxs." Porowski posted a near-identical message, just with Van Ness' name swapped in and a different send-off.

The satirical account mentioned in their tweets is an Instagram handle called @jvntoni (and it's still active, by the way). The account's bio reads, "A love that is," and it's filled with cute pics of him and Porowski in various states of adorableness. Basically, it's a page devoted them as a couple. Well, them as a faux couple, as fans now know.

Fans will just have to settle with them being friends. To be fair, Van Ness did try to squash the rumors immediately after Porowski's Independence Day weekend post. On July 5, he shared a pic of him and the Queer Eye foodie embracing with a caption that confessed, "It was all Antoni’s idea ... but maybe someday we will fall in love," he wrote, tagging @antoni and adding "#notacouplebutitwasfunright" at the end.

Isn't it kind of curious, though, that Van Ness and Porowski's Twitter statements said that they "may fall in love someday," but not *necessarily* today? What does that mean? It sure doesn't seem like something that purely platonic friends would say. Are they still pulling our legs with that deliberately ambiguous suggestion? *Sigh* Who knows. #jvntoni4ever

More like this
We’ve Got A Text! Another 'Love Island' Series Is On The Way
By Darshita Goyal
Khloé Kardashian’s Son Was Born A Week Before Anyone Realized
By Jake Viswanath
Prince Harry Discusses The “Planting Of Stories” In Tell-All Netflix Documentary
By Jake Viswanath and El Hunt
Julia Haart’s New Company Haart Sphere Still Doesn’t Seem To Exist
By Brad Witter
Get Even More From Bustle — Sign Up For The Newsletter