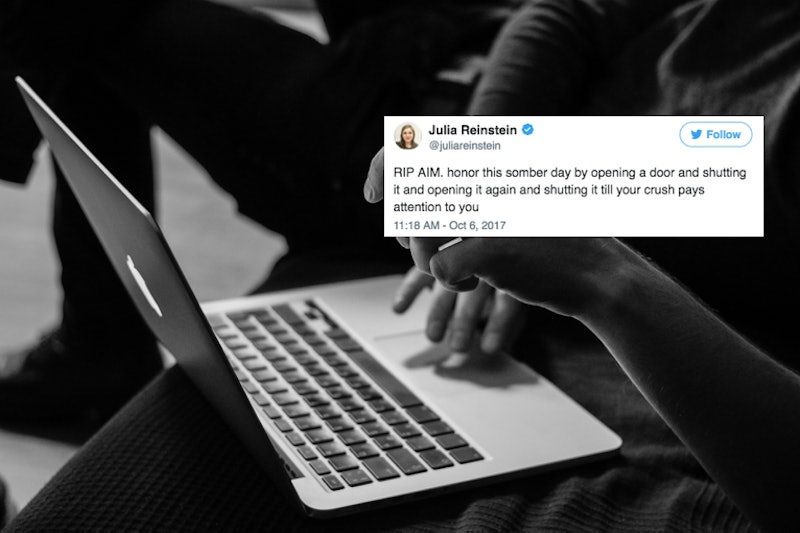 If you were a teen or tween in the late '90s, you likely spent hours tying up your family's phone line while you were chatting with your besties on AIM. For y'all, I have some sad news: AOL Instant Messenger, aka AIM, is shutting down, but the good news is that people are sharing their painfully cute AIM memories on Twitter. While the instant-messaging pioneer won't live to see its 21st birthday, people are still giving their beloved AIM plenty of love.

Back in the days of dial-up internet service and landlines, AIM was the first form of text-based instant communication. And, with the advent of AIM many older Gen Xers and Baby Boomers mourned the death of the handwritten note bemoaning "kids these days." Now, younger Gen Xers, Xennials, and Millennials are feeling part of their past slip away as AIM goes the way of its predecessors. While with the introduction of iMessage, Facebook Messenger, and apps like WhatsApp, AIM hasn't been a significant messaging contender for years it's a sad moment when you realize that you're old enough that something from your childhood has become irrelevant in the modern world.

"Right now you might be reminiscing about how you had to compete for time on the home computer in order to chat with friends outside of school. You might also remember how characters throughout pop culture from You’ve Got Mail to Sex and the City used AIM to help navigate their relationships," Oath Vice President of Communications Product Michael Albers wrote on the blog AIM Memories. "In the late ['90s], the world had never seen anything like it. And it captivated all of us."

Like Carrie Bradshaw on SATC, I was late to computers and AIM, mostly because my school didn't have computers and I didn't have one at home. I remember having major FOMO when I heard about my friends chatting on AIM when I still had to use the old-fashioned phone and write my notes on paper. AIM opened up a whole new avenue for communicating with friends and crushes, and quickly replaced the old way of flirting — calling your crush and hanging up on them.

Last night when my roommate and I were walking our dogs, we talked about the '90s, and we were both in disbelief that the '90s — the best decade ever — was 20 years ago. How is that possible? It feels like yesterday that Richard Gere had that giant cellphone in Pretty Woman, and AIM felt like the most innovative thing ever. Little did we know that we'd eventually be able to carry an entire computer in our pockets.

"AIM tapped into new digital technologies and ignited a cultural shift, but the way in which we communicate with each other has profoundly changed," Albers wrote. "As a result we’ve made the decision that we will be discontinuing AIM effective Dec. 15, 2017."

While it's pretty hard today to imagine life without status updates from everyone you know and thousands of people you'll never meet, before AIM, this type of oversharing didn't exist. AIM's away message was our introduction to status updates, which have now become as much a part of life as breathing.

These days you might update your status on your various social media platforms eleventy million times a day, but in the olden days — back when we had dial up and the clunky computer was plugged into the wall — you likely spent hours trying to sound just the right amount of emo and clever so people didn't think you were trying too hard to be either.

The AIM away message was also our introduction into what is known today as "vague-booking," which is when someone posts a super cryptic message on Facebook that is directed at a particular person but no one else understands.

Basically, AIM taught us how to be passive aggressive.

AIM will officially log off Dec. 15, 2017 so you still have two months before it disappears forever.

So, if you need some fodder for #FlashBackFriday, spread the love for AIM — it literally changed our lives. It's the end of an era, and it's perfectly acceptable to have a tear in your beer tonight. RIP AIM. #SadFace