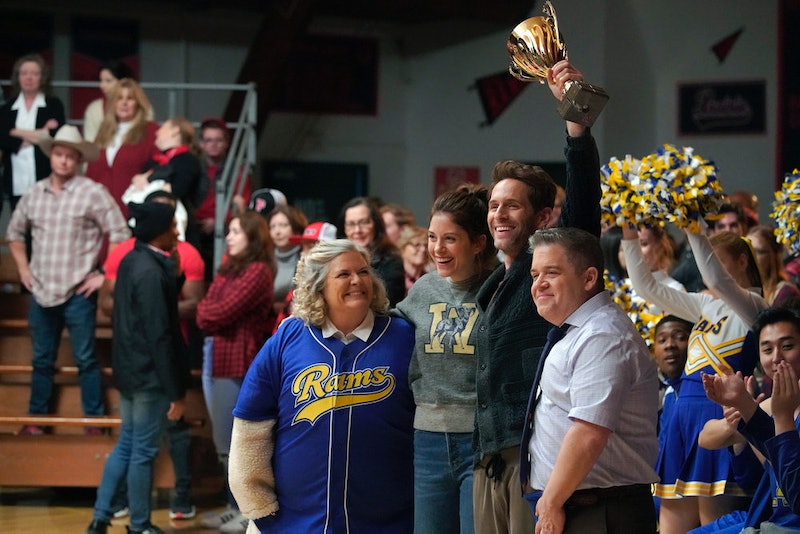 Update: NBC 's currently unnamed streaming service has revived A.P. Bio for a third season, according to The Hollywood Reporter.

Earlier: Turns out you might not need to shut up next school year because A.P. Bio won't return for Season 3. TVLine reported that creator Mike O'Brien shared on Twitter that NBC canceled the Glenn Howerton comedy with four episodes still left in Season 2. The final two episodes will air on June 13 at 8:30 p.m. ET. The prospect of more episodes of A.P. Bio seems as unpromising as Jack Griffin's efforts to get out of Toledo, but the cast has been encouraging fans to get the show renewed with #SaveAPBio. But if their efforts fail, we have some other shows featuring the cast of A.P. Bio that may help you get through these dark times.

O'Brien tweeted out the cancelation news on May 24 and soon after, cast members like Patton Oswalt asked Twitter #SaveAPBio. Leading up to the Season 2 finale, Howerton, Oswalt, and O'Brien were still pleading with fans to keep the show going. But just in case you won't get to see the halls of Whitlock High School ever again, there are plenty of other TV series out in the world that feature the A.P. Bio cast. Unfortunately, many of Mr. Griffin's students don't have the acting résumés that the adult actors do (although you can see Dan Decker actor Spence Moore II in 13 Reasons Why).

So you'll want to be on the lookout for those younger actors to showcase their skills in other projects after A.P. Bio. And in the meantime, let the adults keep you laughing with these 13 shows.