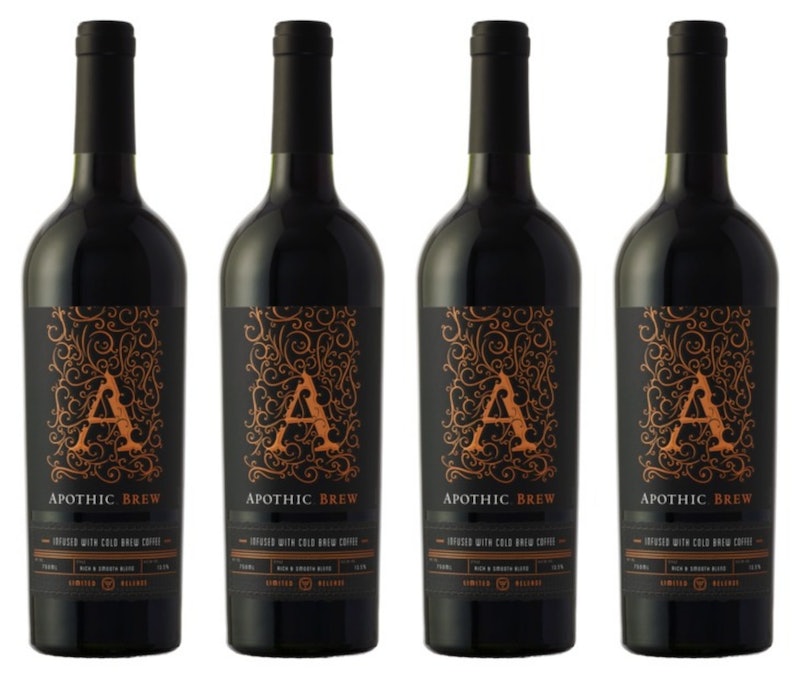 Good news, coffee and red wine lovers: Apothic Wines' cold brew coffee-infused red wine, Apothic Brew, is available again in 2019. Hoorah! You’ll have to act fast to get it — and it’s only available in one place — but for such an unexpectedly tasty wine, let’s face it: Any bottles being available is a good thing. So, if you’ve been continually coming up empty every time you’ve looked for the stuff in recent memory, look no further; instead, just head to online wine retailer The Barrel Room.

Apothic Brew originally debuted in 2018 to… well, not exactly "acclaim"; "initial confusion which gave way to approval" is probably closer to the mark. Although coffee and red wine have a lot in common — indeed, they’re often paired with similar foods (coffee and chocolate? A-plus. Red wine and chocolate? Also A-plus) — putting the two together into one drink struck many people as a little odd.

However, the proof, as they say, was in the pudding, with taste tests revealing it to be a delicious treat. Refinery29 likened it to “a toned-down version of red wine hot chocolate”; Cosmo noted that it had “a very strong coffee aroma,” but tasted “more like red wine with hints of chocolate than your straight-up morning cup of joe” (the phrase “oh my God, the stuff is good” was also used); and Busted Wallet appreciated the balance of “a mix of dry grapes… with the tenderness of the chocolate,” calling it “new, unique, and… very good.”

Since then, Apothic Brew has been available at select retailers nationwide, as well as online — but, as is typically the case with limited releases, bottles have become few and far between. And now, there’s both good and bad news about its continued survival.

Let’s get the bad out of the way first: Right now, Apothic has no plan to add Apothic Brew to the permanent lineup. Sorry, anyone who decided upon its release that Apothic Brew was their go-to wine forever after.

However! The winery did just dig up a small stash of bottles of Apothic Brew it had tucked away somewhere — and the good news is, they’re making that stash available for purchase. Starting today — that’s Friday, March 8, 2019, for those keeping track — Apothic Brew can be found at The Barrel Room. What’s more, if you use the code Brew3, you can get one cent shipping for orders of three bottles or more — or, if you use the code Brew6, you can unlock a price of $10 per bottle on orders of six bottles or more, plus one cent shipping. I don’t know about you, but I’d call that a steal.

Much like a Huffleclaw is very different from a Ravenpuff, coffee-infused wine is very different from wine-infused coffee. Apothic Brew is the former, consisting of a full-bodied red blend full of dark fruit notes that’s been infused cold brew, adding hints of mocha and chocolate to the mix. (You’re probably familiar with how cold brew is made by this point — it’s kind of, uh, everywhere these days — but in case you need a refresher, coarse ground coffee is submerged in cold water and left to steep for at least 12 hours; the result a smoother, less acidic brew than what you usually get with hot brewing methods.)You’ll also get a touch of maple and toasted oak on finish. Also, there’s very little caffeine — less than what you’ll find in a cup of decaf, which usually has around 5.4 milligrams per 12 ounces, according to Healthline — so it probably won’t keep you up at night if you, say, drink a glass with dinner.

Although the wine itself is a red blend, Apothic doesn’t specify on it website exactly which reds it blends. For what it’s worth, though, the standard Apothic Red blend comprises zinfandel, merlot, syrah, and cabernet sauvignon; its tasting notes include dark cherries, vanilla, and mocha. There’s no guarantee that Apothic Red is actually used in Apothic Brew, of course, but it gives us an idea of the kinds of blends Apothic usually produces. Just, y'know, FYI.

Head to The Barrel Room to grab a bottle — or two, or three. Cheers!