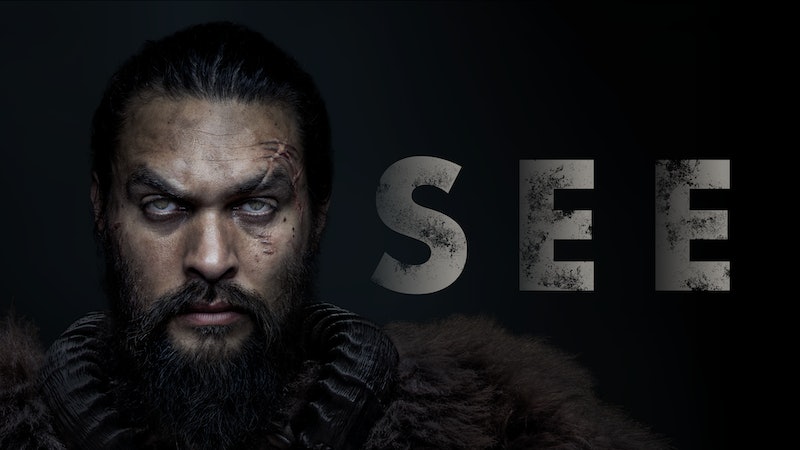 Jason Momoa's not a regular dad, in his new series, he's a dad that would kill anyone to protect his baby twins from harm. And Apple TV+'s See trailer shows exactly why he might need to go to such lengths to protect his family. The new streaming service's fantasy series takes place in a post-apocalyptic future where humans no longer have the sense of sight. Well, until his twins are born, becoming the first humans in centuries to be able to see. And, once word gets out about these little babies with the sense of sight, they are no longer safe, sending Momoa on a quest to protect them from harm.

Why these twins were born with sight remains to be seen, but the official synopsis for See obtained by Bustle via press release does explain how humans lost their sight to begin with. According to the synopsis, "a deadly virus decimated humankind," and the only survivors became blind. And this is how humans have remained for hundreds of years.

It's unclear exactly what threat two babies could pose to humanity — though their mother describes their sight as "magical or evil" — but, as is clear in the trailer, there's one woman who doesn't want to give them a chance to find out. A queen of a rival tribe, per the synopsis, this woman wants the twins killed. In the trailer she declares that the "evil of light once almost destroyed the world," and she seems pretty hellbent on making sure that never happens again.

When Momoa appeared at the Apple TV+ presentation in March, he teased the series. "Try to think about the world this way: heard, touched, smelled, sensed," he said, as reported by Entertainment Weekly. "Imagine every human experience available to you — love, joy, discovery, despair, and home — imagine it was all experienced this way... without seeing."

Meanwhile, Woodard teased that, when the show picks up, centuries after humankind lost the sense of sight, humanity has created a new society "designed and built to be experienced without sight." Though the trailer doesn't exactly show a clear picture of what this new society entails, the press release from Apple TV+ made sure to mention that the series "features cast and crew who are blind or have low vision," promising an authentic portrayal of blindness.

See will premiere on Nov. 1, the day Apple TV+ will officially launch. And it won't be the only original show to hit subscribers' screens that very first day. The Morning Show, starring Jennifer Aniston and Reese Witherspoon, will also premiere on Nov. 1. See and The Morning Show will be the first Apple TV+ originals to premiere this fall, and they're bound to bring in fans across the TV spectrum. After all, one is a newsroom drama featuring two of the biggest stars on the planet; the other is a science-fiction epic starring a Game of Thrones alum and Alfre Woodard. Even just one of these two shows would be worth the $4.99 per month subscription price.

So break open your wallets, TV lovers, because Apple TV+ is coming, and it's bringing The Morning Show and See with it.