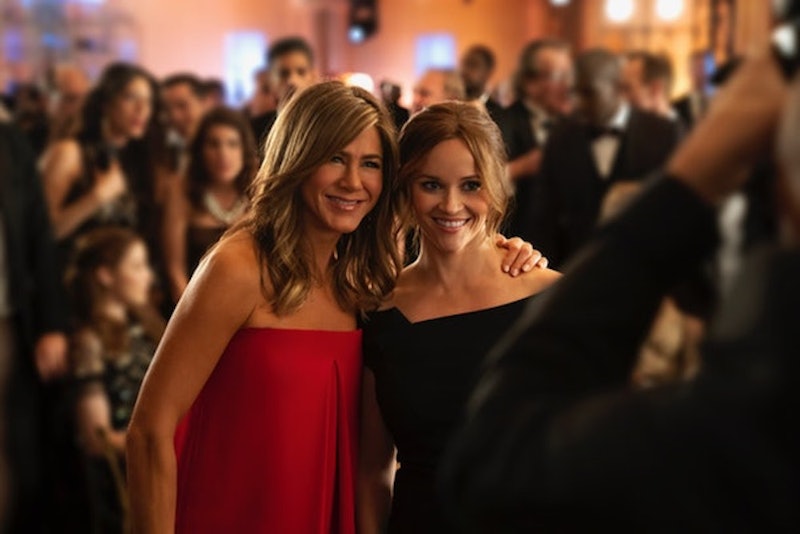 You've seen the trailers for some of its highly anticipated shows, but now Apple TV+'s price and launch date details have finally been revealed, and this new info will leave fans all the more excited for the streaming service to become available to the masses. On Tuesday, Sept. 10, Apple announced, as per The Hollywood Reporter, that the new platform will make its big debut on Nov. 1 and cost $4.99 per month for a family subscription — that's a dollar less than a basic Hulu subscription. Though, as a way to help encourage people to sign up ASAP, the tech giant is offering a year of TV+ for free to anyone who buys an Apple device. So mark those calendars and get those checkbooks ready!

Obviously, the low price is super appealing, especially for those who may have been hesitant to sign up for yet another streaming service. However, when you compare it to the prices of other popular streaming platforms, it's actually the cheapest of the bunch. Apart from the aforementioned Hulu cost, Apple TV+ pricing is also significantly cheaper than Netflix, which costs $12.99 per month for standard streaming (the same cost as Amazon Prime subscribers) and $15.99 per month for premium streaming. So if you were already thinking about signing up for Apple TV+ that decision may have just become that much easier now that you know your wallet won't be taking a huge hit.

A November launch date means that Apple TV+ will be debuting during the same month that Disney's own streaming service will become available to the public in the United States. The cost of Disney+ will be $6.99 per month, $2 more than Apple TV+, so in terms of just pricing, Apple is trying its hard to feel like the most appealing option to the masses.

It also doesn't hurt that the streamer has some significant star power tied to its upcoming original content, such as The Morning Show, which stars Hollywood icons like Reese Witherspoon, Jennifer Aniston, and Steve Carell. The story follows the drama that goes on behind the scenes of a morning news program after Aniston's character learns that her co-anchor (Carell) has been fired due to allegations of sexual misconduct. Though the show is classified as a work of fiction, it'll be easy for viewers to spot parallels to the real world, including Matt Lauer's firing and the #MeToo movement.

“This is the world we live in right now and it’s impossible to ignore it,” executive producer Kerry Ehrin said about the show's obvious nods to real life events during a recent interview with Entertainment Weekly. But the firing of Carell's character is only just the beginning of where this story will go. Life in itself is complicated, which is point that the series will aim to reflect. “Sometimes the world is so confusing that the only way that you can understand it is through art,” Witherspoon added during the same EW interview. “We don’t take sides in any of it. It’s about the humanity of these issues.”

And that's definitely a concept worth exploring, especially for only $4.99 per month.