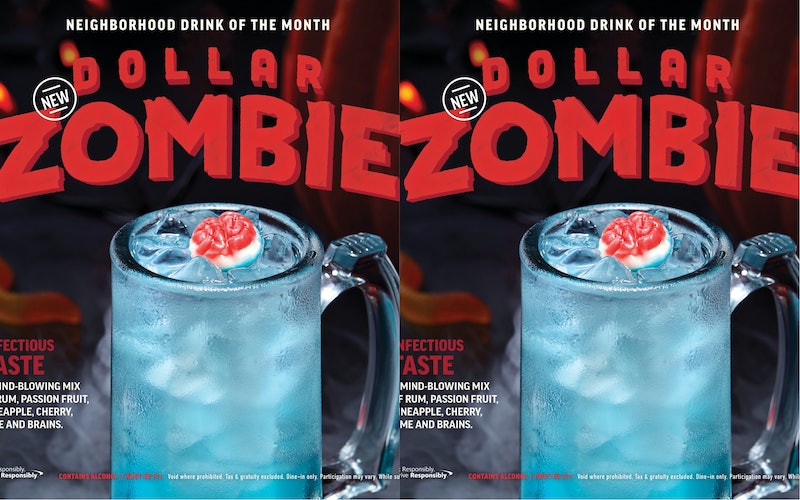 Today marks the first day of October, meaning we are definitively in the Season of Spook. Millennials are changing their Twitter names to Halloween puns, baby boomers are putting out ghoulish Halloween decorations, Gen Z is off doing something so hip that I won't hear about it on Tumblr for another two months, and Applebee's is tying it all together by uniting the nation in what they do best: introducing another dollar drink of the month to the menu. Applebee's has a Dollar Zombie drink all through October, and I can confirm that not only is it blue as Captain Planet, it is ridiculously, stupidly delicious.

The drink, despite its blue hue, is made with rum, with flavors of pineapple, passion fruit, cherry, lime, and brain, according to Applebee's. This spooky creation is also the first time that Applebee's has ever crowdsourced its Neighborhood Drink of the Month, so props to all of us, I guess. I'm proud that when given this amount of power, we immediately used it as an opportunity to create a drink so blue you'll wake up with a Smurf tongue the next morning and dub it after a reanimated corpse. Our species is truly something else.

"Halloween is a favorite holiday around here, and we're excited to offer guests the opportunity to celebrate all month long with our new DOLLAR ZOMBIE," said Patrick Kirk, vice president of beverage innovation at Applebee's, in a press release. "We invite people to get into the spirit early by trying our Neighborhood Drink with an infectious taste. The only thing to fear this Halloween is missing out on this awesome drink."

Extra incentive? The drink comes topped with a little gummy brain. Being undead has never been quite so precious.

Bustle had the opportunity to try the new Dollar Zombie just before it hit Applebee's locations. Although many of our coworkers were too cowardly to try it (you know who you are!!), those of us who did all enjoyed it, and came to the consensus that it was Jolly Rancher-esque in taste. It was sweet, but not aggressively sweet, and the addition of the gummy zombie truly elevated it to new spooky heights. (In fact, I'd argue the sour gummy is the best part, and there isn't even any alcohol in that.) For those of you wondering if you can taste the alcohol, the flavors in this drink are potent enough that it isn't all that strong, if you're not into that. If you are — well, maybe just order directly from the bar (but know that you're not getting a gummy, and your life will be a little less full for it).

The availability and hours of the Dollar Zombie special vary depending on the Applebee's location, so call ahead if you're worried. Anyway, if that's not enough incentive to get to an Applebee's, please also recall that the chain is selling massive Quesadilla Burgers, and if that and a zombie-themed drink can't get you in the door, I honestly don't know what will. Zombie responsibly, y'all!