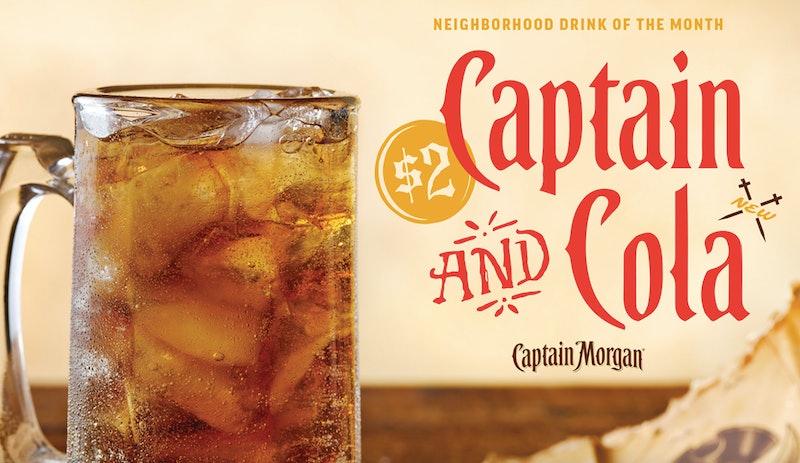 Each month, Applebee's offers a special alcoholic beverage at a very low price. Sometimes they're themed to the time of year, sometimes they're just whatever might go down easy with a plate of riblets. And now, the the first drink for the new year is here. Applebee's Neighborhood Drink of the Month for January 2019 is Captain and Cola. It's simple. It's easy. It might remind some people too much of college, but that's on us — I mean, them.

The Captain Morgan Spiced Rum and Pepsi Cola — Yes, Pepsi. Not Coke. Debate amongst yourselves — will go for $2 all month long at participating locations. Also, it will be served in a 10 oz. mug, in case you were wondering.

According to Patrick Kirk, vice president of beverage innovation at Applebee’s, "Rum and cola is a classic combination, but we wanted to make it special when we picked it for our next Neighborhood Drink of the Month, so we crafted it with our number one selling rum, Captain Morgan."

Kirk also notes that it could help after a long day of returning a bunch of presents you didn't want. "When you get your hands on a mug of Captain and Cola for only $2, it's going to feel way better than returning those holiday gifts. You’re welcome." It might feel even better if you buy the rum and colas with the money you get back from returning the gifts.

Captain and Cola might seem like a pretty simple choice, but it actually is mixing things up quite a bit from other recent Drinks of the Month. In December, the chain featured Dollar Jollys, which were vodka drinks flavored like Green Apple or Cherry Jolly Ranchers and, if you couldn't tell, cost a dollar. November was $2 Bud Light drafts, which was actually a nice reprieve, because October was Dollar Zombies: rum, passion fruit, pineapple, cherry, lime, AND BRAINS. (While "brains" were actually listed as an ingredient, this simply referred to the brain-shaped candy garnish.)

In addition to the latest Drink of the Month, Applebee's also just announced the return of All You Can Eat Riblets & Chicken Tenders with a new addition: The deal now features all you can eat Double Crunch Shrimp, too. The promotion starts at $14.99, and the price may vary by participating location. The meal also includes coleslaw, All You Can Eat Classic Fries, and dipping sauces, like Honey BBQ sauce for riblets, Honey Dijon for chicken tinders, and cocktail or tartar sauce for the shrimp.

For those who aren't in the know, Applebee's notes that customers can start with one choice of meat (riblets, chicken tenders, or shrimp), but can switch things up when they get their next round.

According to the restaurant, "In 2019, Applebee’s is the trusted place to cure your most insatiable appetites!" And, uh, yeah, based on the whole All You Can Eat thing that seems about right. If you like Applebee's, you've certainly got some choices to make this month.