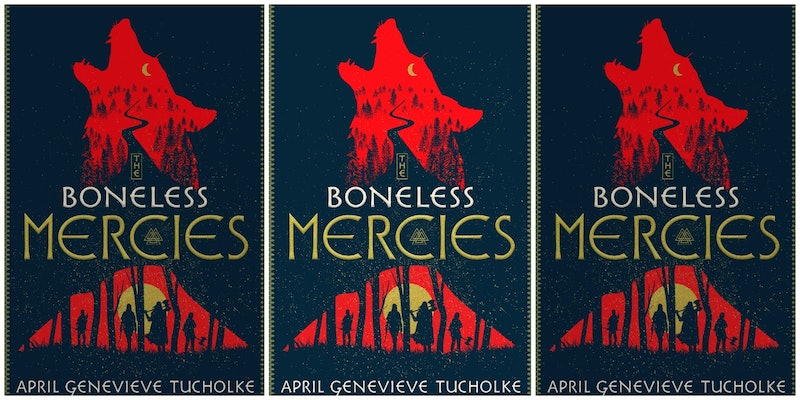 The cover for The Boneless Mercies was illustrated by Will Staehle and designed by Elizabeth H. Clark
By Kerri Jarema
Dec. 8, 2017

If you were ever forced to read Beowulf in school, the idea of a YA Beowulf retelling is probably super unappealing to you. As action packed as the epic poem is, the language is notoriously hard to read, and the plot is, well, not exactly riveting. But, what if I told you that the YA retelling in question was actually by author April Genevieve Tucholke, and that it is a dark YA fantasy about a band of mercenary girls in search of female glory? Yeah, I thought that might grab your attention. Bustle has the exclusive cover reveal and entire first chapter below!

The Boneless Mercies, which is due to hit shelves on October 2, 2018, is being billed as a highly feminist and genderbent retelling of the legend of Beowulf, that follows a band of female outcasts who use their disenfranchised status to their advantage in order to survive their brutal world. And let me tell you, if I had been asked to read that in my college English class, it would have made finals week a whole lot more fun. And with just one look at the stunning cover, illustrated by Will Staehle and designed by Elizabeth H. Clark, you'll probably be just as excited as I am.

And if, also like me, you just cannot wait to start getting acquainted with this band of kick ass women, you're in luck. Because Bustle's got the entire first chapter of The Boneless Mercies below. Hopefully this will help to tide you over until October 2018.

They say dying makes you thirsty, so we always gave our marks one last drink.

I reached for the flask of black currant Vite I carried in my pocket and put it to her mouth. “Here,” I said. “Drink this, lamb.”

She took a long sip. I pulled the flask away and wiped a drop from her lips. They felt plump and warm under my fingers, like a red plum in August just picked from the tree. I called all our marks lamb. Even the big ones, with thick beards and hands the size of boulders. Even the mean ones, with cold, shriveled hearts and dried blood under their fingernails. This lamb was neither.

She was covered in black silk, head to toe. The silk clung to her curves and moved lightly through the air as if woven from soft summer breezes. I wanted to touch it. I wanted to wear it. Our thick Vorse wool and furs and leather kept us warm, but they were utilitarian and plain next to her delicate dress.

"You’re from Iber.” Runa stared at the woman’s clothing as well.

The woman nodded. “I grew up with soft white sand, instead of snow. The sun shone bright and brazen, and women had fire in their blood.”

She’d hired us herself. She wanted to die. Her husband, children, all dead from sickness. How she ended up in a dark, sod-roofed house on the other side of the Black Spruce Forest, I didn’t know.

The woman in silk was tall, taller than me, taller even than Runa. She had deep brown eyes and pointed ears like the Elvers in Vorse fairy tales. She took another sip of Vite when I offered it, and then slipped a gold coin into my hand.

“What’s your name?” she asked.

She sighed and leaned against me, her soft arm against my hard shoulder. I pulled her black hair away from her cheek, softly, softly, my knuckles across her skin. Her hair felt heavy on my palm, and it bore scents of the south. Myrrh and frankincense.

“We will do it quick, lamb,” I said. “As promised.” She looked up at me. Her smile was swift and kind and sad.

I motioned to Ovie in the shadows near the cold hearth, and she came forward, taut but quiet, like a snow cat on the hunt. Juniper, our Sea Witch, began to pray in the corner by a pile of hides and an old loom. Trigve stood by my side, and Runa simply watched us from the doorway.

Ovie handed me her knife—it was better made, sharper than mine. I took it and slit the woman’s neck. A flash of sharp silver, and it was done. The woman kept her eyes on mine until the end, never looking at the knife. I caught her as she fell to the floor.

Juniper finished her prayers and came over to us. She put her hand on the mark’s chest, and her curls fell over the dying woman’s cheeks. Juniper’s hair was blond, with a faint shimmer of pale, pearly sea green, the same as all the witches of the Merrows.

We waited for the mark’s breath to slow. Slow, slow, and stop forever.

“I bet she was fierce when she was young.” I closed each of her eyelids with a gentle push of my thumb. “Fierce as the Iber sun. I wonder if she was banished here, to the frigid north, for some fierce, heroic deed . . .”

Runa looked at me, sharp.

She said it was dangerous, this way I had of thinking about our marks after they died, imagining how they had lived, dreaming how their lives had played out, the twists and turns they had taken. She said all that dreaming was either going to get me into trouble or turn me soft.

She said it was dangerous, this way I had of thinking about our marks after they died, imagining how they had lived, dreaming how their lives had played out, the twists and turns they had taken."

Runa would have made a good Mercy leader. She could have gone off and started her own Mercy pack. Though when I admitted this once to Juniper, she’d just shrugged and said leadership took imagination as well as strength.

Runa stood then and began to explore the cold, empty house. I knew she was looking for food and clothing and weapons. I caught her halfway down a shadowed hallway leading to more dark rooms, old bearskins hanging in the doorways.

She’d glared at me, mouth tight above her pointed chin. “There might be something hidden—treasures from the south, desert jewels we could sell for enough gold to book passage aboard a ship . . .”

“No.” Ovie’s deep voice echoed down the corridor. “We will not steal. Leave her things alone, Runa.”

Trigve and Juniper stood silent behind Ovie, though Juniper fidgeted, at war with herself. Her thieving urge was strong . . . Siggy had told us time and time again that the gods were watching and that they would punish a Mercy who took anything other than coin from a mark.

I cut a lock of the Iber woman’s hair before we left. I slipped Ovie’s dagger under her head, metal scraping the cold stone floor, and sliced. I put it in my pack.

Runa had taken things in the past from our marks: simple, useful things. She kept a strong coil of hemp rope in her pack and all other sorts of stolen odds and ends: strips of leather and metal hooks and pieces of old wool and vials of potions and tonics. Runa usually did as she pleased, and I admired her for it.

Afterward, we waded into a nearby stream to wash the blood from our hands. We tried not to get blood on our clothing. Whenever we met people on the road, their eyes flashed to our black cloaks . . . and then to the old red stains on our plain wool tunics. It reminded them that one day their blood might be staining our clothing as well. People didn’t like to think about this.

Afterward, we waded into a nearby stream to wash the blood from our hands. We tried not to get blood on our clothing.

The woman in silk didn’t want us to burn her. She asked us to leave her there in the forest, with the worn front doors of her home left wide open. The wolves would come and take care of everything after nightfall.

Walking away and leaving the woman’s body to be torn apart by beasts in the night took all my discipline, all my steel. I ached to set her body on fire and let her soul drift up to Holhalla while her flesh turned to ash. Or even put her safe in the earth, six feet deep, as the Elsh did with their dead.

How someone preferred to die said a lot about how they’d lived. The woman in black silk had wanted to die bloody.

And if she’d wanted a wild death, who was I to take it from her?

They called us the Mercies, or sometimes the Boneless Mercies. They said we were shadows, ghosts, and if you touched our skin, we dissolved into smoke.

We made people uneasy, for we were women with weapons. And yet the Mercies were needed. Men would not do our sad, dark work.

We made people uneasy, for we were women with weapons.

I’d asked my mentor, Siggy, about our kind one solstice night, when the light lingered long in the sky. I asked when the death trade had begun, and why. She said she didn’t know. The bards didn’t sing of it, and the sagas didn’t tell of it, and so the genesis of the Mercies was lost to time.

“Jarls rise and jarls fall,” she whispered, her dark eyes on the last orange streaks of light flickering across the horizon. “The Boneless Mercies remain. We have roamed Vorseland since the age of the Witch War Chronicles. Perhaps longer. We are ignored and forgotten . . . until we are needed. It has always been this way.” She paused. “It is not a grand profession, but it is a noble one.”

I didn’t answer, but she read my thoughts.

“This isn’t a bad life, Frey. Some have it much worse. Only fools want to be great. Only fools seek glory.”