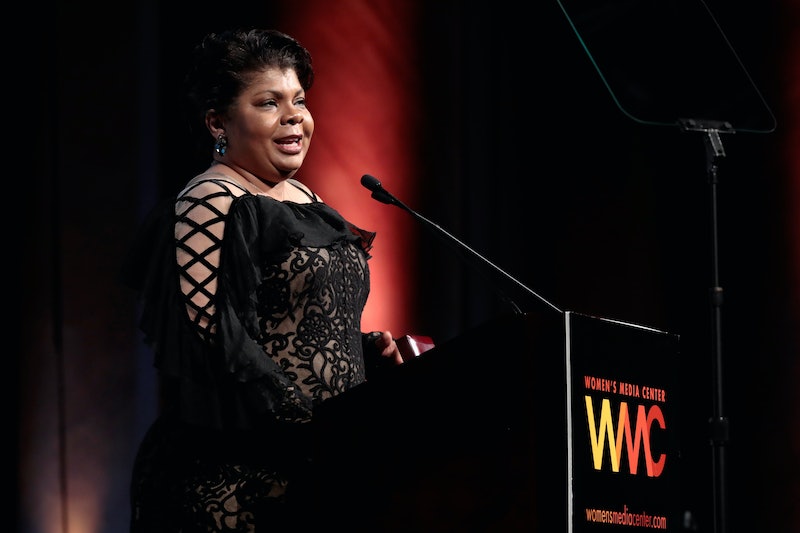 In the wake of a Fox News report that Trump canceled an annual White House holiday event for the media, April Ryan's holiday press party tweet set one thing straight. Ryan, who serves as the White House correspondent for CNN, had tweeted earlier in the day that the news was "sad." And when another Twitter user celebrated Trump's decision not to "bankroll" the event with "taxpayer" dollars, Ryan clapped back with the truth.

Ryan first wrote on Thursday morning, "This is just sad on a lot of levels!," including the link by Fox News that revealed Trump had canceled the yearly tradition. The article further noted that the White House did not provide an explanation for the decision.

Shortly after, a Twitter user wrote back to Ryan, "No elaborate party at taxpayers’ expense?? No sympathy here!"

Ryan didn't wait long to clarify the inaccuracy of this statement. She tweeted,

Ryan was right: The Republican National Committee would have paid for this event, along with a few others that occur throughout the year, according to ABC News. The Democratic National Committee did the same during former President Barack Obama's two terms.

Ryan also added a disclaimer on Thursday to her followers that clarified how she really felt about the news. "FYI, I had never planned to attend the White House Christmas party last year or this year," she tweeted. "Why break bread with folks who hate you & call you names? (@PressSec & @realDonaldTrump) That is not the Christmas spirit I know. I feel sorry for those who wanted to go and can't. SAD!"

As Fox News notes, the Christmas party was a decades-old tradition that allowed journalists, anchors, commentators, and more to mingle with White House officials, including the president himself.

Kathryn Watson, a White House reporter for CBS News, explained why some reporters might be upset about the canceled party. She tweeted, "I get how this comes off—the media complaining about Trump canceling their fancy party But it’s rare to interact w/ Trump or top officials at the WH in scenes that aren’t inherently a bit combative. These events help everyone see each other as real people."

Watson had also tweeted earlier in the day, "No big surprise here. But hey we’re still having our own party in the WH basement tomorrow so, Trump is welcome to stop by if he wants to."

Trump did host a White House Christmas party last year, Politico notes, though he was only there to deliver some remarks before leaving. What's more, the event has been criticized in the past for blurring the lines of ethics, and administrations from either side of the partisan line have been criticized for excluding journalists who didn't report on them favorably, according to Politico.

Trump will be spending the Christmas holiday at Mar-a-Lago, per the Sun Sentinel.