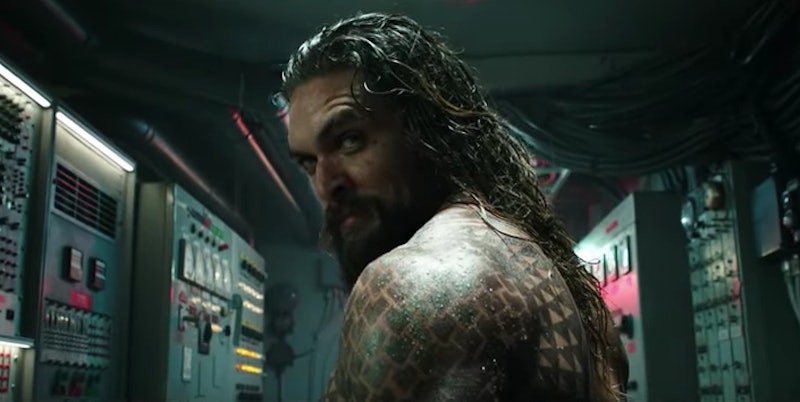 It may be that no other superhero actor resembles their character offscreen quite as much as Aquaman's Jason Momoa. It's not just that Momoa actually flaunts Aquaman's flowing locks even when he's not filming a DC movie, but that the Game of Thrones alum also has the ink IRL to match his superhero role. Aquaman's tattoos have a great deal of cultural meaning (as does one particular tat that Momoa has in real life), and it proves that the newest superhero movie has a lot more to it than what meets the eye.

Aquaman, which comes out on Dec. 21, tells the story of how Arthur Curry grew into his role as the King of Atlantis, and it doesn't take much screen time for him to start unveiling his symbolic armor of tattoos. One of the tattoos you see first is the same one that Momoa actually has in real life: a triangular pattern on his forearm.

In a 2013 Q&A session in New Zealand, the Hawaiian-born actor told the audience that his forearm tattoo represents his family crest, including their 'aumakua, — his family's spirit guardian. Momoa revealed that his family's 'aumakua is a shark, and that the tattoo represents shark teeth. "It's supposed to take the darkness out of your heart and bring the light in but we're still working on that" Momoa said at the Q&A.

According to Inked, Momoa's forearm tattoo representing his 'amakua is meant to protect the actor in the water by indicating to sharks that he's one of their kind so they don't bother him. Early on in the movie, a young Arthur shocks his land-bound peers on a school trip by commanding the attention of all the sharks and other fish in an aquarium. Knowing that Momoa has a real tattoo that's meant to spiritually communicate with sharks makes that scene all the more meaningful.

Momoa talked with The Daily Beast back in 2015 about playing such a unique and culturally significant superhero. "Aquaman is especially cool because being a Kanaka Maoli — being Hawaiian — our Gods are Kanaloa and Maui, and the Earth is 71 percent water, so I get to represent that," he said. "And I’m someone who gets to represent all the islanders, not some blond-haired superhero. It’s cool that there’s a brown-skinned superhero."

Arthur Curry has way more tattoos than Momoa, however. And the designs you'll see during his first standalone movie weren't arbitrarily chosen. Tattoos are important in Polynesian culture, especially symbols of the gods. As Momoa explained to Nerdist, "A whole lot of our [Hawaiian] gods are water gods," so it's natural for islanders' tattoos to relate to the water, like Aquaman's do.

If you look at each of Aquaman's tattoos in the movies, you'll notice that many of the patterns adorning the ocean king's body resembles traditional Polynesian tattoos, each with different meanings. For instance, Screenrant points out that the images of spearheads appear to cover Aquaman's upper-arms, to signify armor. According to Zealand Tattoo, spearhead tattoos can also represent the sting of some animals, like a stingray, for instance.

As distracting as Momoa's superhero torso may be, his Aquaman look was designed to be culturally significant, so pay attention! That Momoa himself has a tattoo that's incorporated into the character's collection makes it all the more authentic.

More like this
The 50 Most Powerful Characters In The Marvel Universe, Ranked
By Johnny Brayson and Nola Pfau
Lin-Manuel Miranda & Tituss Burgess React To 'Little Mermaid' Casting Backlash
By Radhika Menon
The 'Bachelor In Paradise' Schedule Shifts To 4 Hours Every Week After The Season 8 Premiere
By Brad Witter
Nicola Coughlan Shared A Lady Whistledown Excerpt From ‘Bridgerton’ Season 3
By Grace Wehniainen, Alyssa Lapid and Sam Ramsden
Get Even More From Bustle — Sign Up For The Newsletter