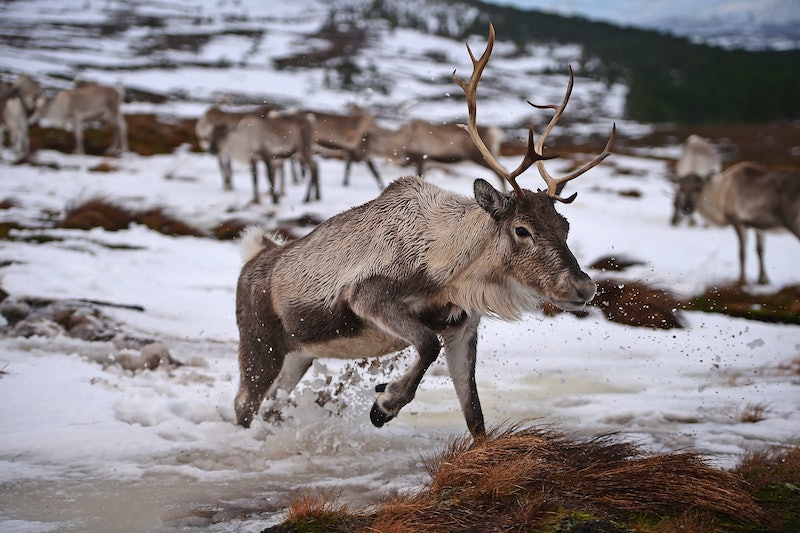 Wild reindeer in the Arctic may soon be reduced to the stuff of children’s tales, according to a new report evaluating the impact of climate change in the area. Over the last twenty years, herd populations of wild reindeer and caribou in the Arctic tundra have dropped by more than half, according to the Arctic Report Card, an annual report that’s been releasing updates on the status of the Arctic environment since 2006. One of the report's key findings: Arctic reindeer and caribou populations have declined by roughly 56 percent in the last two decades.

Scientists estimate there are around 2.1 million of the populations left in the area, though some herds experienced worse declines than others. In the Alaska-Canada region, for example, five herds were reduced by more than 90 percent, and don’t show any promising signs of recovering from this loss. The researchers noted that while it’s typical for herd numbers to fluctuate, many of the herds are exhibiting record low populations.

"We see increased drought in some areas due to climate warming, and the warming itself leads to a change of vegetation," Professor Howard Epstein, an environmental scientist and one of the authors behind the studies in the Arctic Report Card, told BBC News. He noted that increased rainfall in the region also often creates frozen layers of ice that cover the animals’ food source.

The warming temperatures also mean more insects in the Arctic. "If it's warm and not very windy, the insects are oppressive and these animals spend so much energy either getting the insects off of them or finding places where they can hide from insects," Epstein told BBC News. Some of the other contributing factors included predation (which includes hunting of the animals), the availability of food, and the presences of micro and macro parasites.

The news that numbers of Santa’s trusted helpers are declining is upsetting in and of itself, but the population decline also has extensive real-world repercussions. Indigenous people in the area who rely on the reindeer and caribou for food security and as culturally significant symbols are facing a threat to their way of life due to the duration and severity of the declines, the report notes. Wild reindeer and caribou are also “a key species in the arctic food web,” the report continues, due to their essential role in the habitat’s food chain and ecosystem.

The Arctic Report Card paints a sobering picture of the impacts of climate change in the region, as well as serving as an indicator of how these changes may factor into extreme weather and environmental shifts in the rest of the world. While it’s impossible to undo the current damage, the report notes that any efforts to reduce carbon emissions and contribute to limiting temperature increase on a global scale are the most important steps moving forward, as well as learning how to adapt to the ever-changing climate.