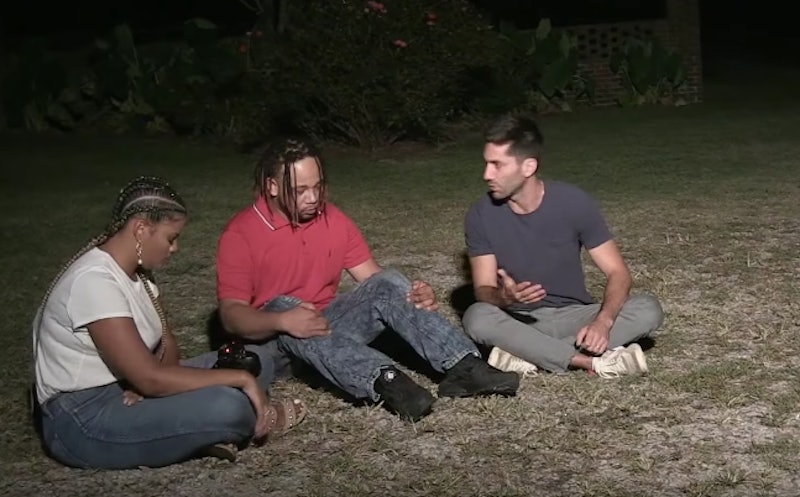 The last few moments of Alfred and Antonnio's Catfish episode appeared to put a clear end to their relationship. But their social medias might indicate otherwise. Alfred enlisted the help of Nev and Kamie to learn more about his new beau, Adonis, whom he had only spoken with over text. He later learned that Adonis was actually his ex-boyfriend, Antonnio, who had created the account to catch him cheating and strung him along for months.

After breaking out into a full-on brawl, they settled down to confront their issues, and ultimately decided that they were better off as friends. In their two month follow-up, they said they were co-existing at Antonnio's house for financial reasons, but Alfred was aiming to move out on his own with his two kids.

However, according to Antonnio's Facebook page, he is in a relationship. His partner is unnamed, but the status says he's been in it since 2014, which, according to the show, is when he and Alfred got together. This wouldn't be a peculiar discovery if his profile had gone unactive, but his last public post was shared on Nov. 22, two months after filming. Alfred's Facebook is set to private and publicly displays no relationship information.

Over on Instagram, Antonnio, who also goes by Tony, is clearly an aspiring influencer. His bio reads "IM ADONIS B*TCH" and none of his recent photos feature Alfred. He actually doesn't follow Alfred, but liked his most recent post about Catfish. Alfred does follow him. They also both went to a K. Michelle concert on Nov. 24, according to their Instagrams.

Whether or not they're still romantically together, they at least appear to have stayed in each other's lives. Alfred seems to be focused on his kids and his new fitness journey, according to his Instagram. His last post featuring Antonnio was uploaded in June 2019, long before Catfish visited in September.

Antonnio seems to be focusing on himself. On Dec. 1, he was featured on Johnny Keatth's Actors 2020 Podcast, where he spoke about his aspiring career as a reality TV star. He said he's appeared on three reality shows in the last year, including The Mel Robbins Show, Catfish, and Divorce Court. He said his episode of Divorce Court is expected to air in February. "Me and my boyfriend went on there to basically just, hash out some issues," he said. He didn't mention the boyfriend's name.

This one remains a mystery, but who knows — if Antonnio keeps shooting his shot on reality TV, he may appear onscreen sometime soon with an update.