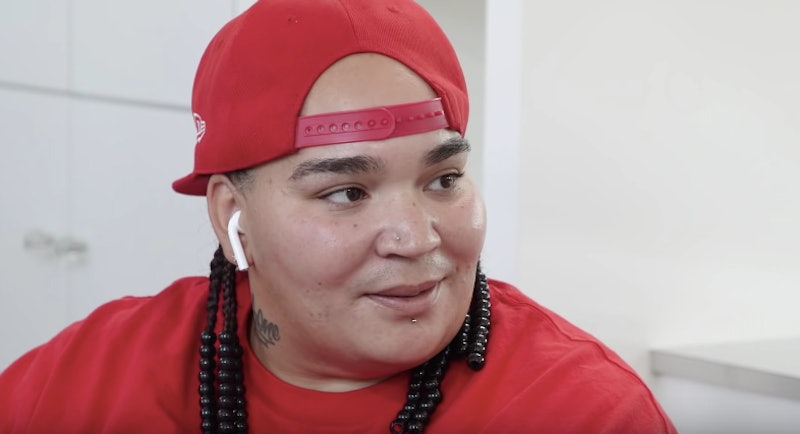 Nev and his co-host Kamie Crawford are back for Season 8 of Catfish, and they kicked things off by investigating a peculiar relationship between Red and Ashley, who Red knew as Jalissa. The two maintained an on-and-off relationship for six years after being introduced by celebrity hairstylist Shekinah Anderson — or rather, who Red thought was Shekinah Anderson. But all of the signs Nev would typically find in a catfish were there from the beginning. Jalissa wouldn't FaceTime with Red and constantly flaked on their plans. When she asked Red to meet her in Los Angeles, Red decided to make one final effort. To no one's surprise, Jalissa ghosted her, leaving Red in a new city alone. That's where Nev and Kamie came in, and it didn't take them long to peg Jalissa as a catfish: her personal account was fake, and she owned multiple others masquerading as famous people. Hesitantly, the person behind the accounts — whose full name is Ashley Taylor — agreed to meet them all in L.A. to explain.

Once in person, Ashley told Nev she was "addicted" to catfishing and had made over 3,000 fake profiles since she was 12. She said she'd formed the habit because of her experience with depression, her struggle to care for her sick mother, and the loss of her grandma. In the two month follow-up, Ashley confessed that she was still running the Jalissa and Shekinah profiles, but that she'd deleted some of her others and it was "the thought that counts."

Nev's subsequent lecture must've counted too, because the links provided to the Jalissa and Shekinah profiles on Catfish are no longer active. Ashley's personal Facebook page is, however, and it's set to private. Her cover photo is a picture of her late grandma.

Other social media profiles for Ashley are difficult to find, but Red is active on Facebook (no relationship status, sorry!) and Instagram. She has a Twitter, too, but her last post there was in July 2017.

Some of those old tweets tag an unverified Shekinah Jo Twitter that is still up and running, but many of the tweets she responded to have since been deleted. It's unclear if Ashley is behind the account, but whoever is has since deleted their correspondence with Red.

In her two month follow-up, Red told Nev and Kamie that her dog just had puppies. Naturally, she shared pictures of each pup to Instagram, and if you scroll back to two months before that, you'll find posts suggesting she's still struggling to find love. She shared a quote on July 6 that referenced liars and cheaters. "Why is it when all I want is to be in a committed relationship...I keep getting the liars and cheaters in my life," the quote read. The same day, she shared another cryptic post reading, "Be HER peace too because she goes through things just like you".

Most recently, Red dyed her hair red, and even got a red cast after breaking her leg in August. She may not be in a committed romantic relationship, but she's definitely dedicated to her personal brand.