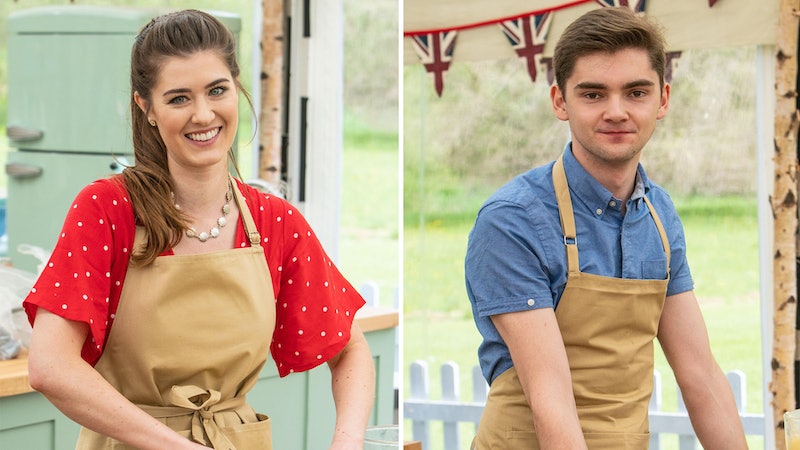 It may only seem like a few hours to viewers, but contestants on The Great British Bake Off are in that tent pretty much all day every day during filming. Being around a group of like-minded bakers for that long can result in lasting friendships, but romance has yet to grace the competition. However, some outlets are reporting that the 2019 series is set to change that. So are The Great British Bake Off's Alice & Henry dating?

If you haven't already added the bakers to your Insta feed, you may not be aware of the adorable snaps that Alice Fevronia shared of her and Henry Bird. "Bread week, come at us @henryfabird #flourpower #gettingbready," the caption reads. Bird also uploaded a similar pic, writing that Fevronia is a "veritable star baker [...] without a *shadow* of a doubt". As Metro points out, some of the comments below both posts suggest that Fevronia and Bird are dating, with fellow contestant Michael Chakraverty writing, "Such a beautiful couple."

The posts appear to be from a a trip the two of them took to London's Tate Modern, according to The Sun. "The Bake Off contestants do become very close, and Alice and Henry hit it off from the start as they have a lot in common," a source told the newspaper. "They confided in each other a lot during the process, which can be quite intense at times. And since filming finished, they have been spending more time together — including a few dates."

The source continued: "It is early days but they are a lovely couple and seem very happy. Pals have been joking that it's the cherry on top of the experience."

However, as exciting as the prospect of Fevronia and Bird dating is, it's not been confirmed by either baker. I've reached out to a Channel 4 rep for clarification on the rumours, but have yet to hear back. I'll let you know if I do.

However, Digital Spy recently reported that they've learnt the dating rumours aren't "actually true," but do not give any further details.

And it should also be noted that, although Alice and Henry have been photos with one another on social media, one glance at their Insta feeds will show you that they both hang out with all the other 2019 alums all the time. The group seem very close as a whole, which, yes, is absolutely downright adorable.

Regardless, I'm sure viewers will be in for more sweet moments between the two as the series goes on. Especially since bakers often spend up to 13 hours a day filming, as 2013 winner Frances Quinn told Cosmopolitan earlier this month.

"You haven't really got a life other than Bake Off. No social life. That was the most stressful time," Quinn explained. "We had to get a train down on the Friday and we'd have a wake up call at 5 a.m., we'd be in the tent at 7 a.m. We'd wrap filming at about 8 p.m. and then it would be the same again the next day. I'd get back at about midnight on the Sunday. It's not just a two hour bake with a few buttercups."

As filming for Bake Off has ended, the contestants have had plenty of time to catch up and hang out with each other. Whether or not Fevronia and Bird are more than just friends, they've certainly developed an undeniable bond with one another and the other 2019 bakers thanks to the Channel 4 competition.