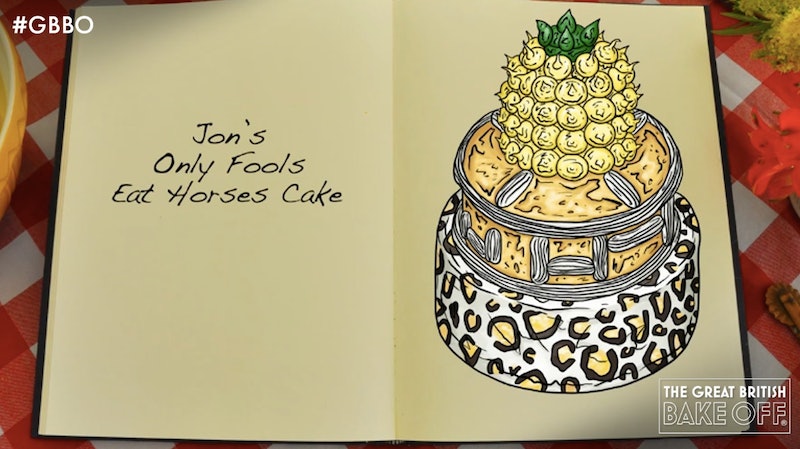 Baking is lovely isn't it? Such a wholesome and rewarding activity. One that you can share with not only your family but also friends and colleagues. Especially now The Great British Bake Off is on and lots of people are being encouraged to pop something into the oven. But, guys, it's about time we give props to the other non-baking parts the Channel 4 show. Not the hosts, the bakers, or the judges, but the illustrators. So, who does the illustrations for The Great British Bake Off? You know, the cute AF ones of each person's bake? Because we all know that's a huge highlight.

Well guys the incredible doodles come from the one and only Tom Hovey. According to his website, Hovey is a Welsh illustrator based in Bristol. Although he is best known for his work on the hit baking show, he is actually enormously successful all over the shop and covers a whole host of genres. His multi-disciplinary approach has garnered him all kinds of commissions including animation, apparel designs, animation, editorial, TV graphics, and, of course, food illustration. I mean what can't that man make look delicious?

Besides the Bake Off, Hovey has worked on other major TV shows, including Comic Relief and the National Television Awards. Plus big names such as Apple, ABC, Glastonbury Festival, Visit England, Penguin Random House, and Red Bull, to name a few.

He describes himself on his Instagram account as "the guy who draws all the cakes," and "food illustrator to the stars."

Hovey has been busy of late with all of his illustrations as season 10 of GBBO is back in our living rooms. And already taking up a heck of a lot of space in most people's consciousness. Because, well obviously, this is just pure entertainment isn't it? Even if you're a bit of a naughty type who watches it in the hope of seeing someone muck up. No shade, I'm fully that person.

This season kicked off with a bang and the whole gang came back but this time, in some seriously lit Wizard Of Oz looks. Which, I'll be real, Paul Hollywood didn't look delighted about. Although TBH I would probably be a bit miffed if I was lumped with being the tin man. Everyone knows Dorothy is where it's at.

This season has already hit the headlines for many reasons (not solely the costumes). One of the biggest things people are chatting about is the average age of contestants on the show. It's all gone a bit, well, millennial. Yes guys, over half of this year's contestants are in their 20s which, depending on who you ask, is a great thing or a dreadful one. Also, this year, instead of the usual 12 contestants, they've opted for 13. AKA a baker's dozen. Which seems a lot more appropriate considering the content of this show.

Judges Hollywood and Pure Leith are back to be all judgey and hosts Noel Fielding and Sandi Toksvig are serving not only witty commentary, but also serious love and support for the contestants.

As with previous years, there are already some instant fan favourites. And according to The Daily Star some viewers were a bit miffed with the first departure from the show: support worker Dan Chambers. However, Chambers maintained that he was the right person to go, saying:

"It's the nature of the show when something goes wrong on that particular week, you've had it, and I understand how the show works and I felt it was the right decision that I should go."

Watch The Great British Bake Off on Channel 4 Tuesdays at 8 p.m.

More like this
A Soap Legend Completes The 'Strictly' Christmas Special Line-Up
By Sophie McEvoy
5 Biggest Takeaways From Channel 4's 'Untold: Life After Love Island'
By Sophie McEvoy
Meghan Markle Just Addressed *Those* Wild 'Real Housewives' Rumours
By Sophie McEvoy
We’ve Got A Text! Another 'Love Island' Series Is On The Way
By Darshita Goyal
Get The Very Best Of Bustle/UK