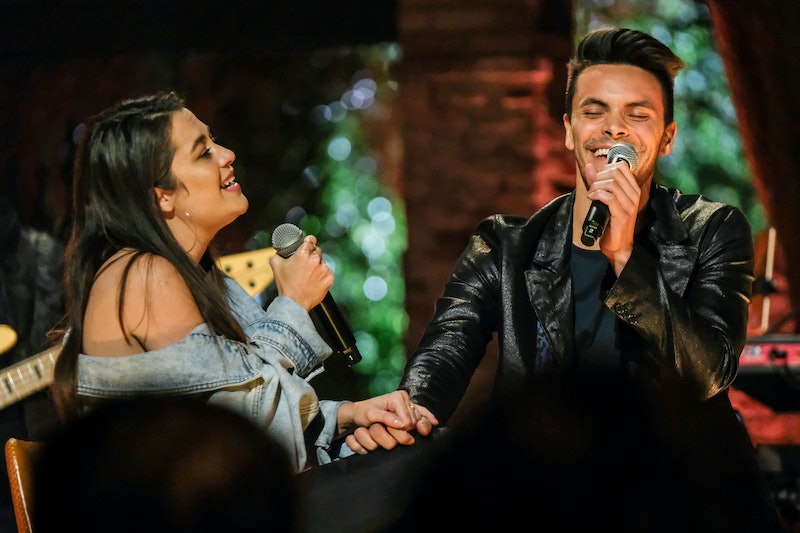 Danny and Bekah didn't get a lot of screen time on The Bachelor: Listen to Your Heart, but they did make a connection...even if the judges didn't quite see it onstage. Does that mean they kept pursuing a relationship even after leaving the show? It's hard to tell, but it looks like things may not have worked out. Neither Bekah nor Danny have left a whole lot of clues about their current relationship status on their respective Instagram accounts, as Bekah posts pretty infrequently and Danny mostly promotes his YouTube channel. However, it seems that they both still follow one another on Instagram, which suggests that at the very least, they're still on good terms. Danny has also liked quite a few of Bekah's recent posts, although she doesn't appear to have returned the favor.

Despite getting off to a seemingly strong start — whenever they were onscreen, Bekah and Danny were either cuddled up or giving each other their roses — it seems like the pair hit a rough patch after their first date. "Danny and I kissed the first night," Bekah told the cameras as she headed out on their photo shoot date. "We were really close at the beginning and we just need a chance to find our groove again."

But while Danny seemed to be completely smitten with the musical theater lover, she wasn't quite ready to make a commitment. "I think that you are an incredible human being," Bekah told Danny, before adding that it "takes [her] a while" before she starts feeling strongly about someone. "It seems like Danny likes me," she said in an interview. "He seems like a really great person and I like him a lot, but it puts a lot of pressure on me to feel something really quickly."

Ultimately, her hesitation about making a commitment to Danny came through in their performance of "Ho Hey" by the Lumineers, with JoJo Fletcher pointing out that Bekah didn't seem to reciprocate Danny's feelings. And even their fellow contestants noticed that something wasn't quite right between them: "They seemed like friends," Rudi told the cameras. "Like [he got] friendzoned hard."

In the end, it was that disconnect that resulted in Bekah and Danny being sent home. "I’m sure Danny is just crushed right now," she said in the car after they were eliminated. "I feel like I just disappointed him. I let him down. I know I did, I let him down." Danny, for his part, only had nice things to say to Bekah before they went their separate ways: "The idea of even pairing up with somebody as amazing as you, that’s just gold," he told her.