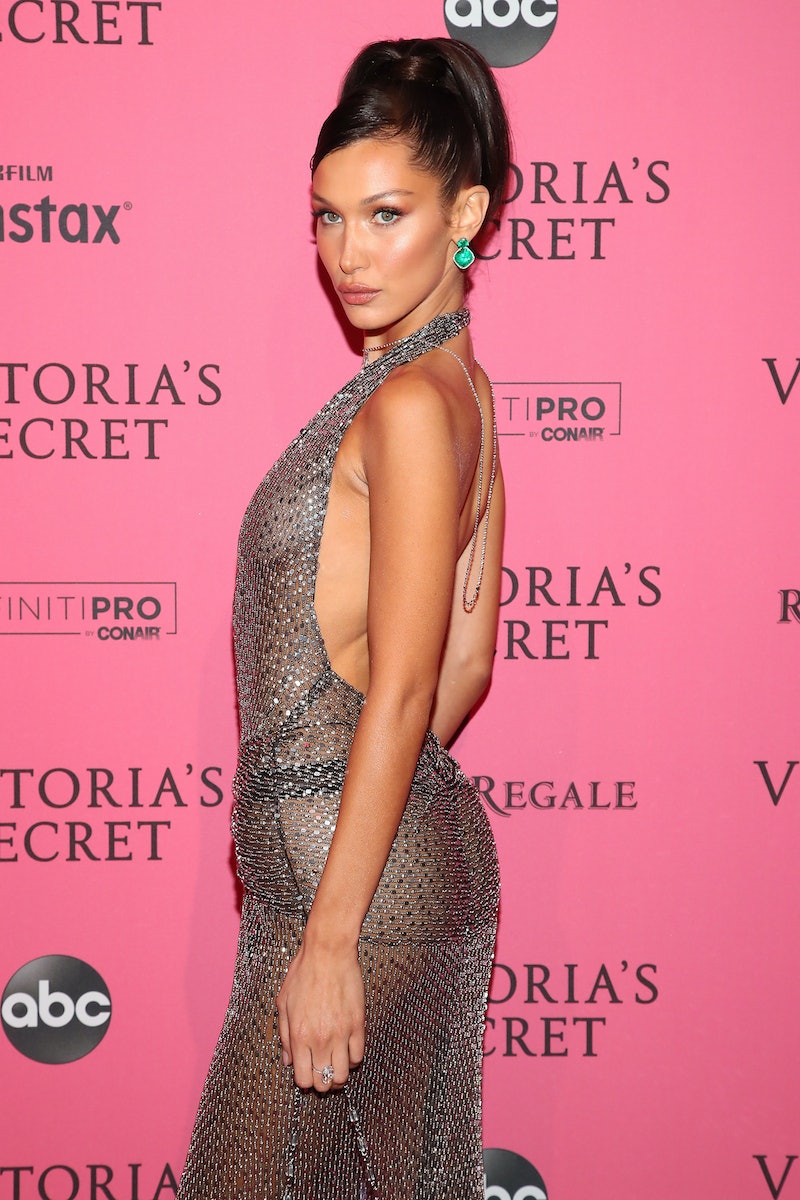 It looks and feels like bangs are asserting themselves as the hair trend of 2019 thus far. Bella Hadid has bangs now and she was totally twinning with fellow model Kendall Jenner. Jenner showed off long, wispy, and eyelash-grazing bangs on her personal Instagram earlier this week. They looked like clip-ins rather than freshly-cut fringe for her follicles. But they were still chic and she looked fantastic with 'em. Bella's bangs were super similar. But it's not likely that they were the real (or permanent) thing.

Gigi Hadid's little sister rocked eyebrow-length, face-framing fringe while at a Michael Kors event. Her brown locks were swept back into a tight ponytail so the bangs were a featured and prominent part of her coif.

Like Jenner, Hadid opted for loose, long bangs rather than a thick, straight, or blunt-cut version. You could see a little bit of her forehead through her fringe and that added an air of sexiness and mystery to her overall look for the evening. She slayed that black slip dress and those knee-high boots, too.

Also like Jenner, Hadid is known for preferring somewhat straight, center-parted brunette locks in her personal life. Sometimes, she switches up the length. But for the most part, chocolate strands that skim her shoulders are her "go to."

But back to Bella's feathery fringe. They were such a playful and pretty look for her. However, something tells me that the model was simply having some fun with her tresses and that she was trying bangs out on a temporary basis.

They looked like clip-ins — albeit incredibly realistic clip-ins. That way, the model can experiment with different looks without having to commit to a dramatic change that takes a more than a minute to grow out.

Hadid does have her hair signatures. She doesn't usually go for anything to unusual or outrageous with her strands and that's likely due to her job.

As a model, her mane needs to remain malleable and manipulatable for whatever campaign or shoot on which she is working. Therefore, the miracle of clip-in bangs give her some follicular freedom.

Perhaps Hadid will dig the bangs so much and will go under the scissors for a legit and more permanent snip.

This isn’t the first time that Hadid has added bangs to her ‘do. She rocked this wispy fringe, which also appeared to be clip-ins, last October at a True Religion event.

Shea also looked ravishing in red. She rocked this stunning sheer and scarlet dress with matching lipstick. Her updo was embellished with the sideswept and unstructured fringe.

You can continue to marvel at Bella Hadid with bangs via these pictures. It's not likely that the model will keep them long-term and they could very well be gone already. Clip-ins allowed her to indulge her mood and style as she pleased.

Faux or not, Bella Hadid's fringe was fab.

More like this
Bella Hadid's Curly Blonde Bob Is Peak Marilyn Monroecore
By Audrey Noble
Blake Lively Debuts Red Hair For The 'It Ends With Us' Film Adaptation
By Olivia Rose Rushing
The Best Beauty Looks Spotted At Paris Couture Week 2023
By Audrey Noble
Hailey Bieber's New Bob Is Short Haircut Goals
By Olivia Rose Rushing
Get Even More From Bustle — Sign Up For The Newsletter
From hair trends to relationship advice, our daily newsletter has everything you need to sound like a person who’s on TikTok, even if you aren’t.