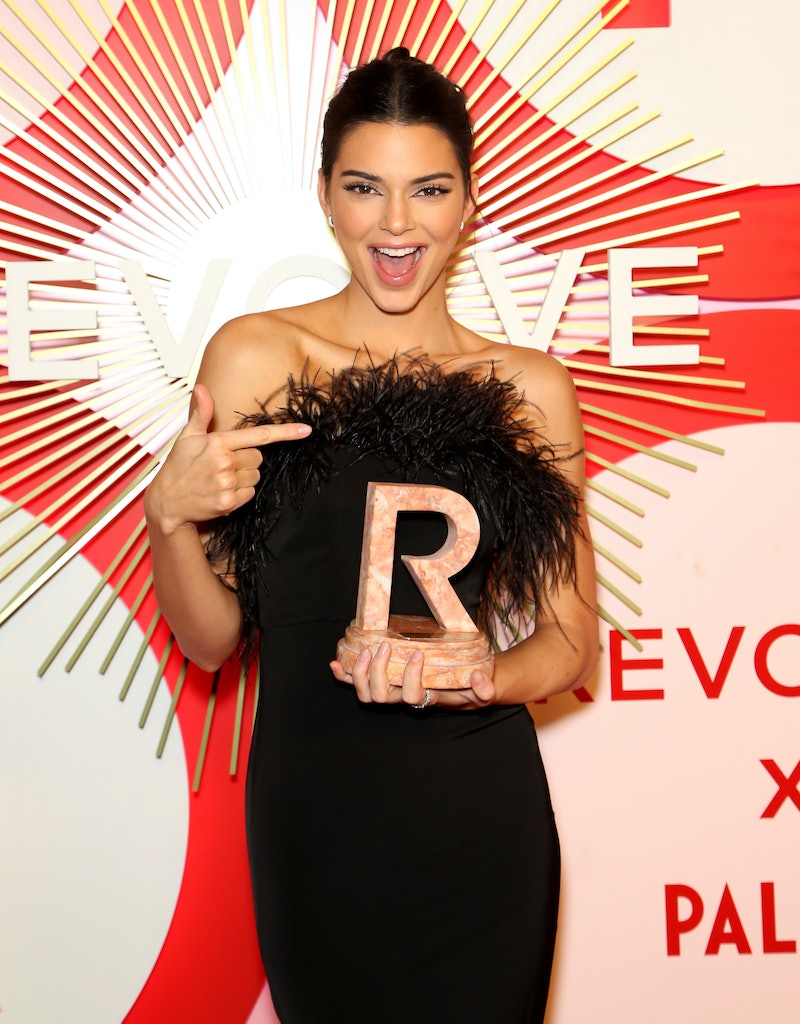 Are those real? The "those" in question are Kendall Jenner's bangs. The model and Kylie's older sister posted an image on Instagram, showing off her follicle fringe and rocking a playful, pouty-lipped pose. Jenner's bangs were super long, wispy, and lash-grazing. Seriously, they fell past her eyebrows and framed her face. The model coyly captioned the shot: "yes, no, maybe so?"

Maybe the bangs are all three — they exist but they are actually totally temporary and non-committal.

Jenner doesn't typically make dramatic or drastic changes with her hair. She is firmly committed to straight, shiny, and center-parted chocolate brown strands in her personal life. Sometimes, she goes shorter and opts for shoulder-skimming length. But for the most part, she leaves the mega long length and the wild color changes to her baby sister.

Perhaps Kendall Jenner's news bangs were for a photo shoot for a campaign or a magazine spread? Maybe she just wanted a short-term change? Or it could have been a test run to see how it looked before going under the scissors to snip, snip, snip away at her real hair.

Anything is possible. One thing is certain, though. Kendall Jenner looks fantastic with long and loose fringe.

Jenner clearly had fun while posing with her new 'do. She can have bangs for an hour or a day or a week with clip-ins and without having to make the major change that takes a minute to grow out. However, you never know. These faux-looking bangs might cause her to eventually rock the real deal.

Jenner also posted a short video while slaying her bangs. Here's why these bangs really work for her. They aren't blunt or baby bangs. They are whimsical and the longer, thinned out strands add an air of mystery. They also call attention to her doe eyes. Right? She also accentuated her lips with lots of liner and gloss.

Overall, it was quite a sultry look for Kendall.

Jenner added skinny, Matrix-like sunnies and matte lipstick in another video while riding in a car. She gave off a Kim Kardashian West vibe here, which makes sense — because, you know, sisters.

She offered a similar, smoldering pout last summer but with her hair slicked back off her face.

Flashback to the AMAs in November 2015. Jenner rocked the same extra-long and wispy bangs with a tight topknot to the music awards show.

While these bangs were longer, it's clear Jenner likes a piecey, defined, and messy bang style when she does opt for fringe.

It's a fun change from her usual and familiar look. Jenner is one of the more low-key members of the famous family so it was a rad change of pace to see here swap out her locks and get her pose on.

Will Kendall kommit to a koif with bangs? That remains to be seen. Something tells me they'll be a distant Insta memory in a few days. Still, she might inspire fans and followers to hop in their hairstylist's chair for some long, romantic fringe.