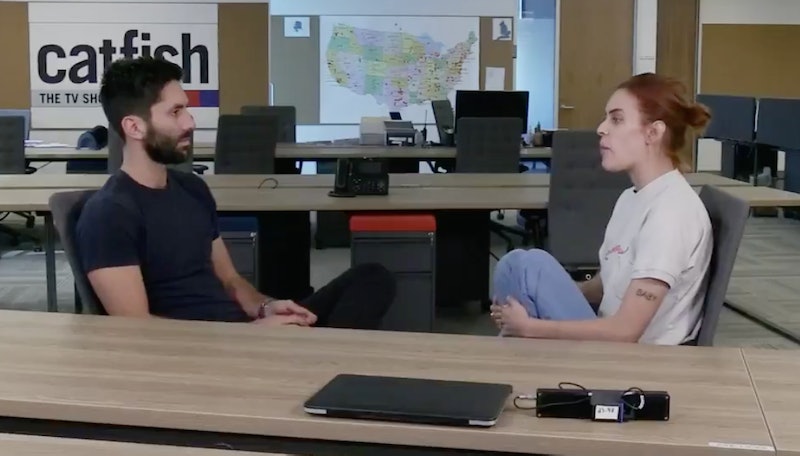 Spoilers ahead for Catfish Season 7, Episode 22. Falling in love with a TV celebrity seems to be a running theme on this season of Catfish. And most of the time, when a hopeful brings their case of starstruck romance to Nev, his sense of doubt is palpable. But after doing this for as long as he has, he doesn't like to make too many assumptions aloud, because as soon as he does, he's often proven wrong. Chelsea Sawyer, a tattoo apprentice from Salt Lake City, sent a message to My Fat Fabulous Life's Lennie Alehat on Facebook. Then, she was simply a fan of his art and wanted to be friends. When he actually replied, their relationship became much more. But where are Chelsea and Lennie now? For once, a case of celebrity crush-turned-serious relationship was actually the real deal.

Sawyer spotted a tender-hearted Alehat and his charming lumberjack's beard on TLC's My Fat Fabulous Life. At the time, she was on a weight loss journey of her own, at the end of which she lost over 200 pounds. Alehat was actually the boyfriend of one of the featured women on the show, and she appreciated how supportive he was of his girlfriend. After filming for the show ended, the two split, which is when Chelsea decided to send him a message.

She knew he was an artist, which she enjoyed because it's something they have in common. After exchanging a few messages, he gave her his phone number, and then things got serious. The two communicated every day for over a year and talked about everything from marriage to children to a cross-country move. Alehat was based in North Carolina, bu he said he would take the jump to be with Sawyer.

That said, the tell-tale signs of a catfish were definitely present. He often made excuses for not following through with visiting, and he never wanted to video chat. They also promised to exchange painted portraits of one another, and after whipping one up for him, Sawyer never received one in return. Until she met him in person, that is.

Knowing that the Facebook page Sawyer contacted was a fan page for Alehat's art, Nev leaned toward the possibility that someone else was running the profile. Upon further investigation, the signals were too mixed to make a concrete conclusion. Nev made the phone call asking Lennie to meet, and although he was hesitant, he obliged.

That's when one of the rarest occurrences on Catfish came to fruition. A nondescript Uber or Lyft crept up to the park bench on which Sawyer and the crew waited, and out stepped a familiar red-bearded face. Alehat was real, and he had some explaining to do.

Sawyer's final attempt to meet him and make things official was, initially, her calling his bluff. He never thought she would go to such lengths to meet him. When she realized he wasn't serious, she resolved to the fact that she had real potential with a guy back home, and was glad to be just friends with Alehat. That is, until she returned home after filming and informed Nev and his guest co-host, Tallulah Willis, that they had been talking again. And this time, it was real. He planned to visit her in Utah that month.

So, as of the post-filming follow-up, the two were an official couple. But neither of their Instagrams or Facebooks currently feature photos of them together. And Sawyer recently shared a Facebook post that reads, "Relationship status: sleeping in my bed diagonally." But that could be just a joke. They do still follow each other on social media, and in October, Alehat shared the portrait he finally got around to painting for Sawyer.

She didn't comment on the photo, but gave it a like, which probably has a secret meaning in today's world of social media communication. Then again, who knows, they could be saving the news for a big reveal post-episode. Or, they could be just friends again. Regardless, their story had a better ending than most Catfish hopefuls, which is something worth celebrating.