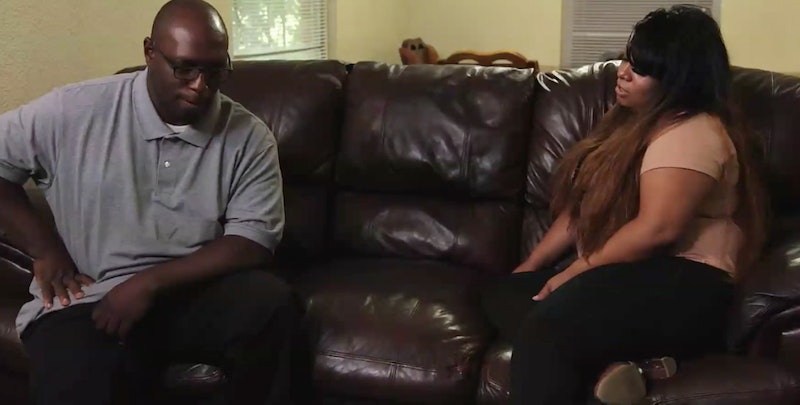 Surprises, betrayal, and ultimately, hope, are something longtime Catfish viewers have come to expect out of the reality show's tumultuous weekly hour. For a program centered around the tendency of people to lie on the internet — whether out of insecurity, spite or something entirely different — you can't help but feel a sense of redemption, growth and possibility when the end credits roll. In the Catfish Season 7 premiere this week, that's especially true, and, at the end, things are looking up for the latest would-be couple. So, what are Catfish couple Sheklia and Terrance doing now?

Unfortunately for all of the saps like me who are always hoping for a happy ending, it doesn't seem like that happened here — at least not for the two together. A look at what seems to be Sheklia's social media accounts shows not only feeds, photos and pages decidedly absent of Terrance, but filled with brand new baby pictures as well. Whether the baby is Sheklia's child is somewhat unclear, but she certainly does appear to be lovingly doting on the adorable little guy. The man holding the baby in a photo or two of hers is also definitely not Terrance. Sheklia has started to advertise her episode of Catfish on Instagram and Facebook, asking friends and family to tune in. However, it seems clear that she didn't (or at least now doesn't) take the results of the episode too seriously.

"Hope you [enjoy]," she wrote in a comment to her original Facebook post about the show. "It was just for fun [and] nothing serious." In June of this past year, Sheklia also updated her profile picture to a photo of her and another man, with hearts surrounding the frame. While we don't know for sure when filming for this episode concluded, it seems clear that Terrance is no longer her main squeeze, though her Facebook does note that she's in a relationship.

Sheklia keeps most of her social media public, while Terrance, on the other hand, seems remarkably more difficult to find. This could be because he has a much more common name than Sheklia, and without his last name readily available, he's simply harder to track down. It's also probably because — despite my knack for diving into internet rabbit holes after looking up old high school classmates — I'm no professional sleuth like Nev or Max. Wherever Terrance is, though, it seems apparent that he's there without Sheklia.

This is particularly heart-wrenching because of just how downright bananas the two's relationship appeared to be on the show — it seemed like fate was dying for them to end up together. As was revealed in the final third of their Catfish episode, Terrance and Sheklia actually dated for several years about 11 years prior to the Catfish crew reuniting them once again. They were actually catfishing each other, both using fake photos and names while talking to someone they thought was real, and it just so happened that the fake profiles they stumbled upon were each other's. I mean, come on. What are the odds that of all the people for these two to interact with through a fake profile online, they would both unknowingly choose the one helmed by the ex they left behind more than a decade ago?

Where is Spielberg? When will this screenplay be written? I will drop an irresponsible amount of money to watch this drama unfold over two and a half hours on a movie screen today. Sadly, though, no matter how astonishing the coincidence or sentimental the episode, it seemed that the relationship between Sheklia and Terrance was simply not meant to be. Despite the fact that when Catfish checked up on them two months after filming wrapped, the pair seemed like they were working things out, and even visiting one another, it doesn't seem like that is something that's maintained today. Sheklia, at least judging from her posts, is happy, no matter who she's with, and we can only hope the same is true for Terrance.

For all their faults — lying about their appearances, the apparent mistakes each of them made in their ages-old relationship — Sheklia and Terrance both genuinely appeared to want to cultivate healthier, more honest relationships. And in the end, that's what Catfish is really all about.

More like this
All The Clues Gillian & Edgar Are Still Friends After 'Temptation Island'
By Brad Witter
What’s New On Netflix: 'Stranger Things' & 'Somebody Feed Phil' Return
By Arya Roshanian
What’s New On Netflix: A Victoria Justice Rom-Com & The Return Of David Letterman
By Arya Roshanian
Marissa Has No Regrets About Her 'Temptation Island' Romance With Edgar
By Brad Witter and Kadin Burnett
Get Even More From Bustle — Sign Up For The Newsletter