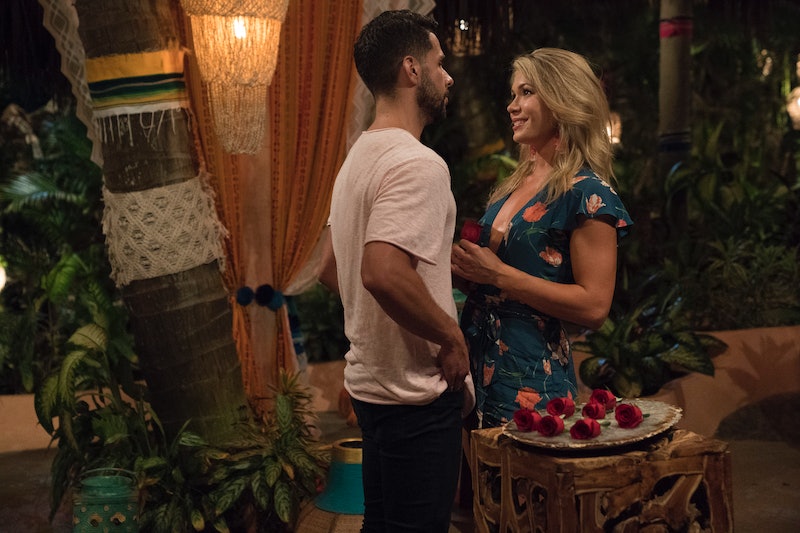 One of the most unlikely pairs that's come out of this season of Bachelor in Paradise is that of Chris and Krystal. Neither of them made particularly good impressions when they first appeared in the franchise, but together in Paradise, they might have created something lasting. So as the season comes to a close, it's time to figure out if Chris and Krystal are still together after Bachelor In Paradise.

Their social media accounts are obviously void of any juicy details we couldn't otherwise glean from the actual show — they're not allowed to flaunt any relationships that may or may not have endured past the show because the show won't want spoilers to reach fans. But their commentary still could be telling. Krystal did share a snapshot of their most recent date, saying that dancing with him felt "magical," and affectionately called Chris "Goosey." And Chris just a photo with Krystal as his "#WCW," and asked fans if they're "Team Christal." He also posted saying he hoped the show began to better show "how real our relationship is" on the show.

As if that weren't enough reassurance for people rooting for their success, Chris even said their date on the latest episode was "A night I’ll never forget. A night where I looked in your eyes and saw nothing but love and a future. Let’s see where this goes...."

They're definitely not shy about sharing memories of their time on the show, even if they neglect to say how exactly it ends, but ff things went down in flames, you'd think they wouldn't be speaking so affectionately of each other right now, even in an effort to promote the show.

As of the most recent episode of BiP, they definitely seem like they could be on the path to get engaged. They danced the night away, and told each other that they were in love with each other. It's a situation that nobody anticipated, but Krystal and Chris are actually kind of the most stable couple in Paradise, aside from maybe Kevin and Astrid.

If we're all being honest, neither Chris or Krystal made a great impression on their respective seasons of The Bachelorette and The Bachelor. Chris had a super bad vibe with Becca and came off as pretty controlling and rude. He was angry that he didn't think he had enough time with Becca and seemed to villainize her for simply spending time with the other guys, and ultimately he was sent home after walking to her hotel room in the middle of the night. Even earlier this season, Chris raised eyebrows when he started gaslighting Tia and walking back statements he'd made to her.

Krystal didn't reach the villain heights that Chris did on her season with Arie, but she definitely didn't get along with the other girls, and butted heads with Arie himself on multiple occasions. Unseen footage that ultimately aired during After The Final Rose also appeared to show her using some pretty unsavory language to describe Arie and the rest of her castmates, and it rubbed a lot of people the wrong way.

On BiP, Krystal has chilled way out since her first stint in the franchise, even though Chris definitely still has his issues. But hey, you never know what can happen when you get these many personalities together on the romantic beaches of Mexico. Chris and Krystal very well could pull this whole thing off for real.