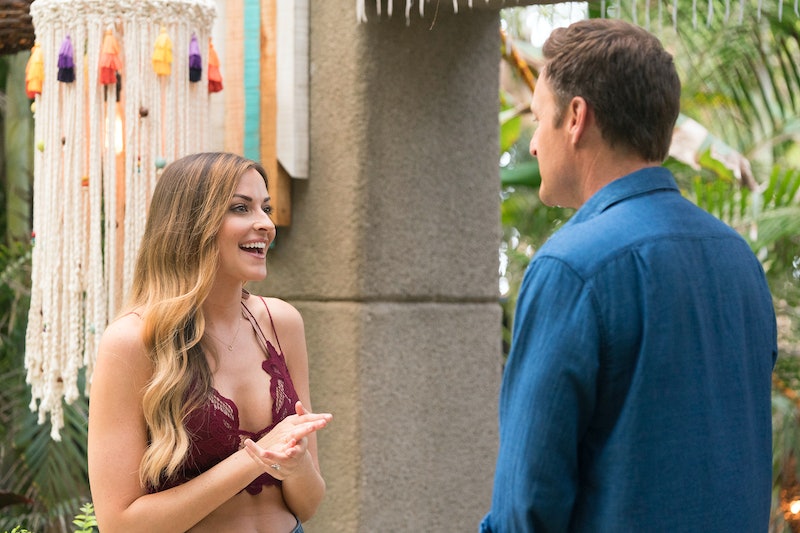 The beauty of Bachelor In Paradise is that the cast members get to to date a bunch of people from The Bachelor and The Bachelorette. For instance, Tia really came into Bachelor In Paradise to be with Colton, but she ended up going out with Chris R. first. And she really liked him (really!). And Chris was all, "You're my number one here, I like you a lot, I won't take a date with anyone else." It seemed like he meant it, too, until he was caught making out with another Bachelor In Paradise contestant, Krystal. As soon as she heard about their makeout session, from Colton, no less, Tia confronted Chris on Bachelor In Paradise about it. Instead of being upfront with her, though, his response was pretty much the textbook definition of gaslighting.

According to Psychology Today, gaslighting is "a malicious and hidden form of mental and emotional abuse, designed to plant seeds of self-doubt and alter your perception of reality. Like all abuse, it's based on the need for power, control, or concealment." Chris pledged allegiance to Tia and then made out with Krystal, and Tia, not wanting to be made a fool of again on national television, was like, "if you're not into me, you don't have to be. Just don't lie." Instead of admitting that he was just trying to work the beach and guarantee a stay in Paradise, Chris doubled down and told Tia that he was still just for her. Wait, what?

This is when we all entered The Twilight Zone, because Chris told Tia that while there was a moment with Krystal, it doesn't change anything about what he told Tia. Wait, it gets better — when Chris tried to dance around it and Tia said that she was just stating the facts, Chris said, "There are no facts." No facts? Get this man a job in the White House! "What are you talking about," he said. "You're making no sense!"

This is a textbook case of something called "getting caught in a lie." Chris likes to pretend that he's all high and mighty and writing articles about how pleasing a woman is his number-one goal, but when it comes down to it, Chris is good for Chris. Chris has very specific ways in which he thinks women should interact with him — remember on Becca's season of The Bachelorette when he was incensed that she spent time with other men and then demanded 1,000 kisses? It was her show, and he was mad he wasn't the center of attention.

And it's the same thing here — Chris made promises to Tia that would make him in the center of the Colton/Tia drama, and when they weren't working to his benefit, he dropped out to make sure there would be another woman behind Tia. If I were Krystal, I would run for the hills, because Chris is about Chris, and his gaslighting Tia (also, guy, everything you said is on camera, so what's to deny?) is at worst manipulative and at best just mean. And it's totally going to happen again. All of the women on Bachelor In Paradise would do best to move on from Chris and let him go home solo — it's his worst possible outcome, it seems, but it's the one he needs the most.