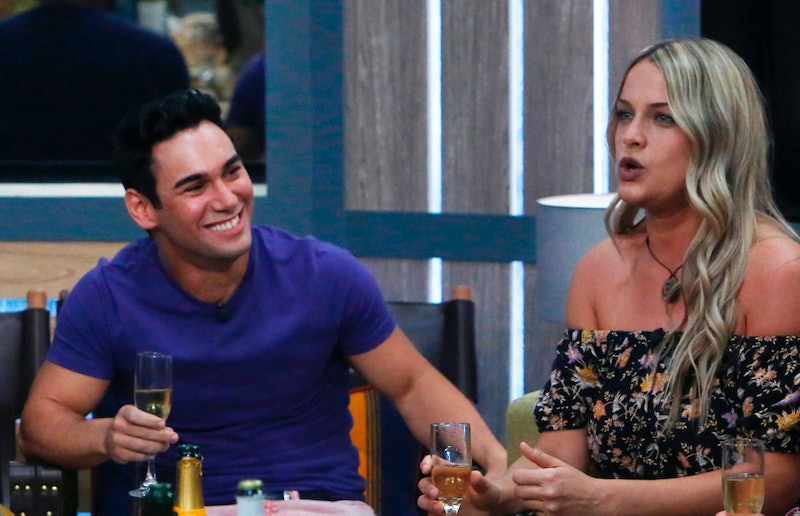 It's not unprecedented for people who know each to end up in the Big Brother house at the same time, but it's been a while since a relationship as complicated as Christie and Tommy's has been featured on the show. BB21's Christie and Tommy aren't friends outside of the house in the sense that they catch up or hang out, but rather they're on two separate sides of what sounds like a pretty transformative breakup for Christie. The two Staten Island residents know each other through a family member of Tommy's, but that connection recently soured.

According to Tommy and Christie's diary room sessions in the Big Brother premiere, Christie previously dated a member of Tommy's family — and it's possible that this was the seven-year relationship that Christie got out of prior to appearing on the show. Obviously, the two have met, as evidenced by an Instagram photo of Tommy and Christie from 2015. But while there may be some complicated history between them, the two have said it's too valuable to their Big Brother game to not use their connection to form a secret alliance.

"We liked what both Tommy and Christie brought to the show as individuals," Big Brother Executive Producer Alison Grodner recently told Entertainment Weekly. "We knew that they had a past together and decided to see how that would play out in the house."

While casting two people who know each other adds an interesting dynamic to the season, Grodner further clarified in an interview with Carter Matt that the two "truly had no idea the other person would be there." The fact that they were surprised by each other's presence seems to be a clear indicator that they're not close friends outside of the house, and that their only connection was through Tommy's relative that Christie dated.

However, just because they're not friends outside of the house doesn't mean that they won't become friends — or at least work together — while on the show. In a house filled with strangers, even the most basic of connections becomes valuable, and the fact that Tommy and Christie have some shared history could be helpful not just for their Big Brother gameplay, but also in grounding them while isolated from the outside world.

Big Brother fans tuning into the live feeds have already gotten to see some of Tommy and Christie's partnership play out, with Christie telling Tommy the intel she's gathered from her six-person alliance with Nick, Jack, Jackson, Bella, and Holly. Tommy, in turn, has been working to collect information from outside of that alliance, making he and Christie the two most well-informed people in the house right now.

So while the ending of a relationship may have taken Tommy and Christie out of each other's lives, Big Brother not only brought them back together, but put them into a situation in which their best chance at success is relying on one another. And in the end, that could win them the grand prize.