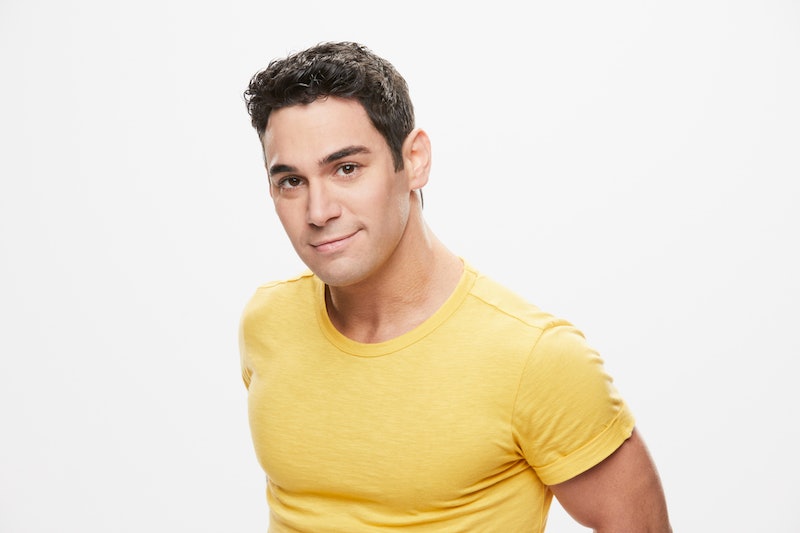 It's officially time to get to know the new cast members entering the Big Brother 21 house, like Broadway star Tommy Bracco. The professional theater dancer is also a huge Big Brother fan. He thinks his outside experience both in the Broadway world and in his personal life make him the perfect fit for the show.

"Building a new musical is a lot like being in the Big Brother house," Tommy said in a CBS video interview ahead of the premiere. He would know, too. According to Playbill, Tommy played the bellhop Giulio in Broadway's Pretty Woman, and he also appeared in Newsies The Musical as well as the off-Broadway performances of A Chorus Line and The Hairy Ape.

He described theater life to CBS as very similar to the BB house. "You're in a cast with different [people] ... and you have to work together," he said, adding that he's eaten, slept, cried, and worked alongside his Broadway cast members to the point that they've become family. "I feel like I've been playing Big Brother for the last 10 years of my life being a theater performer."

Of course, the Big Brother cast isn't really designed to feel like family — this is a competition. But Tommy is still going to try his darnedest to make the family angle his strategy. In an interview with ET Canada, Tommy said he thinks that his social game and in-house relationships will be his strengths. He said he wants the cast to view him as "the Italian mother of the house ... so that they don't think that I'm the one to backstab them."

Tommy may even already have an advantage, because he's met one of his fellow contestants before. As Hamsterwatch pointed out on Twitter, Tommy has an Instagram photo from 2015 that shows him at dinner with a group of people — including fellow BB contestant Christie. "I LOVE MY FAMILY MORE THAN ANYTHING!!!!!!!" he captioned the photo. (Tommy's Instagram is currently set to private, but Bustle was able to verify the existence of this photo on his timeline.)

It'll be interesting to see how Tommy and Christie approach this connection on the show. Will they pretend not to know each other? Tommy has thought a lot about strategy, but may not have been expecting to have someone he knows in the house, and there are a few other things that could lead to his undoing.

In his CBS video interview, he said he plans to throw competitions until halfway through the season so the other houseguests don't see him as a threat. However, he may not be able to hide it. His time as a dancer has made him pretty physically fit — and the BB contestants love to evict physical threats. (He's the one in this Newsies shot pumping both his fists in the front row.)

Plus, while a family approach may be Tommy's winning strategy, it could just as easily be his downfall. He said in his CBS bio that some of his favorite activities include: "Eating Mom's cooking" and "playing [the board game] Catan with the family." He won't be able to do either during his time on Big Brother, and he said family will be part of what he misses most while secluded in the house.

For his sake, hopefully Tommy will stay focused, but you can't blame the guy if he gets homesick. And if he does get evicted early, at least he'll be coming home to a family he loves. You might call that a win-win.