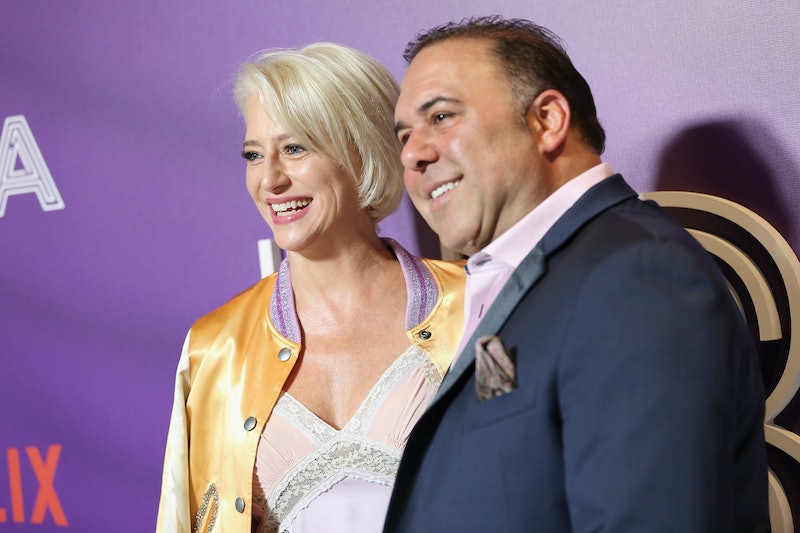 After over seven years together, Real Housewives of New York star Dorinda Medley and John Mahdessian have broken up, according to a clip shared by the Daily Mail ahead of the May 14 episode. "The break up with John is sad... but I also know that I have to do what's best for me," Dorinda explains in the video.

According to a report from Page Six that Dorinda mentions on the show, the split happened about eight months ago, in September 2019. "They're starting to live separate lives," a source (which Dorinda speculates was her castmate Ramona Singer) told the outlet. This came after another Page Six report in May 2019, in which Dorinda said that John was hurt she'd said she was "too old" to get married. But she stood by her comments. "I think marriage is for young people, because you want different things. You want children, you want a home together, you want to grow in a certain way. I've seen and done that twice," she said.

Dorinda was married to Ralph Lynch, with whom she shares her daughter Hannah, for 10 years; her second husband, Richard Medley, died in 2011. She started dating John before she joined RHONY in Season 7, and many of the other Housewives didn't understand their dynamic. In Season 11, Dorinda finally bought a new apartment, and her castmates were shocked to find out that not only did John not live with her, he kept barely anything at Dorinda's home. Her excuse was that she didn't want John's stuff around, but in hindsight that careful separation was likely the first step to their break.

In the Daily Mail clip, Dorinda explains that there "was no big fight" and that she'll "always love John," but that her priorities have simply changed. "I have to do what’s best for me now and I realize that my expectation levels have grown,” she says. “This is what I want now, this is what I need. And I need to find the right partner that's willing to be engaged in that. And I don't think that's bad. I think that's honesty."

This article was originally published on June 19, 2019