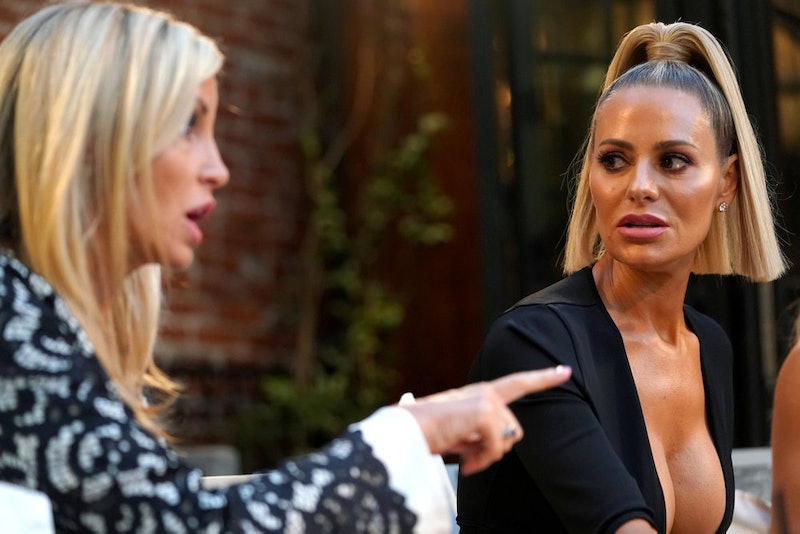 There's been some ridiculous drama over the years on the Real Housewives, but none so ridiculous as the current storyline over on Real Housewives Of Beverly Hills — the rest of the cast alleges that Lisa Vanderpump set up Dorit Hemsley to be publicly humiliated because Dorit got a dog from Lisa's dog shop and then gave it away. While it may seem silly, this dog drama has opened up some cracks in even thr tightest of friendships, and if those solid ones don't stand, then it's no wonder that Lisa and Dorit aren't friends in 2019, long after filming ended on this season of RHOBH.

Of course, it's not just about the dog, who is named Lucy Lucy Apple Juice (it really bothers me that the name is not Lucy Lucy Apple Juicy, because it would rhyme and be cuter). The deeper issue, according to Teddi Mellencamp, Lisa Rinna, Camille Grammer Meyer, and the rest of the cast, is that Vanderpump has been quietly manipulating drama since Real Housewives Of Beverly Hills started, but she does it in a manner that never makes her look like the bad guy.

The Lucy Lucy Apple Juice saga is just another example of this, and the women of Real Housewives Of Beverly Hills are just sick of it.

At the center is Dorit and Lisa, who were pretty good friends before this all happened — Lisa and Ken knew Dorit's husband, PK, from their swinging London years. But their current relationship must be sour, because Dorit has no pictures of she and Lisa on her Instagram save for publicity shots from Bravo — they're not hanging out unrelated to the show at all. In an appearance on Watch What Happens Live, Dorit said that neither she nor PK are on speaking terms with Lisa. "PK and I go through everything together. I'm not speaking to her, neither is he," Dorit said.

Lisa must not be speaking to Dorit or any of the other housewives, for that matter, because Lisa hasn't posted anything about her fellow Housewives at all since 2018. Lisa has more recent pictures with former *NSYNC star and wannabe astronaut Lance Bass than she does with Dorit or Kyle or any of the other Real Housewives Of Beverly Hills women. According to Entertainment Tonight, Lisa also skipped out on filming any group events with the other women for the rest of the season.

Lisa has continuously denied any involvement in this setup, and in an interview with Entertainment Tonight, she said that it all got blown out of proportion. "It just goes on and on and on," she said. "And it's a shame, really. Because the focus was on the dog. The dog's fine now. and I think it all got very convoluted. I haven't seen it, but I don't like what I'm hearing." Yikes!

For now, it's obvious that it's not Lisa versus Dorit — it's Lisa versus the rest of the cast. And while that can be isolating for Lisa, there is a reason she's alone. For now, all we can do is wait... for the reunion.