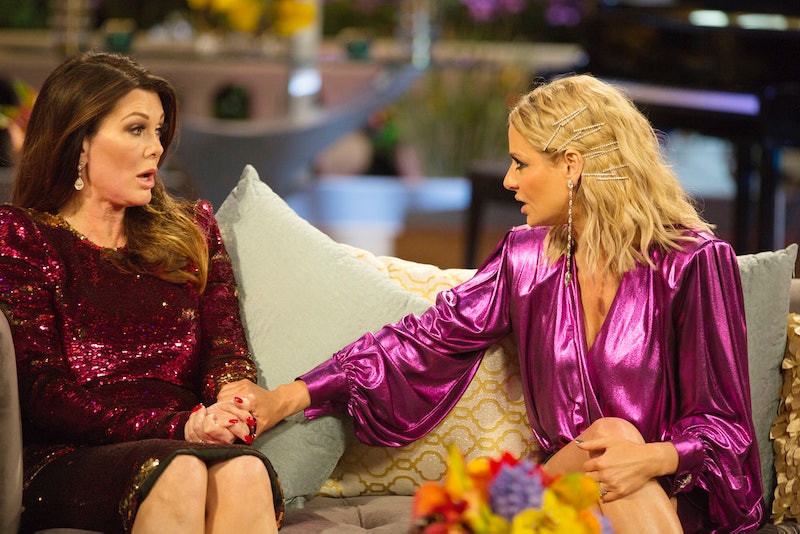 Dorit Kemsley joined Real Housewives of Beverly Hills as Lisa Vanderpump's friend in Season 7. They supported each other that year, but there were cracks in their friendship during Season 8 and after a failed adoption, Season 9 has started off with them on the rocks. But let's go back to the start, since Dorit has been fretting about losing such a good friend. So how do Lisa and Dorit know each other and what is the origin of their now-floundering friendship?

During their on-camera interviews from Season 7, Lisa and Dorit told the story of how they met. Lisa began, "I met Dorit at a wedding of a very good friend’s daughter’s." Dorit had a much more detailed explanation. Dorit shared, "She walked into the bathroom, I was having my hair done and I turned around and she said, ‘Darling we’re on an island you don’t have your hair done.’ I said, ‘Lisa this is what I do, I have my hair done, my makeup done, I always like to look nice.’ Lisa followed by saying, ‘Bless you. You can do it on your own, I need to have it done.'”

Even as an OG cast member, Lisa just never got on board with the glam squad trend that Dorit and Erika Jayne bring to RHOBH. With that said, Lisa poking fun at Dorit for getting her hair and makeup done during their first conversation ever is not-at-all surprising.

Lisa still does that to this day. She even told Dorit that she looked just like Lisa's dog Schnooky while she was getting her hair done during the Season 9 Bahamas trip.

In that same 2016 clip, Dorit said, “Lisa Vanderpump and I ended up having an incredible weekend full of laughs and I kind of quietly fell in love with her at that moment." There's no better place to find love, even friend love, than at a wedding.

Before Lisa and Dorit formed a friendship of their own, Lisa was friends with Dorit's husband PK Kemsley. In fact, Lisa made it clear that her close bond with PK serves as the foundation of her bond with Dorit during a Season 8 cast trip to New York City.

In the middle of a tiff, Lisa told Dorit, "I love you — mainly on the strength of loving your husband and wanting to love you and make it right." So is that a compliment or an insult? During her on-camera interview, Dorit admitted, "That hurts." She even remarked, "I thought we have a far better relationship than that." Apparently not.

It's not really clear how PK and Lisa know each other, but in a March 2018 appearance on Daily Pop, Dorit discussed the longtime friendship between Lisa and PK. She shared, "Lisa and I have a great friendship, but I've only known her a short amount of time compared to how long she's known my husband—and they go way back. And all of their friends have known each other for, like, 30 years."

So what's the status of Lisa's friendships with PK and Dorit today? During a February Watch What Happens Live With Andy Cohen episode, Dorit admitted her strain with Lisa affected PK's relationship as well. She shared, "PK and I go through everything together. I'm not speaking to her, neither is he."

Maybe the three of them will reignite their friendships during the Season 9 reunion taping. Or maybe they can truly start over and Lisa can walk in while Dorit's glam squad gets her ready and poke fun at her for getting her hair and makeup done before they start filming.