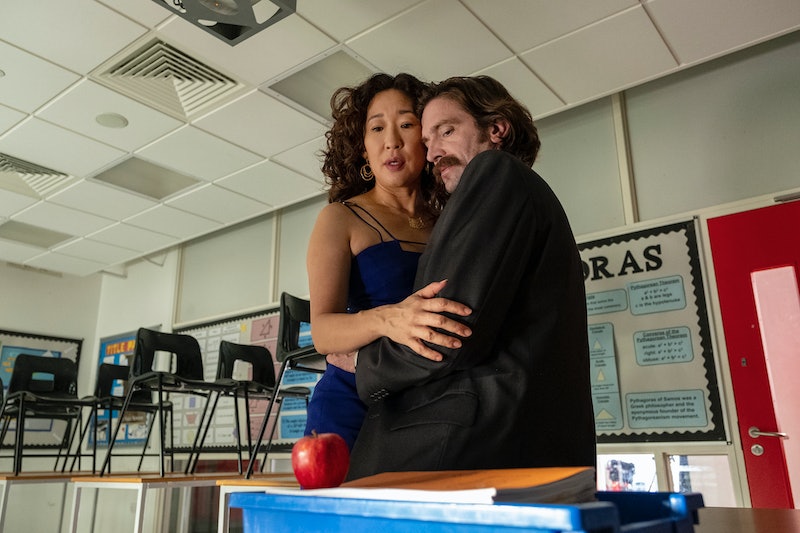 It's kind of hard to say who's caused more trouble for who on Killing Eve. Villanelle might technically be the assassin, but she and Eve spent all of Season 1 disrupting each others' lives in strange and unprecedented ways. If you were to ask Eve, though, the answer is clear. In Season 1 Episode 8, Eve confronts Villanelle, claiming, "I've lost two jobs and a husband because of you!" Wait a minute — does that mean Niko and Eve aren't together anymore?

The two are clearly estranged — and honestly, who could blame them for having problems? Eve is bordering on Walter White-levels of nefarious secrecy, and Niko is kind of being a buzz kill.

At the start of the season, the pair were clearly in a happy, loving, comfortable relationship. But as Eve started to sink deeper and deeper into Villanelle's world, the couple began to drift apart. Calm and sensible Niko isn't all that understanding of Eve's dangerous side.

The last we saw the Polastris together was in Episode 6, "Take Me to the Hole!" In it, Eve met up with Niko while he was smoking outside the bridge hall. Niko confronted her with the newspaper detailing Frank's murder, then asked her how many people are going to die. An enraged Eve slapped him across the face.

Niko started to walk away from her, but then decided to calm down and asked to put the fight behind them and get some food. Eve said she couldn't, though, as she was on her way to Moscow.

Later in the episode, she called him and hung up without leaving a message. In Episode 7, she called him again and left a message imploring him to let her see him when she gets back, and giving the sense that she's been persistently trying and failing to get in touch with him.

That was the last we heard about Niko before Eve told Villanelle she "lost a husband." But it doesn't look like she's lost him for good just yet. Press photos from Season 2, Episode 3 show the she and Niko looking very much like a couple. And in one of the promos for Season 2, Niko arrives at his and Eve's place, demanding to hear her story about what's been going on. "So," he asks, "are you going to tell me what's going on? Please?"

Some fans think they've already figured out what's going between Niko and Eve. There's a popular fan theory that Niko is a secret agent, too. However, in an interview with Entertainment Weekly, Sandra Oh seemed skeptical. "I gotta tell you, if that was true, Eve is so deluded," she said. "And also it kinda ruins the whole love [between her and Niko]. I'm gonna say no on that one. I'm gonna say [*thumbs down*]."

Whatever is going on between this husband and wife, it definitely looks like their relationship — whether it's being built back up or unraveling completely — is going to be one of the main focuses of Season 2.