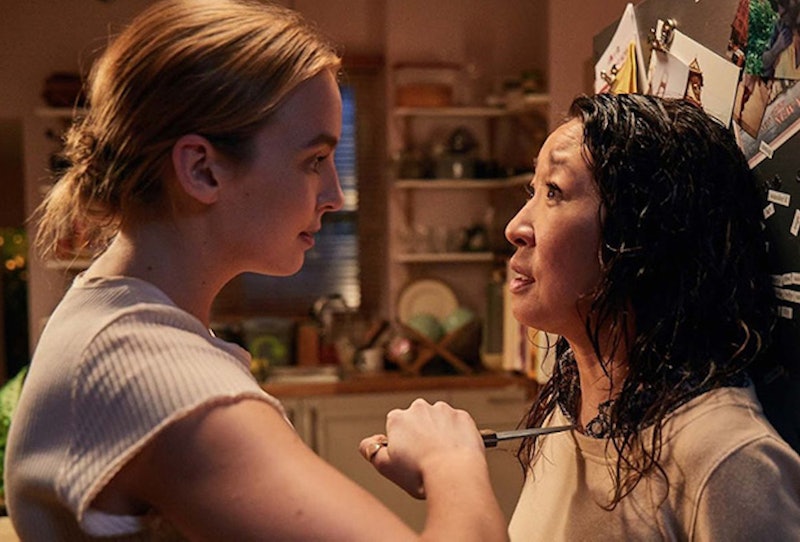 Forget about Santa, it's Sandra Oh that's given us the best present of all: a few Killing Eve Season 2 details that are bound to get fans excited for the new year. Going by what Oh said in a new interview, it's bound to be a wild ride that might leave everyone a little worse for wear. Though, whatever Villanelle is wearing will obviously be as chic as ever.

"It moves from a chase to being together — in the same room," Oh told The Hollywood Reporter in a Dec. 20 interview. With just that one comment, she's instilled a bit of fear in anyone who worries what assassin Villanelle (Jodie Comer) might do to Oh's MI5 intelligence officer Eve Polastri in that room. Let's guess it'll be more than just assessing her fashion sense and eating another one of Eve's home-cooked shepherd's pie. "For me," Oh says, this season "just gets so much more psychological."

Oh's currently filming the new season of the BBC thriller, which is now streaming on Hulu for your holiday pleasure, in London and says answering questions about what's going to happen on the show is still a little weird for her. "It's trippy talking about it while I'm still in it," she says, "but these characters have established that they know who the other is. It just gets deeper and deeper."

Fans are obviously willing to dig right into this psychological thriller since it's the fans who helped get this second season made. When the show, written by Fleabag creator Phoebe Waller-Bridge and based on Luke Jenning's Codename Villanelle novella series, debuted overseas it was with so much fanfare that it was hard to believe it wouldn't get renewed for another go 'round or two. And it was, pretty quickly being that the second season was announced before the first eight episodes even premiered on BBC America.

Killing Eve Season 2 will premiere next year, but in the meanwhile, fans are taking some inspiration from Eve and doing some reconnaissance work of their own. They're particularly interested in a very spoiler-y photo from the Killing Eve set that shows Villanelle with a certain character from the first season who's supposed to be dead. No spoilers here, but it's safe to say Villanelle still has some tricks up those haute-couture sleeves of hers.

Comer and Oh will be back for Season 2, but Waller-Bridge has handed over her writing duties to Call The Midwife's Emerald Fennell. Sherlock's Andrew Scott will also be joining Killing Eve, according to Variety.

While that's about all the details fans are going to get for right now, this season is going to have to delve into the show's biggest question: Who are The Twelve, the mysterious group that hired Villanelle? Also: What side is Carolyn (Fiona Shaw), the head of MI6's Russian desk really on? And oh, let's not forget there is the matter of how Villanelle's doing after being stabbed by Eve.

For now, fans are left with more questions than answers, but based on the clues Oh has shared, it's clear our brains are going to be working overtime from now until the Season 2 finale.