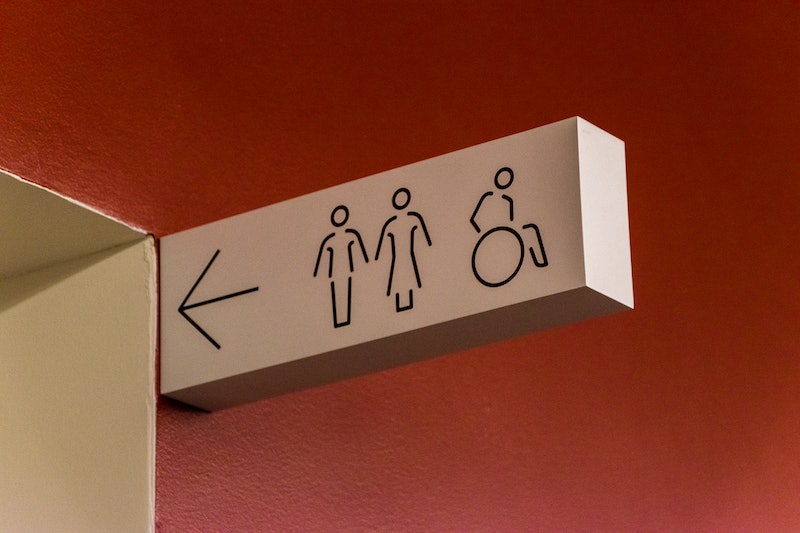 Everywhere you look, you'll find at least one example of sexism. But the one thing that's guaranteed to rile any woman is how goddamn long the queue is for public toilets. If you're at, say, a festival, scheduling your toilet breaks is vital if you don't want to miss your favourite act. The same goes for any event where timing matters. So when a company recently unveiled a new urinal design for women, it's no wonder that plenty were intrigued. The question is: could this female urinal be the future of women's toilets or just another short-term gimmick?

Lapee — a company created by architects Gina Périer and Alexander Egebjerg — claims to have designed "the world's first industrially produced female urinal," reports the Guardian. The construction, which is designed for festivals and can hold three women at a time, comes with a raised "hole" to make aiming easier and, although there are no doors, its spiral design ensures users' privacy. A Lapee user who stands, however, can see over the top; an unnerving prospect for those who don't want to make eye contact with others while weeing.

"I don’t think it’s that complicated to make a urinal for women. I just think it was something which was designed by men and they only thought about themselves," Gina Périer told the paper. According to Lapee, the urinal is 600 percent more efficient than a traditional cubicle, taking just 30 seconds to use versus three minutes.

It was recently unveiled to the public at Denmark's Roskilde festival. One 18-year-old told the Guardian: "You need to be a little bit drunk to do it if you ask me." But her 19-year-old friend was a more positive, saying: "You know, when you’re drinking you have to pee all the time, and last year all the girls had to pee in front of everyone or wait for half an hour, so it’s very nice."

Although Lapee's urinal was designed primarily for outdoor events like festivals, it's possible that the concept could mark a new era in women's toilets. Currently, women who just need a wee must still wait in line for a cubicle, unlike men who are free to quickly use a urinal. It's this that makes toilet design unfair on women even if male and female spaces are similar in size.

Yes, the technical specifications are often equal, but the addition of urinals to male cubicles means more men can utilise the area. Even public health experts recently argued that there should be two female toilets to every male one, reports the BBC. But, as The Atlantic explains, developers are unlikely to listen because toilets don't make money. (Unless you're forced to pay for them, but let's save that criticism for another day.)

So what's the solution? The two-decade-old Shewee is, if not used correctly, an accident waiting to happen, gender-neutral toilets are another option, but, although they promote much-needed inclusivity, many trials haven't got it quite right. As the Evening Standard reports, the Barbican Centre's gender-neutral designs still included a room full of urinals, allowing men to take up two spaces instead of one.

Female-focused urinals may not solve every problem, but they're a start. If designed correctly, they could take up minimal space while giving people the privacy and safety they deserve. Plus, they could severely reduce toilet queues and give women a better experience when out in public.

It'll take some getting used to, that's for sure. But what innovation doesn't?