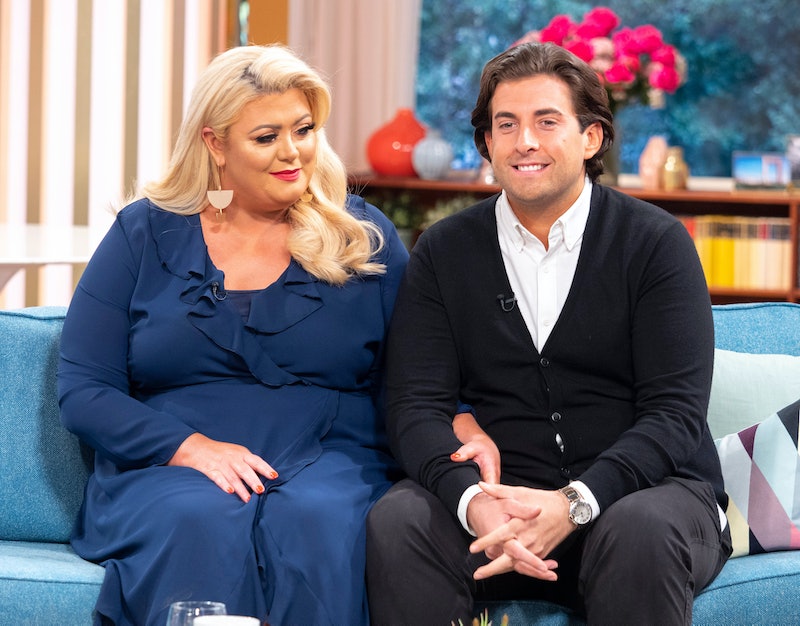 Basically all I want in this lifetime is for Gemma Collins to be happy. Since she's gifted me her world-class comebacks, countless memes, and that time she fell down a hole on national TV, it's the least I can do. She was first properly introduced to the world via The Only Way is Essex, which she starred in alongside her on-again-off-again boyfriend James "Arg" Argent. They've since made a name for themselves as one of reality TV's most iconic couples, but how are things with them now? Are Gemma Collins and Arg still together?

It would seem that they certainly are, though they are about to undergo some changes at home. "I’m actually moving from Essex," Collins told Lorraine Kelly at the National Television Awards on Wednesday, Jan. 23. In a pretty bold move, Collins confirmed: "I'm moving to Bovingdon this week, it's mine and Arg's last night together," the Mirror reports.

That's quite a lot of commitment for a reality-TV skating competition, but Collins is clearly very dedicated, and is adamant to stay. As it turns out, she's moving for the sole purpose of getting to be closer to the DoI practice space, according to the Mirror. Classic unpredictable Collins.

Arg confirmed that Collins was taking the competition very, very seriously, as he reportedly told Kelly on the red carpet: "She wants it to be all about the skating and the routines and less about anything else." Is that some subtle shade? Probably not. These two seem more devoted to each other, and more defensive of one another than ever.

Arg recently hit back at DoI judge Jason Gardiner on Twitter, after he criticised Collins in an article published in The Sun on Jan. 19, 2019. The headline was bound to rile up Arg, as it read: "Gemma Collins is lazy, mediocre and everything that’s wrong with entertainment, blasts Dancing On Ice judge Jason Gardiner." Yikes.

"Your [sic] supposed to be judging the routine & giving your opinion. Not slating a contestant who you’ve only just met, You haven’t given her a chance! It’s disgusting & unprofessional. She’s worked so hard & tried. What’s your problem!?" Arg wrote in his tweet. The article was followed by a live spat between Gardiner and Collins during the following weekend's show, when Gardiner also suggested Collins wouldn't be able to perfect her lifts on the ice because of her size, as The Sun reported on Jan. 21, 2019. The tone of his comments received wide criticism, with Denise Welsh saying on Loose Women that it was "fat shaming."

They're comments to make the very toughest contestant want to quit, but it's really a testament to Collins' resilience that she's going above and beyond to prove everyone wrong. I also think it's a testament to her relationship with Arg that he's supporting her wish to improve herself, even if it means not sharing a house together for the next while. These two are unstoppable together, and no one — not even Jason Gardiner — is going to get these two down.