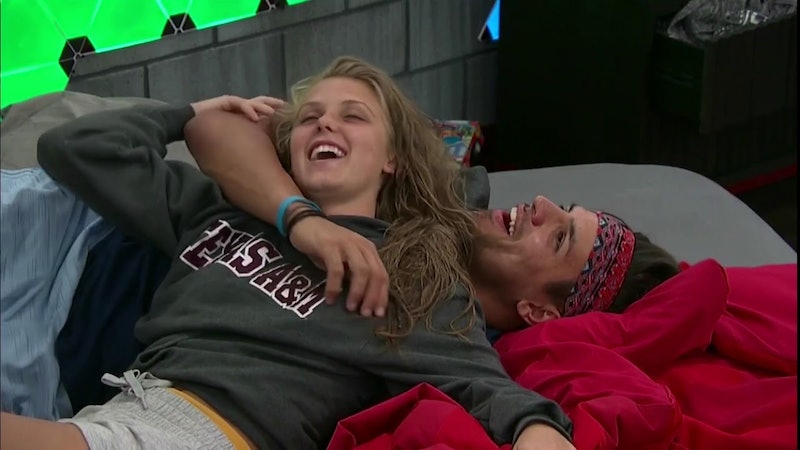 Big Brother has produced several lasting relationships in its 21 seasons, but admittedly, the fact that Haleigh and Fessy from Big Brother 20 are still together is kind of shocking. The pair almost constantly argued on the show and Haleigh was always very averse to a showmance with Fessy because she was focused on her game. (Fessy was more focused on Haleigh.) But, against all odds, the pair has managed to make things work even while being long distance.

In a November 2018 YouTube video, Fessy revealed that he had a lease in Orlando through May 2019 and Haleigh had one in Texas through August 2019. That meant they had to date from a few states away. But, they prioritized visiting each other so as to keep the spark alive. "What we've been doing is every few weeks, we book a flight so we know that no matter what, we're going to see the other," Haleigh told E! News about their relationship tactics. "That actually makes it better. You have something to look forward to."

Still, they don't want to be long distance forever. The couple told E! News that they're thinking about making a move together. "We want to just find a spot and build. Not a house, but build ourselves," Haleigh said. "We just want to enjoy life." As for where that spot might be? They're still deciding. "We're definitely looking for locations where we can thrive and use our platform to our advantage," Fessy said. Haleigh added, "We're looking at places so moving together would be optimal for us as a couple going forward."

In that November YouTube video, Haleigh revealed that she is looking to apply to PhD programs for psychology, which means she could be moving away from Texas anyway. She said she needed to figure out what was happening with her education before deciding on where and when to move with Fessy.

But even though they don't currently live in the same place, that doesn't mean their relationship isn't serious. For their one year anniversary of meeting each other on the show, Fessy posted a lengthy Instagram caption expressing his feelings for Hay. He wrote in part:

"WCW ❤️I met this beautiful woman exactly a year ago tomorrow on a reality TV show ... a TV show where the object is to lie and cheat and do whatever you have to do to win half a million dollars. And what did I do instead.. Chase her around and try to get her to fall for me the whole time ... The reason this show does so good at forming long lasting relationships that end up with marriages and families is because none of this is forced ... 99 days is a longggg time to spend with someone ... That’s why feelings become so strong, a week in there feels like a month ... You really begin to genuinely care about the person they are. SO happy one year to you babe ... You’re the greatest thing that’s ever happened to me."

Haleigh may have wanted to play the game, not find a boyfriend, but she did both. And now that she's not playing the game anymore, she's free to build a future with Fessy that includes a PhD for her and a new home for them. That may not be a million dollars, but it's still a pretty sweet deal.