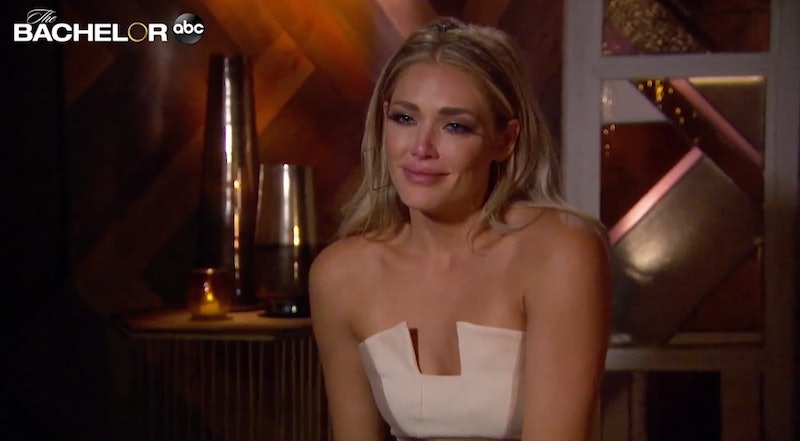 Following Peter and Hannah B.'s emotional reunion on The Bachelor, there's more drama afoot with a different Hannah — specifically, Hannah Ann and Kelsey. According to a preview clip posted by E! News for the Jan. 13 episode, Kelsey gets into it with Hannah Ann after Hannah and Peter pop the champagne that Kelsey specifically brought to share with Peter. Whoops. But while it may look intense in the moment, Hannah Ann and Kelsey are friends after The Bachelor. They're even making jokes about what they've now christened #ChampagneGate.

In early episodes of The Bachelor, there is always a lot of competition to get enough time with the lead and really build a connection. And if that time is interrupted by another person — well, it can lead to major drama. But it's a show, and a show that was filmed all the way back in September, so most of the small potatoes tension between the contestants has long since been relieved. That's certainly the case for the champagne battle that unfolds Monday night.

When Kelsey posted to Instagram to announce that she would be on the show, she captioned her photo, "Secrets out! Tune in on January 6th to watch the premiere of #TheBachelor on #abc! Heard it's going to be poppin' #Champagnegate#cryingiscool."

Soon, Hannah Ann commented, "We be poppin' this season #champagnegate ... #cheers to us." And Kelsey responded, "Cheers to us! Let the #Champagnegate begin."

Clearly they know this is going to be one of their storylines this season, and they're ready for it. They also don't seem to be too bothered with each other anymore. Both of them follow each other on Instagram and frequently like each other's photos. They also comment nothing but nice things. Hannah called Kelsey a "classic beauty" on one of Kelsey's selfies, while Kelsey complimented one of Hannah's modeling photos.

The biggest indicator that it's all water under the bridge was their interaction on Thanksgiving. When Kelsey posted a photo of herself for the holiday, Hannah commented, "Happy Thanksgiving ... Sending you a big hug!! XO." Kelsey then wished her one right back. "Happy Thanksgiving!!! I love and miss you like crazy!!!"

Sounds like they not only got over #ChampagneGate, but they're actually pretty close? That's not gonna stop Kelsey from making every champagne joke she can, though. She's taken to posting Instagram Stories about bubbly nearly every chance she can. "Saturdays are for the girls and drinking champagne," read the caption on one of her posts. On another one, fellow Bachelor star Kelley Flanagan took a photo of Dom Perignon champagne and captioned it, "Kelsey Weier is that you?" Kelsey reposted the photo and added, "Sadly I still never had Dom."

If she keeps all the jokes up, she'll definitely be handed a glass of bubbly on the Women Tell All as a reference to the (now long-forgotten) argument. And maybe Hannah Ann will even be the one to give it to her.

More like this
Hannah Ann Got Engaged 3 Years After 'The Bachelor' & The Proposal Was Dreamy
By Grace Wehniainen
Kaitlyn Bristowe Said Chris Harrison Ignored Her After Her 'Bachelorette' Hosting Gig
By Grace Wehniainen
'Bachelor' Fans Think Rachel & Clayton Are Dating After This TikTok
By Grace Wehniainen
Megan Mullally & Nick Offerman’s Relationship Includes Several Collaborations
By Caitlin Gallagher and Brad Witter
Get Even More From Bustle — Sign Up For The Newsletter
From hair trends to relationship advice, our daily newsletter has everything you need to sound like a person who’s on TikTok, even if you aren’t.