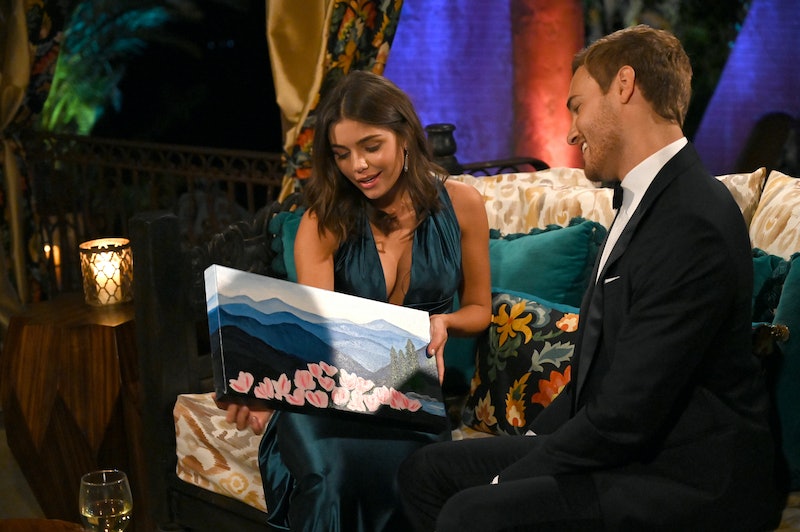 By the looks of her Instagram, Bachelor contestant Hannah Ann has a lot in common with the last Bachelorette (and Peter's ex), who just so happens to share her name: Hannah Brown. Though the majority of Hannah Ann's feed is focused on her modeling career (which has subsequently led to a friendship with yet another Bachelor Hannah), she also has a southern Christian background and is a former pageant queen. Considering those were some of the traits that helped Peter fall in love with Hannah B., that could make Hannah Ann a frontrunner. But because this is The Bachelor, her capital J journey to find love won't be without drama.

A preview for Peter's season of The Bachelor already sets Hannah Ann up to be the villain, with her stealing him not once, not twice, but three times during the first cocktail hour. That likely won't go over well with the rest of the women, but one episode of a heavily edited reality show doesn't exactly offer the fullest picture of who someone is IRL. Naturally, you'll also want to take a scan through her IG, a place that offers a more authentic and totally not skewed at all glimpse into her life. Here are six things it reveals.

When Chris Harrison announced Peter's contestants, he revealed that Hannah G. referred Hannah Ann to the show. (It's slightly similar to how Hannah G. knew Danielle Maltby of Nick Viall's season before going on Colton's season.) Hannah Ann's Instagram shows that they've modeled together since at least the summer of 2018, and ahead of Colton's Bachelor this time last year, Hannah Ann wrote she couldn't wait for Bachelor Nation to "fall in love" with Hannah G., "the sweetest / goofiest southern belle you could ever meet!"

While Hannah G. called herself a "social media influencer," Hannah Ann listed her job as model in her ABC bio. Fittingly, that's what most of her Instagram is dedicated to.

While many members of Bachelor Nation make money from Instagram promotions, the 23-year-old started modeling years before she wound up on the show. She was featured in ads for a cheerleading apparel company back in 2012, and has since been on a cover of a book, in a Sonic ad, and in a national ad for Vanity Fair lingerie (above). More recently, she was in a shoot for Khloé Kardashian's brand Good American.

She Has Pageant Roots

Like Hannah B. and Caelynn Miller-Keyes, Hannah Ann participated in pageants before coming on The Bachelor. Hannah's hometown is listed as Knoxville and she participated in Miss Tennessee USA in 2017, where she was the fourth runner-up. Her time doing pageants also led to some charitable work, as she spent time volunteering with the Miss Amazing organization, which focuses on building self-confidence in young women with disabilities.

She Had A Longterm Boyfriend

Years before she decided to pursue Peter, Hannah was in a committed relationship. In July 2017, she called her boyfriend her best friend, and in December 2017, she posted that they were together for four Christmases. But since a New Year's Eve post in 2017, he's been absent from her feed. Her Bachelor bio notes her last relationship was "all chemistry but little friendship," but it's unclear if that's referring to him or a more recent boyfriend.

She Doesn't Have A Fear Of Flying

While Peter's season may not have the "On the Wings of Love" theme that Jake Pavelka's season had, there will probably still be plenty of pilot puns — and flying. Hannah Ann established that she isn't afraid of stepping into a small aircraft in the above post from January 2018,and noted in her Bachelor bio that "she travels the world for work and would love to find [a] man to join her on the adventure."

Could that man be Peter? Maybe — the rest of the contestants just may not like it very much.